City-run hostel has been hijacked by criminals 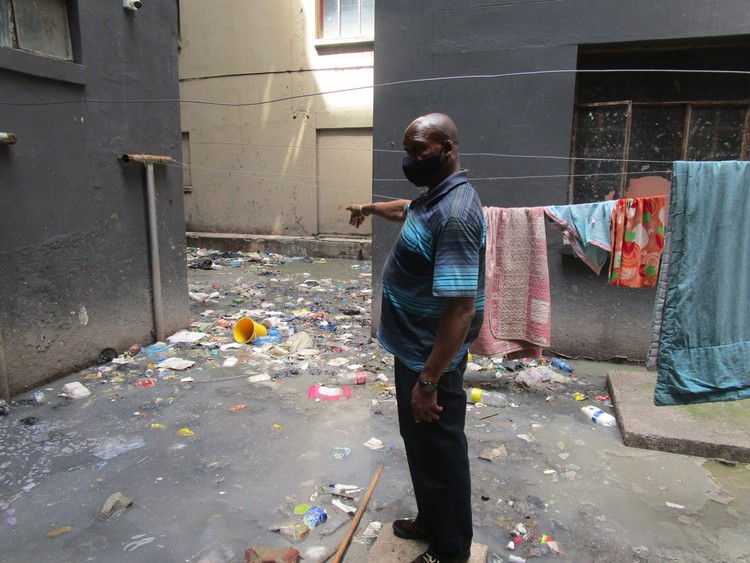 The City of Johannesburg relocated hundreds of people to this old hospital building about 14 years ago. The building is in a terrible state and has been taken over by criminals. Photos: Kimberly Mutandiro

About 400 people were relocated to an old hospital building in Johannesburg’s inner city following their mass eviction by the City of Johannesburg 14 years ago. Since then more people have moved in and those living there say their living conditions have become unbearable. They say the City did not charge them rent, but now they are being charged rent by criminals who have “hijacked” the building.

The building is known as MBV (Phase 1) in Joubert Park near the edge of Braamfontein, close to the city centre. The project once represented a success story for poor inner-city dwellers.

The families were among about 67,000 people evicted from the inner-city’s mnyama ndawo buildings. At the time, over 100 families represented by the Centre for Applied Legal Studies, opposed their eviction from two buildings called San Jose and Zinns. They argued that their eviction was unlawful and that the City had failed to provide evictees with alternative accommodation. In 2007, the matter ended up in the Constitutional Court which ruled that the City must “meaningfully engage” occupants and provide alternative accommodation. Families from the San Jose and Zinns buildings were then relocated to the old hospital which was converted into what was meant to be a temporary hostel.

Since then this hostel has become a nightmare for its occupants. The building has a dilapidated communal kitchen, dining room and laundry, and the shared toilets and bathrooms no longer work. The building is surrounded by ankle-deep sewage water filled with excrement, disposable nappies and other rubbish dumps. Mouldy water leaks can also be seen in most corridors.

Men share smaller rooms and there are slightly bigger rooms for families. Residents say a security company was appointed when they first moved in, but the building is no longer being monitored.

They say since the building was “hijacked”, alleged criminals charge rent of R250 a month for a room shared by up to ten people. Some bigger rooms are “rented” for R1,800 per month. Many people GroundUp spoke to say they live in fear of these self-proclaimed landlords. They say their attempts over the years to get the City to resolve the issue have been fruitless. 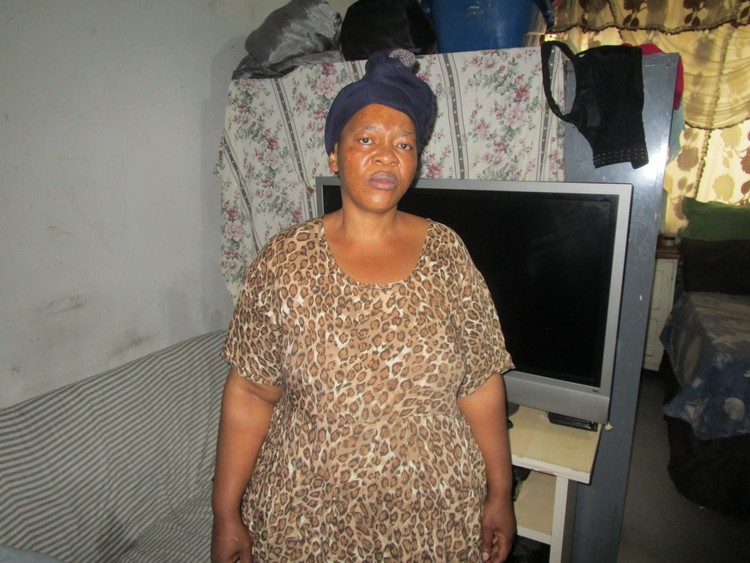 Nthombi Khumalo has lived in a single room with her eight children and grandchildren since 2008. The small space is divided by curtains for some privacy so that members of the family can relieve themselves in a bucket and wash. “We are not safe here and the place is too small, but we have no choice,” she said.

Nelson Khethani was among those evicted from San Jose in 2004. He moved to Johannesburg in search for better job opportunities but has struggled to find anything permanent. “We have no real place to call home,” says Khethani. He lives in one of the larger family rooms which barely has enough space for his furniture.

Khethani said he was forced to send his wife and children away because of safety concerns in the building. “When the City brought us here everything seemed okay. Little did we know that we would be sitting in a sewage pool, toilets are blocked, thieves do as they please and there is no maintenance. The building has been hijacked right under their noses,” he says.

Like most residents, Khethani says he has no choice but to continue living there because he relies on piecemeal jobs in the inner city and can’t afford rent.

The Socio-Economic Rights Institute of South Africa (SERI) and some residents are asking the City to improve the living conditions at the hostel. “The building is not properly managed by the City. There has been a blockage at the property since October 2021 and to date has not been fixed. There is also no caretaker. Anyone has access to the property, to an extent that there are a lot of illegal occupiers,” said Tebogo Tshehlo, a candidate attorney at SERI.

City spokesperson Nthatisi Modingoane blamed the state of the building on frequent incidents of vandalism and theft. Modingoane said many people had since moved in unlawfully which had complicated matters for the City.

“In January 2020 the City was planning to evict the illegal occupants, but due to Covid these plans were delayed. The plan is to convert the building into affordable rentals,” he said. Modingoane said only five qualifying families from the initial group had been allocated RDP houses “because most residents in the building do not qualify for housing”. He did not respond to additional questions about when the City planned to assist residents.

Next:  In Fort Beaufort the children eat fish caught next to the sewage pipe

Previous:  “Maggots crawl up your legs”: toilets in Siyathuthuka settlement are filthy

Dear Editor
In response to your article on the city-run hostel, there are serious issues in Parkhurst as well. There is a derelict council building on 12th Street, Parkhurst that is currently housing drunks and criminals and should be condemned as it is structurally unsound with a crack down the one side of the entire building.
There are also criminals selling liquor and drugs out of the old Parkhurst bowls club with a brutal attack on two nearby residents in 2020 with a machete where residents believe the attackers came from the bowling club. It is getting worse with the bowls club being up for tender but the tender failing as there is no way to get the squatters out of the building despite numerous attempts from the residents in the area.