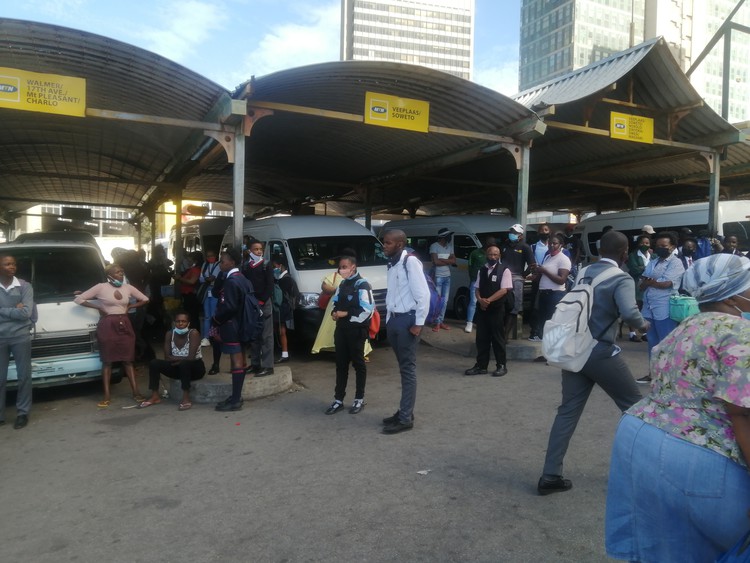 Over 2,000 taxi owners and drivers disrupted services at the taxi rank in Gqeberha city centre and the Korsten taxi rank in Durban on Tuesday. They are demanding answers about their Unemployment Insurance Fund (UIF) Temporary Employer/Employee Relief Scheme (TERS) funds.

Now the Port Elizabeth District Taxi Association (PEDTA) is threatening to sue the Department of Labour in Port Elizabeth for sharing the payout details with its members. The department’s provincial spokesperson Ziphozihle Josefu did not respond to GroundUp’s questions by the time of publication.

The protest on Tuesday, from at 10am until about 4pm, left scores of commuters stranded.

In Port Elizabeth, driver Thobela Koyi said he went to the labour department on Tuesday and got a printout of his payment. “I was shocked when I was told that I should have received about R19,900 from 8 to 22 January. But I only received R1,952.”

Another taxi owner, who asked not to be named, said he discovered that he was meant to get R19,000 instead of the R1,900 he received to date.

Commuter Busiswa Mpande from Motherwell who was stranded in the city due to the protest said, “This is unfair. I come from work but since 2pm I have been waiting for a taxi. I was supposed to fetch my eight-year-old daughter from school in Motherwell, but now she will get lost.”

Vusumzi Tom, taxi owner and a representative of the disgruntled group said they questioned how the TERS funds were being distributed. Tom said they had since agreed with the association’s executive to speed up the payment process and to allow people to still submit outstanding documents. All the payments are expected to be made by this Friday, he said.

Commenting on the protest, Ayanda Qoko general secretary of PEDTA ,said, “This was uncalled for. The taxi drivers should have approached us and asked for clarity. The taxi owners have distanced themselves although we asked them in June when we applied for this UIF/TERS to submit all the necessary documents including for their drivers. Now they see others receiving their money and are causing all this chaos.”

Qoko said despite first applying for UIF/TERS in June 2020, they only received the first payment in January. This, he said, contradicts what the department told people which was that the first payment was made in October.

“According to the payment spreadsheet from Labour, we received money for 877 owners and drivers. We have already paid about 700 of them and some have not come forth due to various reasons. But we have made a provision for them so that we can finalise these payments by Friday. Unfortunately, I cannot divulge how much we have received,” Qoko said.

Qoko said Labour officials should be held accountable for “sowing divisions” by divulging the association’s information.

“I can be killed or my house be torched because of their irresponsible actions. They know this industry has a history of violence. They need to be stopped and we will consult our legal team,” he said.