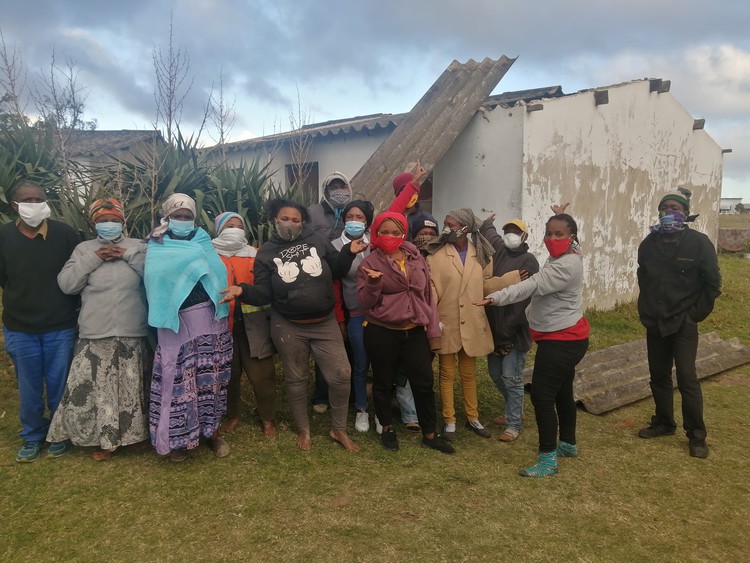 The cash-trapped owner of Western Meadows farm near St Albans, Port Elizabeth, has been accused of constructively evicting people living on her property. Photo: Mkhuseli Sizani

The owner of Western Meadows farm near St Albans, Port Elizabeth, has been accused of attempting to constructively evict people living on her property by removing their roof and switching off services.

While the roof has since been put back, the families still fear that deteriorating condition of their home and that the lack of electricity will force them to leave.

The owner admitted to removing the farm dwellers’ roof but denied switching off services to the house. She says the families are not keeping to an agreement made six years ago that they would move out so that she could sell the property.

According to owner Elma Rautenbach, she bought the farm in 2005 with six farm dwellers living on it, who used to work for the previous owners. She said that the six people living on the farm had agreed on getting R20,000 each to find alternative housing. When asked, Rautenbach said she no longer had copies of this agreement.

She said three of the farm dwellers had since left the farm but the other three remained with their families. There are about 25 people including children living on the property.

Mbhangisi Speelman, 62, said he has lived on the farm since 1974. He said their trouble started when Rautenbach bought the farm. “She cut off our water supply, never fixed our damaged electricity and removed the roof from our toilet. We had to ask for surrounding farms for water for many years until the municipality gave us water. For toilets, we relieve ourselves in bushes and use firewood for cooking,” he said.

Speelman said they were asked to sign the papers and accept R20,000 as compensation to leave the farm. “I rejected her offer. People felt threatened and we accepted the money although I never signed her papers. When Nelson Mandela died, she arrived at my house and smashed all my windows with a spade while I was inside with my children. She told me to get out of her farm,” he said.

“I told her to find a place for me, my six children and three grandchildren. The R20,000 could not even buy an RDP house,” he said.

Thembile Buya told GroundUp that he had been working in the farm since 1992 until the previous owner died in 2005. “We were planting grass on this farm and selling it. But immediately lost our jobs and she [Rautenbach] rented out the farm to another company and we never got jobs from it.”

He said Rautenbach had asked them to pay R100 each monthly for rent. “We told her that we couldn’t afford that money because we were jobless,” he said.

Last week, community leaders from St Albans were called to intervene at the farm when Rautenbach had removed the roof of one of the houses in an attempt to get the family out.

Ntomboxolo Ntuli, 26, who lives in the house where the roof was removed, told GroundUp, “On Tuesday she [Rautenbach] arrived and told me that by Thursday I should be ready to leave her farm. She said she was hungry and bankrupt because she had sold all her cows and the farm where she lives. She wants to sell this land too and get the money.

“She came back on Thursday with her three friends at about 9am while I was sleeping with my daughter aged three. They climbed on the roof and removed the asbestos from my room and lounge while hurling insults,” she said. Ntuli said her parents were given the R20,000 and no longer lived there.

Ward 40 community leader Mxolisi Buya, Thembile’s brother, said, “I was informed about this illegal eviction. On my arrival I asked the owner to talk to me so that I can be able to address the community. But she was arrogant and insulted me. She said this was her land and she wants to sell it because she is bankrupt.”

Buya said they warned Rautenbach that legal action could be taken against her for evicting people during lockdown as it is prohibited during this period. “She then left and threatened that she will give these people until the end of the month.”

In response to questions, Rautenbach who lives in Stutterheim, said, “I wanted them to honour our agreement we had about six years ago. I negotiated with six of them that I will give them R20,000 each so that they can go with their families … I took out a loan in order to pay them. I even told them that they can demolish the houses and take the material and rebuild with it,” she said.

She said for many years, she has been battling to get the three remaining families off her farm. “The children of those workers who had left came back and occupied two of my houses and other strangers have erected shacks. One of my houses was burnt down and someone was killed there. I constantly get complaints from other farmers about these people,” she said.

Rautenbach admitted that “through frustrations” she had broken Speelman’s windows, but said she never cut off the water supply and electricity. “I asked for R100 rent from them in order to fix their toilets because they were relieving themselves on the floors. The electricity cable was stolen and I fixed it. But again it was damaged and the cable was stolen again,” she said.

Rautenbach said she has serious financial problems after resigning from her job four years ago. “My shop shut down and I am still repaying the R120,000 loan that I took to pay them. No buyer wants to buy my farm with people living on it.

“Last year in November and December, I asked them again nicely to leave. But they said it was Christmas and asked me to wait until the festive season was over. Two weeks back I gave notice that I was expecting them to leave. No one has made a move … Yes, I removed the roofs in two houses but on Friday I went back and put back the roof,” Rautenbach said.

Buya said they will meet with Rautenbach this week and try to resolve the issue.

Next:  Shack with a swimming pool and Table Mountain view