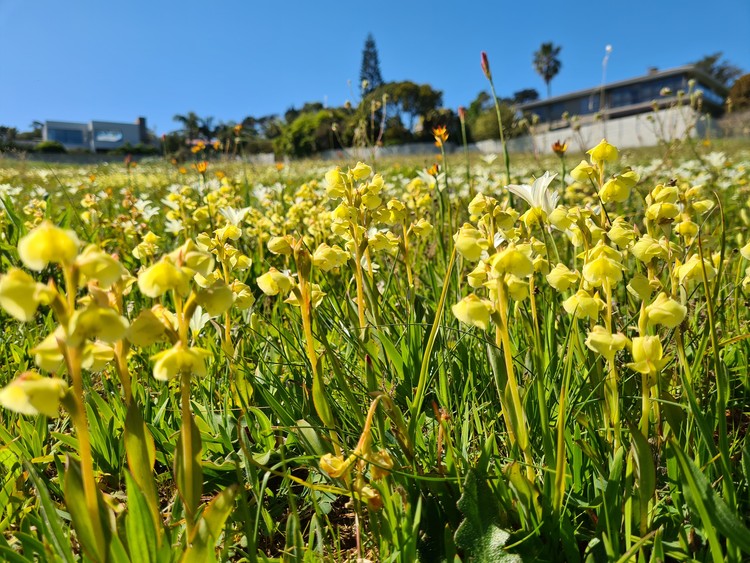 Wildflowers in Lincoln Park, Cape Town. Delaying the mowing season in the city’s parks is a boost for biodiversity, says the author. Photo: Rupert Koopman

With the coming of spring, displays of flowers in parks in Cape Town can easily rival the famous daisies of Namaqualand. This is because the City of Cape Town stops mowing in spring, and mowing will start even later this year.

The announcement by the City of Cape Town that the wildflowers in some of the city’s parks won’t be mowed until the end of November might have escaped most people’s attention. Yet it is a critically important move if the city is to preserve its famed biodiversity.

Research on how this biodiversity can be better managed to improve both human access and animal movements (and gene flow) has shown the importance of letting the wildflowers grow until the end of the seed-producing period, rather than mowing them down as soon as the flowering peak has ended.

For the third year running, the City has decided not to mow selectively in spring. And in a recent press release, the municipality announced that this year mowing will be suspended in selected parks until the end of November.

This is excellent news as spring mowing must be stopped for two and a half months if urban flowers are to finish producing seeds. After two years of monitoring the spring reproductive season for more than 20 species of indigenous bulbs and daisies that grow wild in the city’s parks and road verges, I found that the City’s previous two-month suspensions had not been long enough to allow the plants to reach maturity.

After the flowers have finished, the wildflower seeds take an additional month to reach maturity. When cut in September, the flowers don’t bloom at all. And if they are cut too soon in October, we lose the following year’s seed bank, along with the food it provides for fledglings and other small animals.

However, the flush of flowers does present problems, which will need to be managed in the years to come. I am most worried about the potential spread of invasive weeds, especially Echium spp (known as Patterson’s curse because it is poisonous to livestock). The peak Echium flowering season is in the second half of November. There are two species of Echium that are noxious and invasive in our region. My observations of the Echium cycles suggest that they go straight to seed almost as soon as the flowers appear. This means that mowing spreads the seeds, so waiting until the very end of November to mow will help the Echium to spread.

Fortunately, researchers in Australia are investigating potential biological solutions to the Echium invasion.

I think we need to be mowing in July to prevent the invasive grasses from becoming too dense during spring. Unfortunately, mowing is not done routinely in July because the municipal budget comes to an end at this time and nothing happens while we wait for approval of new budgets, which usually happens at the beginning of August. The contractors also prefer not to mow during the winter storms.

The City of Cape Town and the Overberg Municipality have both acknowledged that the suspension of mowing means we will have to tolerate long grasses and grass seeds during late spring.

As an example, by the end of October, the wild oat grass on Alphen Common was taller than I am (165 cm). Alphen Common is not currently one of the places where mowing is suspended. I think it should be, and ideally, there would be collaboration with nearby stables to graze horses there and prevent the oats from getting that tall!

Ultimately, the City needs to supplement the mowing suspension by employing contractors to undertake weeding during spring.

For years, conservationists have called for specific areas to be spared the chop where there are plant species of conservation significance. This has resulted in a stalemate between city landscapers, road-safety maintenance managers, and those concerned with biodiversity objectives. Within the urban context, there are (often competing) layers of use and objectives for every square meter of land. This adds complexity to objectives that may seem straightforward on the surface.

If mowing is suspended, additional management is generally recommended. Either burning or grazing prevents overgrowth and makes space for the growth of more sensitive species. In Europe, rewilding projects use animal livestock to maintain open habitat, while in South Africa, Petro Botha has tested the use of eland with similar objectives in the Cape’s local nature reserves.

Long-standing traditional systems of urban grazing exist in many peri-urban and informal areas in South Africa. From a biodiversity perspective, agricultural grazing is too intense and does not allow wild plants to establish themselves, whereas casual and occasional grazing does.

The Namaqualand daisies that people flock to see every spring on the West Coast are the result of disturbance in the renosterveld and strandveld ecosystems. Fallow fields returned to the wild quickly become home to pioneering daisies. Fields that were grazed, rather than ploughed and planted with crops, resprout flowers from bulbs lying dormant in the soil.

Closer to the city, the length of the M5 from Rondebosch East to Ottery is currently awash with the yellow blooms of Senecio and Cotula indigenous daisies.

The area between Vasco and Joostenburg is also a renosterveld ecosystem. Groups such as the Botanical Society and the Weltevreden improvement district are negotiating no-mow areas in their local parks and are implementing projects for wildflower corridors throughout their neighbourhoods.

All over Cape Town, the parks benefiting from the mowing suspension are in flower. The City has asked residents to identify parks and open green spaces with a rich fynbos floral spring to be spared the chop during the spring flowering season.

In the long-term, a mix of solutions could be implemented, but for now, strategically adjusting the mowing schedule is the most accessible tool we have for urban park management and these early steps should be celebrated.

Dr Peta Brom is a postdoctoral research fellow at the University of Pretoria. This article is based on her doctoral research which investigated pollinators and flower phenology in Cape Town. Rupert Koopman, of the Botanical Society, contributed content and editing suggestions.

Previous:  Judge rules that “Kill the boer - Kill the farmer” is not hate speech