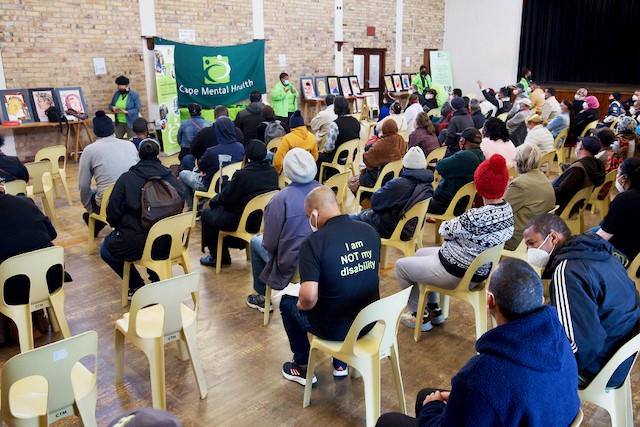 About 70 members and people who use the services of Cape Mental Health gathered at the Observatory Community Recreation Centre last week to express themselves and share their experiences with psychosocial disabilities. Photo: Ashraf Hendricks

Members and staff of Cape Mental Health gathered last week to share stories, poetry, art and dance to combat stigma and create awareness around mental health. With the theme “In my own words”, the event was held at the Observatory Community Recreation Centre. July is Psychosocial Disability Awareness Month.

Cape Mental Health and the South African Federation for Mental Health are campaigning for psychosocial disabilities, led by people who experience them. The campaign encourages self-expression, understanding, inclusion and support.

According to a 2021 report by the South African Depression and Anxiety Group, one in three South Africans have or will have mental health issues in their lifetime, yet only one in ten people with a mental illness have access to mental health care. These are “pre-Covid” figures.

At the event, a peer supporter, who only wanted to be known as Howard, shared a poem about his experience with schizoaffective disorder, a combination of schizophrenia and bipolar. He described his mood swings, delusions, loss of control and paranoia: “Suddenly, without any reason I start to cry / All I can do is endlessly wonder why / The most trivial of things seem to break my heart / Piece by piece I feel myself being torn apart [Extract from the poem]”.

“It felt like being in this dark hole,” he said. “People need to know that things like this can happen to anybody”.

With the help of the Fountain House, a psychosocial rehabilitation programme under Cape Mental Health, Howard managed to gain control and insight into his condition.

Clement was struggling with depression when he joined the Fountain House programme in April. He shared his story about how a brain haemorrhage and the death of his father left him deeply depressed for two years. “I was very isolated … I felt ashamed of myself,” he said.

When he joined the programme he immediately felt welcome.

“I’m out of my depression and off my anti-depressant tablets,” he said.

Clement said group events like these made him feel less alone. “There are people out there struggling … but they’re trying to live with their diagnosis … So I have more hope for the future”.

Barbara Meyer, communications officer for Cape Mental Health, said that one of the major issues for those with psychosocial disabilities is finding work. Meyer said that workers with mental issues face prejudice and stigma from employers regardless of work ability. Many employers are “ignorant”.

“Once a person discloses that you have a mental illness … your name will go to the bottom of the list,” she said.

People with mental disorders are also often mistreated socially, they get taken advantage of when it comes to legal issues, and their opinions are “less valued”, said Meyer. “They’re not respected,” she said and “their psychosocial disorder is used against them”.

“We’re about creating opportunities for people to become empowered, to grow,” said René Minnies, manager of the Psychosocial Rehabilitation programme.

Minnies said art and writing workshops were held leading up to the day’s event. “We wanted to showcase the journeys, the struggles that people have, the isolation, the stigma,” she said.

Minnies said that psychosocial disabilities are widely misunderstood. She said that managing a mental illness is much like living with diabetes. “We don’t discriminate. We don’t judge. We don’t stigmatise because we’ve normalised it”.

Next:  Parks for the people: everyone needs green spaces