“As a community we need to strive to adapt to change, yet uphold our rich cultural and religious beliefs and practices,” said Yasin Moses, an executive member of the Bo-Kaap Youth Movement (BKYM), during its first press conference in Cape Town on Thursday.

“Our objective has never and will never be self enrichment … We want to contribute positively towards uplifting our community and help create sustainable opportunities for the future leaders of our community,” said Adnaan Oesman, BKYM chairperson. “We wish to find common ground with all community stakeholders to uplift our community and preserve our heritage.” He said BKYM was formed in May 2018 and registered as a non-profit company on 23 August 2018.

BKYM has recently been accused of receiving money for agreements made over the development of 40 Lion Street in Bo-Kaap by BLOK. The leadership denied this. “We the Bo-Kaap Youth Movement … can truthfully and honestly say that we have not accepted any compensation in any form whatsoever [from BLOK],” said Oesman.

“To date, the only agreement that we have with BLOK is to find a peaceful solution going forward,” he said. BLOK confirmed this in an email to GroundUp. “We feel that BLOK should contribute towards uplifting our community,” said Oesman.

BKYM said it does not claim to act on behalf of the Bo-Kaap community, but “has the interests of the community at heart”. 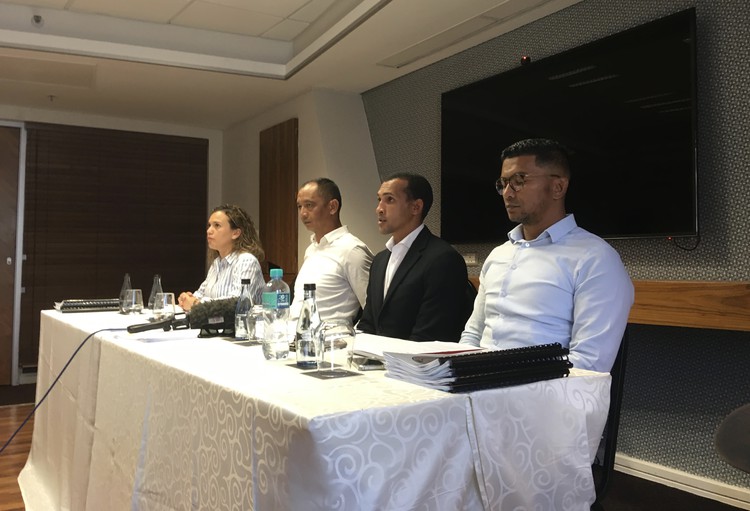 Earlier this year BKYM began protesting against development in Bo-Kaap. Burning tyres became a regular sight at the entrance of the neighbourhood.

“In May [2018] the protests escalated to vandalism because we were told that developers were coming into our area and building without community consultation and consent from the authorities,” said Mujahid Hartley, BKYM vice-chairperson.

He said that in the months that followed BKYM performed “due diligence” and learned that the sale of the property at 40 Lion Street to BLOK was legal and that the developers had in fact approached and consulted with the Bo-Kaap Civic and Ratepayers Association (the Civic).

Hartley said they also learned that the Civic had “commented in favour of excavation and noted no objection to the proposed development [at 40 Lion Street]” on an archeological permit application by BLOK in February 2018.

BKYM handed out documentary evidence of this information in the form of printed copies of extensive email correspondence between BLOK and the Civic.

It was then that “BKYM stopped protesting and starting looking for a positive solution to enhance the community,” said Hartley.

“That letter doesn’t say BLOK can go ahead and build … It is taken out of context … We didn’t give the go-ahead to the development, we gave a comment on an application,” Poking told GroundUp by phone. “Heritage Western Cape is still the authority, they in turn had to approve it. They had asked SAHRA [South African Heritage Resources Agency] for comment as well. We were one of the parties commenting, we are not the authority to approve development or prevent it.” The authorities subsequently granted the permit to BLOK.

According to independent heritage consultant Quahnita Samie, the National Heritage Resources Act has various sections that can be triggered when it comes to potential development. The section relevant to the 40 Lion Street site was section 35, which relates to archeological resources, hence BLOK’s archeological permit application.

“Section 38 relates to Heritage Impact Assessments but because the site is under 5,000m2 this did not apply. Section 34 relates to structures older than 60 years but because no such structures were on the site, it was also not triggered by the development application,” said Samie.

However, Poking said the Civic felt a Heritage Impact Assessment should have been done “due to the significance of the site”.

BKYM also agrees that preserving the heritage of Bo-Kaap is important. Moses said that the organisation has submitted nominations to SAHRA to have the Tana Baru Cemetery and Auwal Masjid declared National Heritage Sites, as well as for the protection of Bo-Kaap as a living heritage site on a national level.

Civic and Youth Movement at loggerheads

Oesman said that they have always been willing to work with the Civic but they had not been shown the same willingness in return. “Whatever we do we always involve [the Civic] … because they are the authoritative body so basically everything has to go through them,” said Oesman.

“In order for this community to go forward and for everyone to benefit there has to be some form of unity and we need to find common ground,” he said. “We are open to sit down and talk to them but they should be open to listen to us as well.”

But Poking said the Civic had already called for talks. “We are asking them to come forward … and speak to the community and speak to us so we can see how we can move forward”. She said that in a recent public meeting in Bo-Kaap the president of the Muslim Judicial Council had made the same call to the leaders of BKYM.

Hartley said that BKYM will host a public meeting on 6 December 2018 where they will “address the community … because we feel that we owe it to the community first, and then from there we will address the Civic”.

Shahied Ajam, chairperson of the District Six Working Committee, attended the press conference. “We can’t be having these spats anymore, there is a generation coming after us that we have to think about,” said Ajam. “I think it is about time that the Civic and the BKYM get together and talk about the future … I think you should be forthright and state your objectives clearly to the world out there. They are watching and we are watching you. We would love to follow your example.” People applauded when he finished speaking. 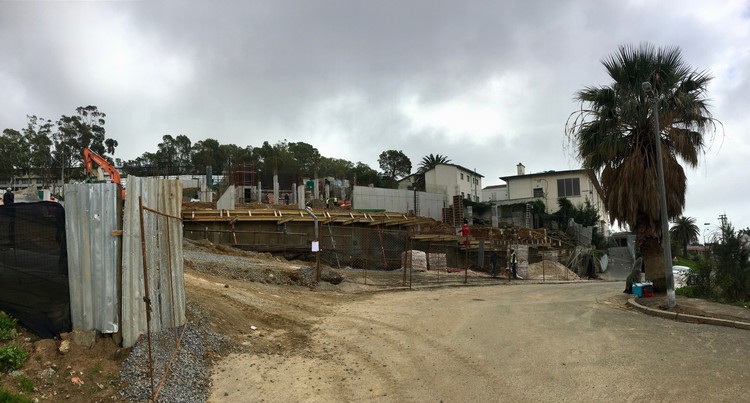 Construction on the apartment block on 40 Lion Street in Bo-Kaap being developed by BLOK began in early 2018 and is due for completion in mid-2019. Archive photo: Aidan Jones

According to the provincial Environmental Affairs & Development Planning department, the urban population in the Western Cape will increase by 2 million by the year 2040, with the City of Cape Town listed as one of three “growth hotspots”, the West Coast and Cape Winelands Districts being the other two.

With an increase in the urban population, densification is going to become more important over the coming years if the City is to avoid a housing crisis. “If we don’t welcome density in well-located areas of our city then we must accept that more urban sprawl will take place on the periphery … Urban sprawl leads to exclusion, as many people are forced to live very far away from the jobs, services, and amenities that well-located areas provide,” said Nick Budlender, a researcher at Ndifuna Ukwazi.

Afrobarometer, a research network that conducts public attitude surveys on issues related to governance, questioned 1,800 South Africans in August and September 2018 and found that housing is the third most important issue people think government should address, behind unemployment and crime.

Next:  “The so-called future of this country is dying”