Blouvlei crèche survived apartheid but may not survive Covid-19 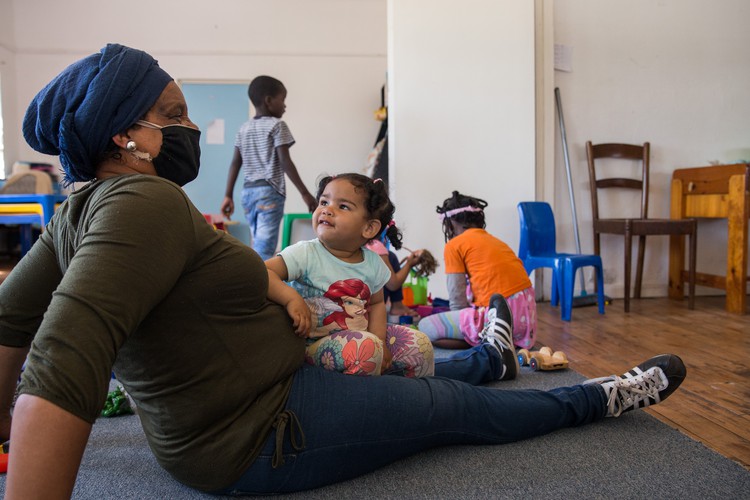 Marvine Isaacs, who teaches at Blouvlei, and her one-year-old daughter Israh, who attends the nursery school. All photos: Ashraf Hendricks

Blouvlei Nursery School was started in the 1950s by struggle heroine Dora Tamana in her shack in Retreat. The nursery school continued to grow, through the apartheid years and beyond, but now Covid-19 is threatening its survival.

Before the March lockdown, the school had 55 children and five staff members: three teachers, a cook and the principal. Since it re-opened in September, only seven children have returned, leaving the centre and its staff with very little income.

“Everyone is saying it’s the last term. They rather keep the children at home until next year,” says Fatima Elloker, who has been the principal at Blouvlei nursery school since 2002.

The pre-school does not have government support so all the money for staff salaries, food for the children (who get lunch and a snack) and building maintenance come directly from fees of R700 to R900 a month. Sometimes parents are still unable to pay. “Sometimes it’s a single parent. Sometimes they are unemployed,” says Elloker. Due to the shortage of income, the number of staff has been cut down to three and their pay has been slashed.

“I can’t have all the staff back because there are no children,” said Elloker, who decided to reduce her own working hours so that more money can go towards the staff. 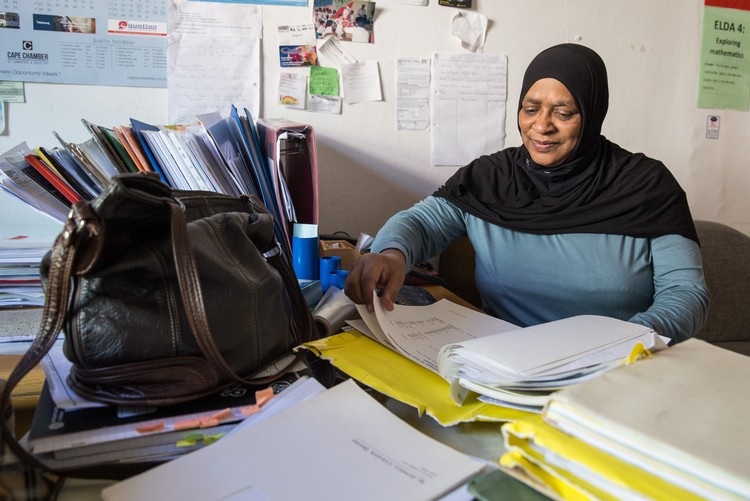 Fatima Elloker became the principal of the nursery in 2002.

When Elloker took over the pre-school in 2002, she said, things were already difficult as the centre was in arrears. Rates, telephone bills and butcher’s accounts had not been paid. “We had a lot of debt,” she said.

Now with lockdown, the rates account is still in arrears, she says. “Nothing has been paid since March.”

During lockdown there were several burglaries. Copper piping and a double door were stolen and had to be replaced.

Early childhood development centres were closed during the first phases of lockdown but in terms of a court order in the North Gauteng High Court, were allowed to open again in July. However, the Blouvlei centre did not open for another month.

Marvine Isaacs has been a teacher at the centre for four years. She attended crèche there herself in the 1980s and has three children who all went to Blouvlei. If the centre closed it would “be bad,” she says.

Before the lockdown, Isaacs was paid R3,000 a month. Now, with so few children attending the nursery school, she has had to take a drastic pay cut. She says her taxi fare for the month is about R500, leaving her with very little.

“At the moment I’m not coping,” she says, and with the holidays coming up she is concerned. “In December, my children won’t be having Christmas clothes. It’s really sad.”

When Blouvlei Nursery School closes for the year on 15 December, Isaacs says she’s not sure what she’ll do for income. She is yet to pay the full school fees for both of her children aged 11 and 16. She hopes that things will improve with the new year. 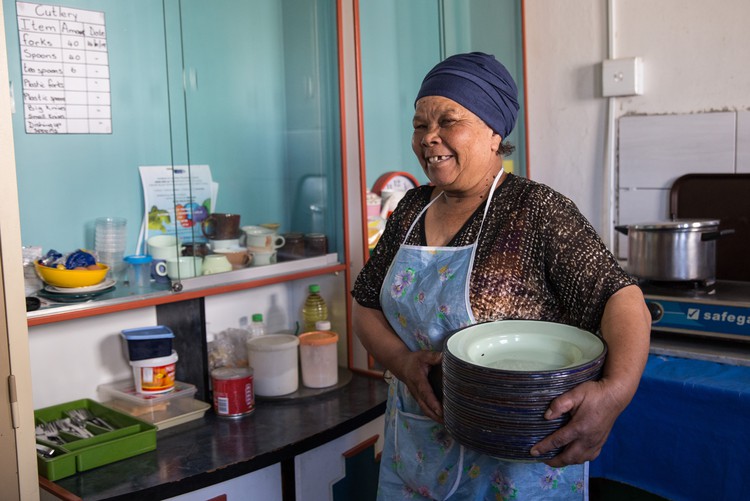 Louise Isaacs has been working at Blouvlei nursery since 1991. Her grandfather worked there and her children and grandchildren all attended the nursery.

Isaacs’s mother Louise is the cook at Blouvlei. She started in 1991 as an assistant to her sister who was the previous cook. “This school Blouvlei is from generation to generation,” says Louise Isaacs, who is now 62.

Her grandfather worked at the nursery school as a gardener and her three children and five grandchildren all attended the school. “Blouvlei means everything to me,” says Louise, who calls the school her “second home”. She says she doesn’t know what she’ll do if the school closes as this is her only income apart from her pension.

Tommalene Cozett has been a teacher at Blouvlei for 18 years. She says that the pandemic has made things tough. “Emotionally I’m drained,” she said. “People don’t like paying school fees, so we suffer as teachers because we don’t get paid on time,” she says. “We are trying to make ends meet with what we’ve got.”

Cozett is a single mother and the nursery school provides her only income. Her mother worked at the same school.

Elloker says Blouvlei means a lot to her. Her children as well as her siblings’ children all went to the nursery school.

Some parents have donated groceries and detergents. Elloker says the school has never needed to ask for donations or “handouts” before. “But this time we have to ask.”

She too is hoping that things will get better in the new year. “We must pray a lot,“ she says.

If you wish to assist the school, please contact Fatima Elloker on 078 817 1419 or felloker@gmail.com. School banking details according to Elloker: Standard Bank savings account 276362772, 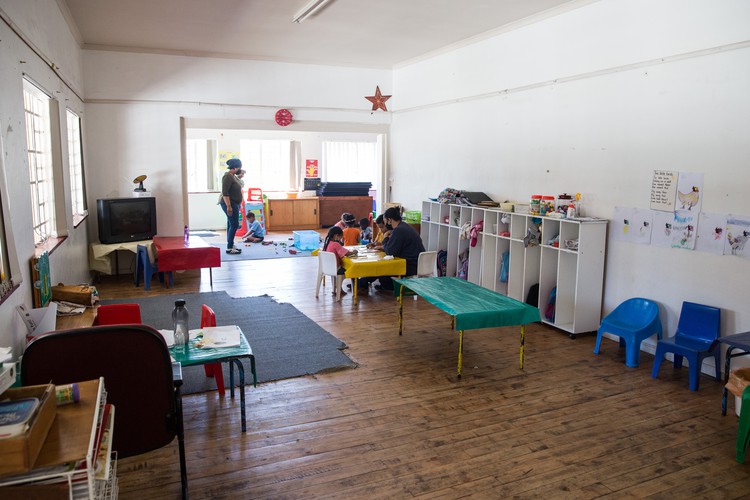 Before lockdown, the nursery had 55 children. Since it re-opened in September, only seven children attend. Staff have had to take a drastic pay cut. 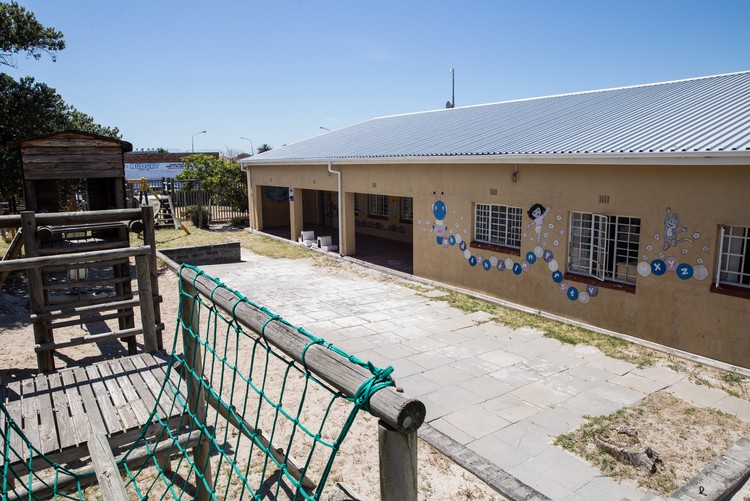 Who was Dora Tamana?

Dora Ntloko (Tamana ) was born in 1901 in the deep rural area of Gqamakwe in the Eastern Cape, near Dutywa. At the age of 12, her family was dispossessed of some of their land under the 1913 Land Act. She and her family were also part of the large squatter settlement at Ntabelanga, also known as Bulhoek, established by the evangelist Enoch Mgjimia who preached that the end of the world was coming, and that the laws of God superseded those of man.

Although all the details are still unclear, troops were sent to remove the squatters and 200 or more were killed in what became known as the Bulhoek massacre. Her father and two of her uncles died at Ntabelanga and she moved to Queenstown where she married another survivor, John Tamana. They moved to Cape Town to the informal settlement known as Blouvlei, in Retreat.

There Tamana, with five children, lived in a shack which was where the seeds were sown of what became the Blouvlei Nursery School. She looked after and taught her own children, while taking in others. Initially not having pencils or paper, let alone chalk and a blackboard, she used a stick to write letters and draw pictures in a smoothed sandpit.

But she was also part of the community fightback to stop government attempts to remove her and her neighbours from Blouvlei. In the process she joined the Communist Party of South Africa and the ANC and met fellow activists such as Jean Bernadt and Margaret Molteno who had supported the Athlone nursery school and the centre that had been established to train “non-European” nursery school teachers.

The first Blouvlei Nursery School and health centre was opened in June 1955 and catered for 40 children, with the teachers having been trained at the Athlone centre.

Next:  In damning judgment, court calls for Road Accident Fund to be liquidated