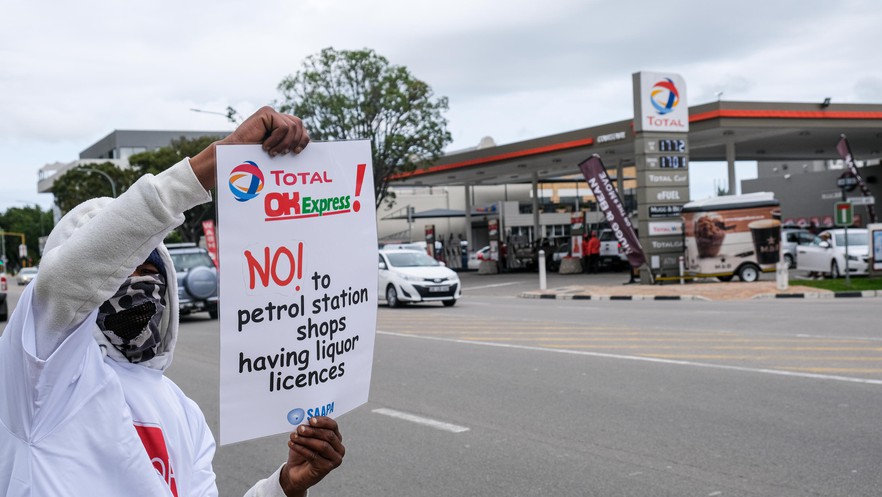 A group of activists who have battled addiction are campaigning for a change to the country’s alcohol laws. All photos: Daniel Steyn

“Maybe this is the way forward for me,” says Patrick Roelf, his chest heaving as he walks through the Wilderness forest: his smoker’s lungs are not used to hiking.

The hike was organised by SAHARA, the Smoking and Alcohol Harms Alleviation and Rehabilitation Association, as part of a training camp attended by users of SAHARA’s services, community activists, and volunteers. The association, based in George, is piloting a model to deal with substance addiction.

SAHARA operates in four communities in and around George: Thembalethu, Pacaltsdorp, Conville, and Blanco. The association provides a free, community-based out-patient service, for people who smoke or use alcohol or drugs problematically. The treatment is based on support groups and medication — services not currently available in George’s public health system.

Roelf is a member of the Pacaltsdorp support group, which is led by a trained behaviour-change counsellor, and he receives medication to treat his addiction.

As he chews on his nicotine gum, Roelf says the past two days have been the longest he’s gone without a cigarette in many years. He is two months clean of tik. This hike has led him to reflect and recommit to his journey of recovery, he says.

Roelf’s family had given him one last chance before they kick him out of the house.

Though his home in Pacaltsdorp is only a 15-minute drive from the nature reserves of the Wilderness, Roelf says this is his first hike. A childlike wonder overcame him and his fellow hikers as they reached their destination: some of them had never seen a waterfall before. 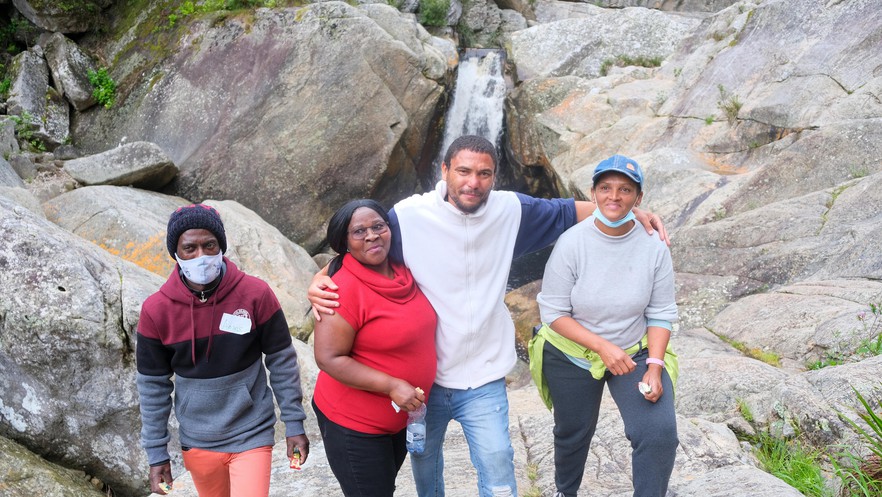 Patrick Roelf (second from right) and friends at the waterfall.

A group of teenage boys from Thembalethu township were the first to jump in the water, shrieking with joy. They told GroundUp boredom and the stresses of township life had led them to smoke marijuana and tobacco.

Alcohol is one of the leading causes of gender based violence in the country. Alcohol contributes to mental health problems, poverty, unemployment, and crime. More than half of road deaths in this country are related to alcohol, says the World Health Organisation.

South Africa’s public health system is overburdened by the harms of substance use: trauma cases, heart disease, cancer, and other conditions. These are expensive to treat in hospitals. SAHARA argues that it is cheaper to treat substance addiction in its early stages at primary-care facilities, rather than treating the consequences in public hospitals.

The medicine SAHARA provides is not currently provided for free by the public health system.

Reuter prescribes medication according to each patient’s individual situation.

Diazepam or naltrexone are generally given to people who drink alcohol problematically. Nicotine gums and varenicline are given to people who want to stop smoking. Heroin addiction is treated with methadone Opioid Substitution Treatment (OST). Tik use is usually associated with another mental health condition, such as depression, anxiety or psychosis; and these are treated with appropriate medications. 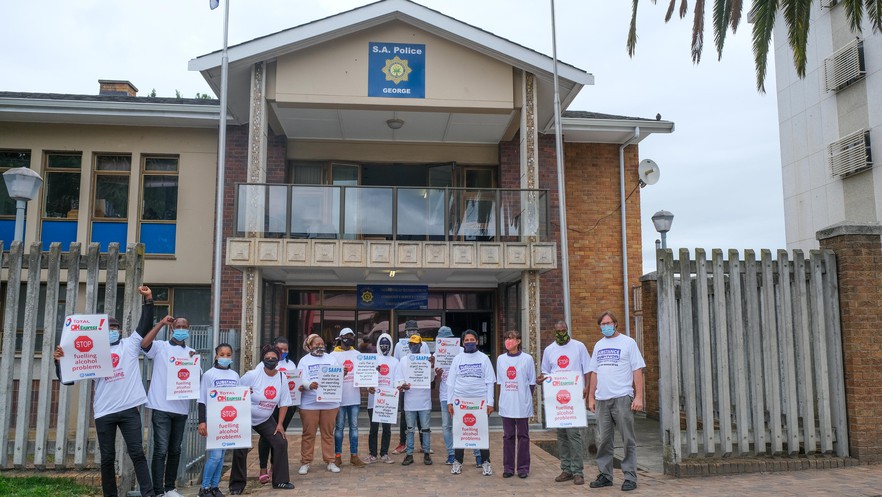 SAHARA members protest outside a police station as part of a campaign to change the alcohol laws. Hermann Reuter is on the right in the photo, wearing a “Substance Survivor” T-shirt.

“I started smoking when I was 14. I had tried to quit on several occasions with no assistance at all. Didn’t work so well,” says Nathan Dreyer, now in his thirties, who works at the Conville clinic. But after one month of taking varenicline provided by SAHARA, his cravings stopped and he hasn’t smoked since.

During a session of the Conville clinic support group, Dolly Mtshambela, a cleaner, tells the group about her experience with alcohol use disorder.

“I had a boyfriend … He abused me, physically, and in all other ways. We would both drink … He would abuse me, hit me. Then I drank pills to take my own life. Many times.”

Her life changed when she heard about SAHARA. She no longer walks around in the streets drinking, and with the medication from SAHARA she says her cravings are more manageable.

Sarah Lessing, a recovering heroin addict, was denied access to her daughter by social services because of her substance use. But after starting on methadone OST with SAHARA, and returning to a normal routine, she has regained full custody of her daughter.

She had previously enrolled at a private rehabilitation facility, from which she ended up running away. “I could get more drugs inside the rehab than I could outside. And for a cheaper price as well,” she says.

SAHARA’s approach combines pharmaceutical interventions with psychotherapy through support groups. Some form of spirituality or sense of purpose has been found to be effective in treating addiction. For many members of SAHARA, religion is an important factor.

Lessing says that SAHARA’s support groups and broader mission are important to her sense of purpose. Members of the SAHARA family become part of something bigger: a group of people affected by substance use disorder in one way or another, who are advocating for alleviation of harm caused by substances. 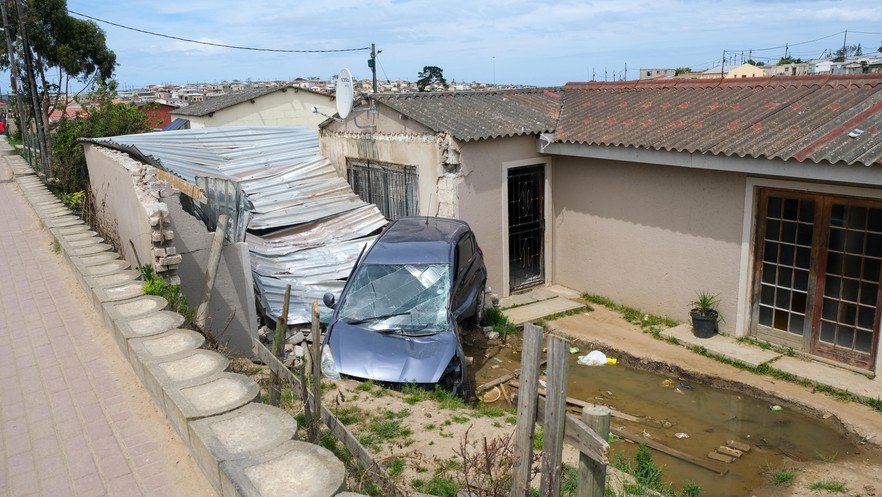 The driver of this car was returning from a shebeen, when he lost control of the vehicle. It broke the fence of this house and landed in its carport.

Attendees at the SAHARA training session at a campsite in the Wilderness shared the challenges of living in their communities: the availability of alcohol, the normalisation of substance use, the stresses caused by poverty, and the boredom experienced by young people.

The group made three key resolutions. Firstly, substance use disorder should be treated at primary-care facilities (clinics) in communities throughout the country.

Secondly, substance use disorder should be seen as a treatable disease and not as criminal or immoral.

They agreed that the circumstances in which people live and their community structures play a key role in causing substance use disorder. There was also an acknowledgement that the services provided by SAHARA are limited because people return to homes and communities that are not conducive to successful recovery.

The perception of substance use disorder must change, says Thembinkosi Makhawa, youth coordinator and behaviour-change councillor at SAHARA. His focus is to recruit young people from Thembalethu who have started drinking, smoking, or experimenting with drugs.

Working with young people who start smoking tobacco and marijuana, often laced with tik, Makhawa understands the root causes of the problem. “The youth of Thembalethu don’t have anything to do. They are inactive and the only things that they are exposed to are alcohol, drugs, and tobacco,” Makhawa says.

Insufficient stimulation at school and the lack of safe, supportive environments outside of school, lead children to experiment with these substances, he says.

Tik addicts often break into homes in Thembalethu, stealing stuff they can sell for a fix. They also steal vital infrastructure, like copper cables. As a result, tik addicts are subjected to mob justice and sometimes murdered.

“See them as a patient, not a criminal,” says Makhawa. He acknowledges that it’s hard for people to treat drug addicts with compassion when they commit crimes, but maintains that there is no other way.

Neither mob justice nor the official criminal justice system will solve the problem, he says. The root causes are not addressed and prisoners are simply released into the same society and cause the same harm.

The perception of alcohol and tobacco also needs to change, SAHARA’s members say. At present, these substances are widely available and normalised. According to the South African Alcohol Policy Alliance (SAAPA), more than half of people in South Africa over the age of 15 who drink, binge drink, and half of teenagers in the country drink alcohol.

SAHARA is engaging with community, school, and church leaders so that they can work with others in the community to show the dangers of alcohol and tobacco.

SAHARA also plans to partner with the SAPS in the December Arrive Alive campaign to raise awareness.

Reuter argues that people have limited ability to control their consumption of addictive substances when these are so widely available and made glamorous. He says that alcohol and tobacco should be controlled and regulated by the government, not by individuals as “responsible drinking” campaigns suggest.

Tobacco is widely available in Thembalethu’s spaza shops. Liquor outlets, many of them unregulated by the liquor authority, sell an abundance of cheap liquor. While the legal age for buying alcohol and tobacco is 18, outlets often sell to underage drinkers, and many are next to houses or schools.

Taverns and shebeens are often frequented by the rich and powerful in township communities, and are also an important source of income to their owners and employees. Advocating against taverns and shebeens is not only unpopular, but also dangerous, Makhawa says. 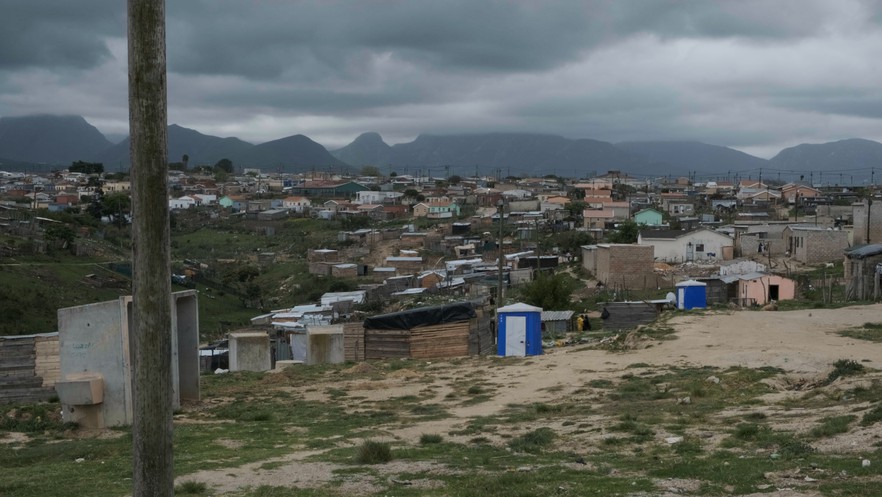 Thembalethu township in George. Young people we spoke to said that boredom and the stresses of township life fuelled substance addiction.

SAHARA is part of SAAPA, which campaigns for the passing of the liquor amendment bill. The bill, written in 2016 but yet to be passed by Parliament, would make key changes to regulation of alcohol, including raising the drinking age to 21 years, introducing a 100-metre radius limitation of trade around schools and religious institutions; banning alcohol sales and advertising on social and small media; and introducing a new liability clause for sellers of alcohol.

Smoking rates have decreased since tobacco control laws, including age restrictions and advertising bans, started in 1993. The liquor amendment bill can have the same effect, Reuter says.

But talking about the regulation of alcohol and tobacco is unpopular in South Africa. The tobacco and alcohol bans during the Covid-19 lockdowns highlighted both the importance of those industries to the South African economy and the reliance of South African society on alcohol.

Alcohol-related trauma cases in public hospitals decreased dramatically during the bans. When the alcohol bans were lifted, the trauma cases returned. But when SAAPA campaigned on the back of these bans, arguing that this evidence shows that stricter alcohol restrictions are necessary, they received backlash on social media.

SAHARA is inspired by the HIV/AIDS struggle for antiretroviral therapy. Dr Reuter was actively involved in that struggle, starting two treatment clinics: one in Khayelitsha and one in Lusikisiki.

The mobilisation of HIV-positive people was part of what made the movement so effective. Participants at demonstrations demanding free antiretroviral medicines would wear T-shirts reading “HIV-Positive”. This move directly confronted HIV-stigma and the government’s AIDS-denialism and displayed solidarity between medical professionals, activists, and people living with HIV/AIDS.

SAHARA’s objective would require resources and nation-wide mobilisation. But its members maintain that a mass movement of people affected by substance use disorder is possible, and can result in better regulation of substances, a shift in community perspectives, and free and effective treatment for substance use disorder provided by the state.

Next:  Philippi informal settlement residents say they are the “forgotten” community of Cape Town

Previous:  Young gardeners are building a fynbos corridor across the Cape Flats