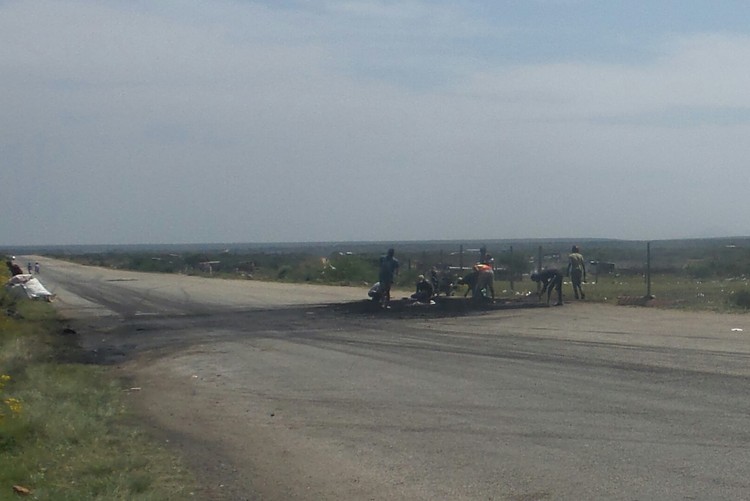 Protesters blocked the R334 road in Motherwell, Gqeberha on Tuesday to demand that electricity and toilet projects in their community be completed. Photo: Joseph Chirume

Gqeberha police are investigating a case of malicious damage to property after a truck was torched during a protest in Motherwell on Tuesday.

At the centre of the protest are complaints by residents of Khayamnandi informal settlement in NU29, Motherwell over electricity and dirty toilets. They blame the frequent change in leadership at the Nelson Mandela Bay Municipality for lack of development in the metro.

Protesters blocked intersections on the busy R334 road with burning tyres and heavy objects. Police spokesperson Gerda Swart told GroundUp that protesters stopped the Volvo truck driver, pulled him out of the truck and set it alight. She said no arrests had been made as yet.

A protester who did not want to be named said, “We have seen more than six mayors since 2016. This is affecting service delivery because whoever comes to lead brings their own projects and dumps what their predecessors had done.”

“There are electricity poles in our area that were installed a year ago but all came to a halt when a new government took over. Our toilets are overflowing with faeces. We desperately need help,” he said.

Another protester said they were tired of unfulfilled promises. “We have had several coalition governments but they have virtually achieved nothing. It seems they are only interested in holding onto power. Almost every aspect of service delivery is in shambles as politicians fight for power to lead the municipality.”

She said the community was in desperate need of more portable toilets and the installation of electricity meters. “They should finish the electrification of shacks that was promised by the late mayor Mongameli Bobani and the eradication of the bucket system that former mayor Athol Trollip preached so much,” she said.

Residents also blame ward 54 councillor Lunga Minyayo for failing to arrange a meeting with them on 14 October, which they claim he had previously agreed to. But Minyayo said he was shocked when he was alerted to the protest.

He said Khayamnandi, established in 2019, has 419 shacks. He said there are five other informal settlements in his ward which are in phase one of the municipality’s electrification project.

“In March, I started establishing the Informal Settlement Project Committees. We have been meeting several times with various municipal project managers and service providers and the former Mayco member for Electricity and Energy.”

Minyayo acknowledged that the “instability of coalitions generally delays services” but said that this was not unique to NU29.

Next:  Car washers at some shopping malls pay a fee to work