City plans to upgrade hostels in the area soon 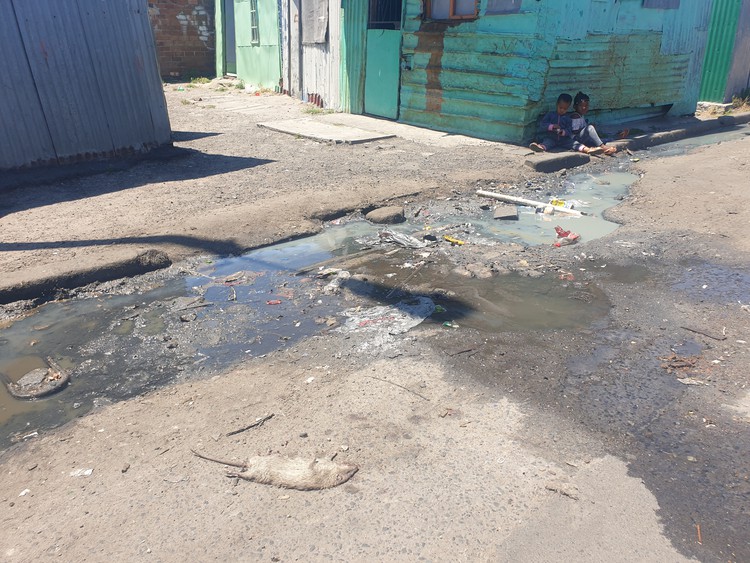 Two young children in Langa play near a dead rat and a puddle from overflowing sewage near their home. The City says plans are in the pipeline to upgrade hostels in the area but asked residents to stop throwing foreign items into the drains. Photo: Mary-Anne Gontsana

The stench of mouldy sewage and large ponds of murky stagnant water are the first things that hit you when entering Zone 23 in Langa, Cape Town.

“Not a day goes by where I don’t have my door open because of the smell,” said resident Khanyisa Xhegwana while she sat on her couch watching her two-year-old and friends playing outside her hostel room.

“Those drains outside have been blocked since 2018. I report, the officials come, they look, they do nothing, then tell me that they will return.

“Sometimes I have to buy a cooldrink to actually get them to do something instead of just looking at the drain and then leaving. But I haven’t seen them since 2018. It’s difficult to even cook because of that smell and the flies,” said Xhegwana.

Xhegwana uses a big brick and a blue wooden board as a makeshift bridge over the pool of water to get to her backyard.

“This is our daily lives in the Zones. The more we try to stand up and do something about it, the more disappointed we get because we get no help from the City of Cape Town, not even from our own ward councillor,” said community leader Fundulwazi Langa.

Walking through streets in Zone 23, we spot a dead rat next to yet another large puddle of dirty water. Just a few metres away, two young children playing next to the water, in front of a green shack.

Langa said that Malusi Booi, Mayco Member for Human Settlements, had visited the Zones and knew about their situation “but all Booi does is give us promises, but he never fulfils them”.

He said “the biggest problem is lack of development. We have people who have been living here for 30 years and more, who are still living in hostels that were made for men to share back in the day.”

Booi said the City has plans to upgrade the hostels and four consultants have already been appointed. They are still working on the designs and other technical aspects of the project which will be presented to the Hostels Forum and various communities for consideration, said Booi. He said the City had begun engaging with the community before lockdown. “The planning and implementation of hostel upgrades is guided by the availability of funding to the City.”

He said that for the next phase of the hostel upgrade, an estimated 660 new apartments, will be built on the Special Quarters and New Flats sites in Langa, costing some R320 million.

Regarding the blocked drains and lack of water in some of the hostels, Mayco Member for water and waste, Xanthea Limberg said in most cases, abuse of the sewer system was the cause of blockages or overflows.

“Teams attending to blockages commonly discover builders’ rubble, nappies, sanitary pads, condoms, and tyres, along with general litter from the system when clearing blockages. These blockages are exacerbated by the disposal of cooking fats into the system, which hardens as it cools and acts like glue for the other materials in the line,” she said.

She said current blockages will be investigated and addressed. Limberg said the intermittent water supply in Langa could be due to a number of reasons, such as a limited allocation for the day or that illegal cross connections were affecting water pressure. “A team will be dispatched to investigate and take remedial action if an infrastructural fault is discovered,” she said.

She also urged residents to report and to play their part in raising awareness of sewer abuse.