“We want to get the attention of this municipality. But if officials don’t address us we will stop all the projects in this ward.” 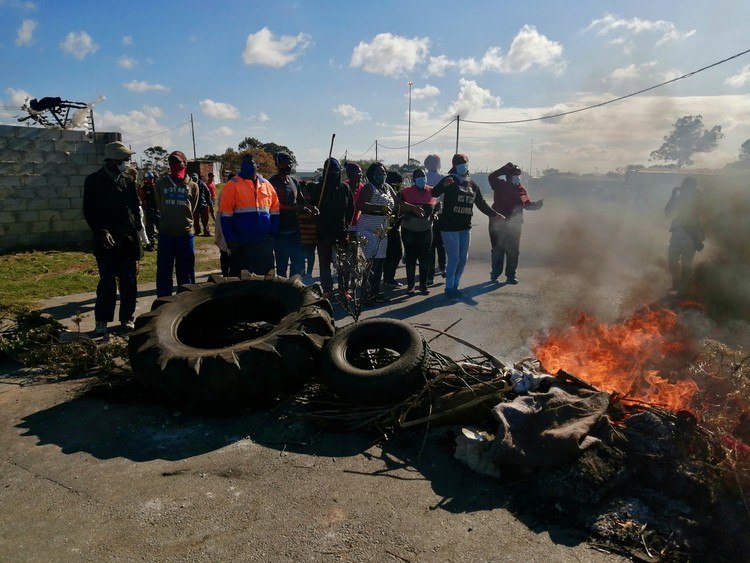 About 150 shack dwellers from Kuyga township in Greebushes, Port Elizabeth, tried to shutdown the area on Wednesday by blocking roads with rubble and burning tyres. The protest was in solidarity with Polar Park shack dwellers after the Nelson Mandela Bay Municipality told them electricity could not be installed.

At 4am, two major roads – Old Cape Road and Mission Road – were blocked by residents. After public order police dispersed them, they moved to Ndzotoyi Street near Kuyga Clinic, stopping traffic from entering the township. Motorists were told they must “donate” money to buy petrol or else be turned away.

By 11am, youths had made petrol bombs and were threatening violence if municipal officials did not come to address them.

Lindile Dyasopu, a community leader, said: “Last year in August our municipality started with electrification of shacks in Kuyga township. They dug holes for the poles here in Polar Park and at our neighbours in Embhuqeni informal settlement. The electric poles were installed in Embhuqeni, but here the officials came back and told us that this land was not suitable for development because our 1,200 shacks were erected near an [Eskom] power line. They closed all the holes.”

“Then we said, we have no problem to be relocated, but the municipality must find us alternative land that has water, toilets and electricity.”

“Since then, this municipality has not found alternative land for us. Both areas that were earmarked for us near Jose Pearson TB Hospital and in Bridgemead were also deemed unsuitable for our shacks. We are 20 years now living in this area, but this municipality failed to find us suitable land,” he said.

He said: “Our main concern is that when the budget for this project was approved, our shacks were included. If we are left out now and go to a place where there is no service it would take long for us to get electricity again.

“We want to get the attention of this municipality. But if the officials don’t want to come and address us we will stop all the projects in this ward,” he said.

Ward 40 Councillor Jason Grobbelaar (DA) said, “I have sent letters and requests since last year November, followed up regularly, and escalated through the mayor’s office. The residents are not getting answers.”

Mamela Ndamase, municipal spokesperson, said, “Kuyga is part of a land grab which is illegal … No one in South Africa has a right to go and grab land. If the community feels its rights were violated, it has a right to approach the court, Human Rights Commission or any other institution.”

“The municipality, through land planning, has embarked on the process of obtaining authorisation of a development around ward 40. There is also a process of acquiring more land for housing. But allocation will be done within the procedures in place,” she said.

Police spokesperson Sandra van Rensburg said the roads are open and police are still in the area monitoring the situation. No arrests were made.

Next:  Lockdown in pictures - Day 126: Trading from home