Broken windows, filthy and broken toilets, terrible stink: the hostels are crumbling and there’s no money to fix them 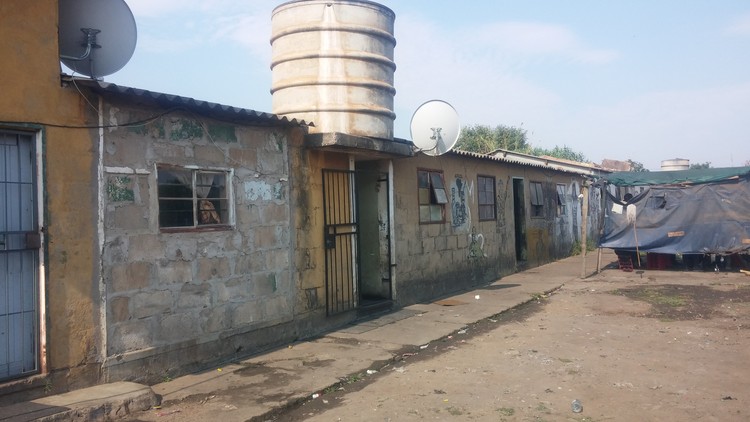 More than 25,000 people live in hostels in Tshwane built by the apartheid government to house single men. Now owned by the City of Tshwane, the hostels are crumbling and residents have lost hope in the government’s promises to fix them.

Broken windows, stinking, filthy and dilapidated toilets are a common feature of the hostels in Saulsville, Mamelodi and Ga-Rankuwa.

Frank Molapo stays in the Saulsville hostel, in Atteridgeville, in which more than 3,000 people live, according to the City. He shares his block with 15 other people. He has lived there for 30 years. At first, he says, the hostels were repaired and repainted from time to time but in more than 25 years the City has never done any repairs.

There are only five toilets, without doors, and with a low wall between them. There is no sanitation or running water. Residents have to pour in water from a bucket. The water must be fetched from the single communal tap in the hostel. There is a heavy stench of urine.

“Everyone staying here uses these filthy toilets,” said Molapo. “Women and children also share with us. And we also share one tap. No one cares about this place. We have tried to get the attention of the City several times but we get empty promises and nothing ever follows, ” said Molapo.

“We stay here because we are poor and have nowhere to go. This environment is inhumane,” said Molapo. 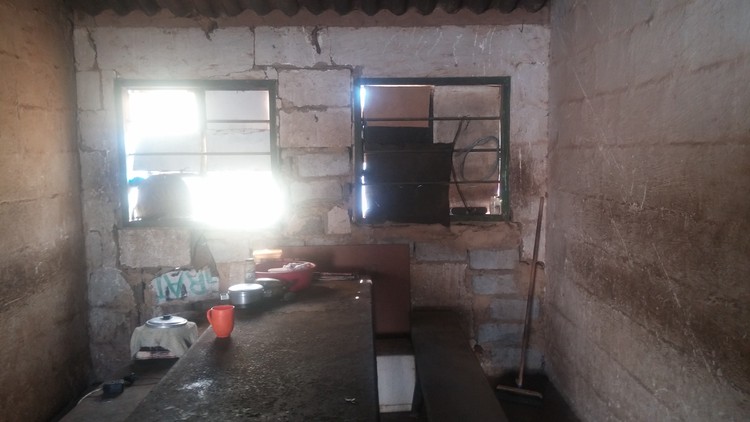 Inside the hostel residents share a dining area with old concrete seats.

Each section of the hostel houses eight people. Residents have closed off small rooms with wood or old curtains. They share a dining area with concrete seats and a table.

Molapo says there is no privacy at all. The hostels are now home to families, not only men.

“Around the 80s the occupants of the hostel used to pay rent. But over the years this was stopped,” said Molapo.

Mmaphuti Moloto moved in in 2017 with her partner after she lost her job and could not pay her rent. She describes conditions as “hell”.

“It’s even degrading to tell people you stay in these hostels, they are filthy and are a health disaster. Sharing toilets with men is so embarrassing to us women,” said Moloto.

She said in the past, local ANC leaders had come to the hostel and promised to change things but nothing had happened.

“We are not safe as women. There are no lights, even in the toilets. Sometimes men walk in while you’re using the toilet.”

City of Tshwane spokesperson Lindela Mashigo told GroundUp that Saulsville hostel had been built by the apartheid government to accommodate migrant workers. He said over the years the hostel had deteriorated due to overcrowding, ageing infrastructure and vandalism.

He said there are 3,130 people staying in the Saulsville Hostel, living in 585 family units. According to the City, just over 26,000 people live in Tshwane’s six hostels in Saulsville, Mamelodi, Ga-Rankuwa and Soshanguve.

When GroundUp visited Mamelodi Hostel, residents, mostly men, were sitting outside. Most rooms have broken windows or no windows at all and residents have used cardboard and plastic to fix them. The walls are dirty and there are holes in the roof. The old steel doors no longer close.

The hostel has no electricity, and this has been the case for the past 20 years according to residents. 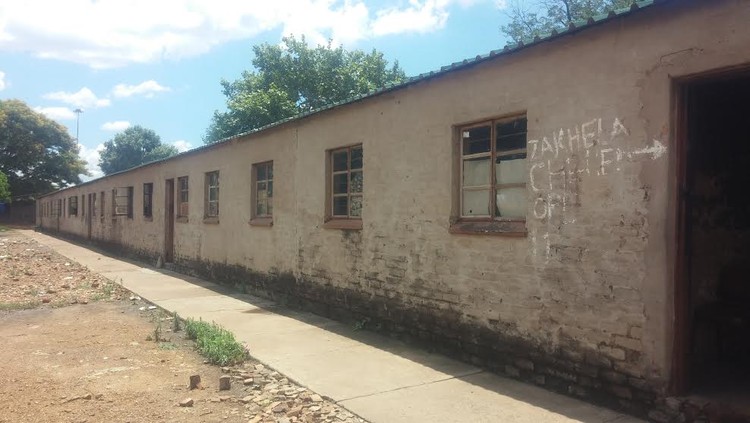 Some of the blocks in the Mamelodi Hostel have no toilets.

“In our block we don’t have a single toilet. We ask from the neighbouring blocks, but they fight us in using their toilets. We share one tap that we created ourselves,” said Sboniso Nzimande from KwaZulu-Natal.

“We survive using candles, and buy paraffin to cook. Life is not easy here. I personally survive with piece jobs, and don’t make much. The struggle of buying paraffin day in and day out is real.”

Nzimande told GroundUp that, since he moved to the hostel years ago, he has seen no improvements.

“We have no ambition to leave these hostels, because we don’t pay rent. Our hope is for a better life. All we are asking for are the basics that our government promises. Just electricity and sanitation.”

“We are living like animals in this hostel and no-one cares. There are big rats here. They have become our room-mates. We burn rubbish ourselves, because there are no refuse removal services from the City of Tshwane. We don’t get any services, for that matter,” said Nzimande.

Edwin Lordwick from Polokwane said he had lived in the hostel since 1988. “I used to work for a construction company in Centurion. The hostel was in a good condition back then and there was electricity. However it deteriorated around the mid-90s.”

“It is like a jungle now. We are forgotten and are living like dogs. Some of us live with kids in this mess. Crime is also a serious problem, ” said Lordwick.

Mashigo told GroundUp that the Mamelodi Hostel, also built for single men, had 30 blocks with 10,958 beds. Each block had a communal kitchen, shower and toilet units. Since 1994, women and children had moved in.

He said there were plans to upgrade hostels in Mamelodi and Saulsville as part of two Urban Development Frameworks. These frameworks still had to be completed and then the City would have to apply to the Gauteng Department of Human Settlements for funding. “The programme will then be rolled out dependant on the funds received.”

Next:  Setback for NUMSA’s insolvent funeral insurer in court battle