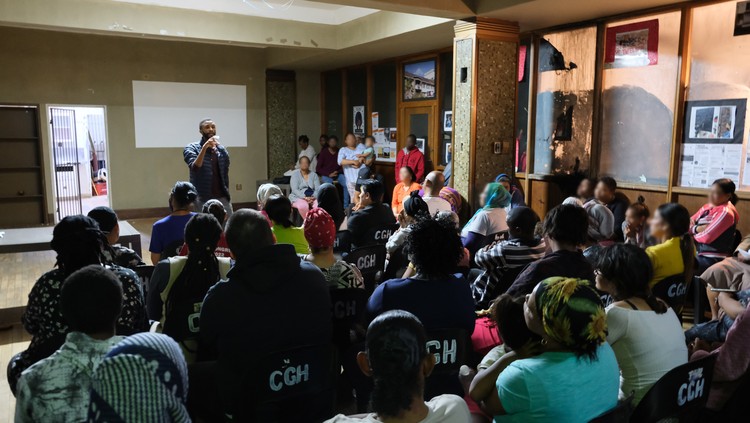 Cissie Gool House residents meet on Monday night after a raid by police on Friday at the occupation. Photos: Daniel Steyn

When Faghmeeda Ling woke at 5am on Friday morning to find that Cissie Gool House was being raided, she told everyone in her corridor to open their doors.

“Last time the police kicked in our doors, but this time we didn’t give them the satisfaction,” she says.

Cissie Gool House is the name given to the former Woodstock Hospital. The hospital, which had been closed for almost two decades, was occupied in 2017 without permission, mainly by people who had been or were facing eviction from their homes in Woodstock due to rising rental costs. The alternative for many of the residents is to live on the streets, or to move to settlements far from the City.

The occupation is part of the Reclaim the City (RTC) movement for affordable housing, supported by activist group Ndifuna Ukwazi.

Jameelah Davids, also a resident, told GroundUp: “JP Smith [Mayoral Committee Member for Safety and Security] must come and engage with us instead of sending his hoodlums – and see that we’re human too.”

The raid was carried out by City of Cape Town law enforcement, metro police, and the South African Police Service (SAPS). This is the second raid this year. A raid in February also led to some arrests.

The City says that the raid was in response to complaints about drugs and firearms at the building.

Karen Hendricks, leader of RTC’s Woodstock Chapter, said that the raid is an attempt by the City to “criminalise” the occupation and use this against them in court. Ling, who is also a leader of the occupation, told GroundUp that while drugs have been traded on the property, this is not condoned. She said there was an incident when a gun was found, but no gun has ever been fired on the property.

According to the City, the building has been “hijacked” by unlawful occupiers and RTC has lost control over the “lawless situation”.

Hendricks says hundreds of officers participated in the raid which lasted three hours. Everyone was searched, she says. More than 1,000 people from 328 families live at Cissie Gool House. 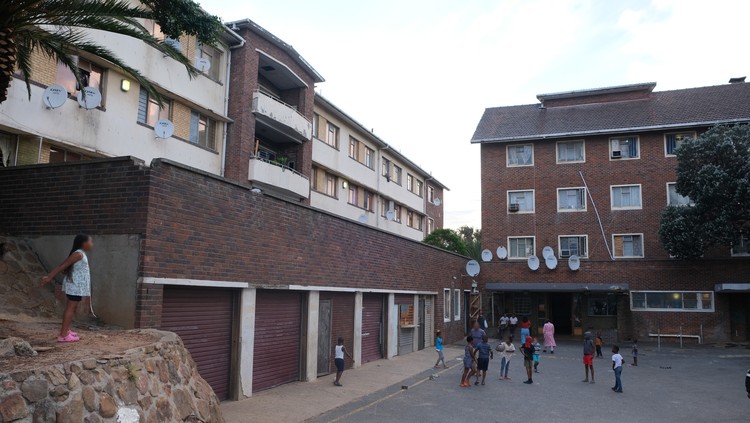 Woodstock Hospital was occupied in 2017 without permission, mainly by people who had been or were facing eviction from their homes in Woodstock due to rising rental costs. The hospital had been closed for decades.

During a house meeting on Monday night, about 150 residents of Cissie Gool House gathered to share their experiences of the raid.

One of the residents claimed that officials conducted cavity searches on minors. A mother said that her 15-year-old daughter was searched while in her underwear by a male police officer and that pictures were taken of her.

Some residents suspected that the raid was conducted to collect data, because the officials were asking questions about whether they paid rent and who they paid. Others accused fellow residents of tipping off the police about people who sell drugs.

No one denied that drugs were found on the premises or that there are residents who sell drugs. The meeting took a resolution to stop drug trading on the property as top priority.

“The social issues that exist at Cissie Gool are found everywhere in working-class communities throughout South Africa,” said Hendricks.

“Social challenges should not be the reason why people cannot access a roof over their heads … We want the City to refrain from this intensity in their conduct,” she said.

At the meeting, residents agreed to enforce house rules and strengthen disciplinary processes to “clean up” the house.

“If people are dealing drugs here, it is very bad for the future of the house,” Buhle Booi, head of political organising at NU, told the residents.

The City wants to evict the residents and develop 700 social housing units on the site. But Cissie Gool House residents are afraid that if they are moved, they will not be coming back.

The 12 arrested immigrants appeared in the Cape Town Magistrate’s Court on Monday after spending the weekend at Woodstock Police Station. All were released with a warning and are to appear in court again in February.

William Siska, from Malawi, was one of those arrested. “Raids are a part of life now,” he said. “I’m used to it.”

He has lived at Cissie Gool House since 2016. He has been unemployed for two years now, doing piecemeal jobs. This was his first arrest. He says that getting the right documents to stay in South Africa will be a challenge.

“Our dignity is being stripped,” said Ling, who grew up in Woodstock. “I can tell you everything about Woodstock. Now they want to throw me out of the city … Why do we have to fight to have a roof over our heads? For heaven’s sake, we’re not asking for mansions.”

Previous:  No school fees? Then no matric dance!