RDP houses not connected to electricity or water for a year

“I have been staying in this RDP house for a year. There is no electricity … I am really struggling,” says Shumani Kharavha.

Kharavha lives in one of 354 RDP houses in Phase 2 of Extension 14, a few kilometres east of Musina, which have never been connected to the electricity or water supplies.

Some residents, including Kharavha, have illegally connected to municipal water.

“I decided to illegally connect water … because after school lessons every day my children used to walk a long distance to fetch water. I could not help them since I am in a wheelchair,” he said.

Kharavha is paralysed from the waist down. He lives alone with his two children, aged nine and 14. He was allocated his house in November 2018.

He survives on a disability grant and cannot afford to buy gas or a paraffin stove. He relies on the good will of people in the community to bring him firewood to cook food. His children make the fire in a wheelbarrow. His 14 -year-old does the family’s laundry. Neighbours and well-wishers bring food when Kharavha’s grant runs out during the month.

Before the RDP house, he had struggled to pay R450 rent in Matswale. “I thought life was going to be easier for me. This is not the case. How can the municipality surely hand me house keys where there is no water and electricity? I thought they were going to fix this as a matter of urgency but up to now nothing has been done.”

At night Kharavha uses his phone to light the bedroom when necessary. His phone is charged during the day at houses that have electricity.

Wilson Dzebu, from Musina Local Municipality communications department, said they were waiting for funds to be transferred from the Department of Energy. “But we expect the installation to be completed by June next year,” said Dzebu.

The Department of Energy had not responded to GroundUp with comment at the time of publication.

Matodzi Ralushai, from Vhembe Municipality communications department, said the municipality has installed about 100 water meters and is waiting for the delivery of the next batch.

John Sibanda, a community leader, said, “The community has taken upon itself to illegally connect water taps because the municipality seems not to care.” 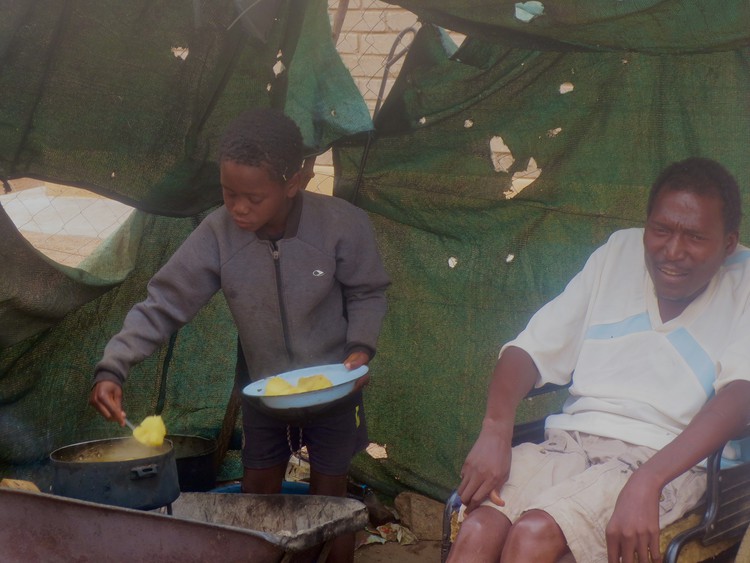 Shumani Kharavha and his nine-year-old son prepare breakfast on a fire in a wheelbarrow. Photo: Bernard Chiguvare

Next:  Prisoner alleging torture at Leeuwkop sticks to his story under cross-examiniation