Picket in support of Stellenbosch workers 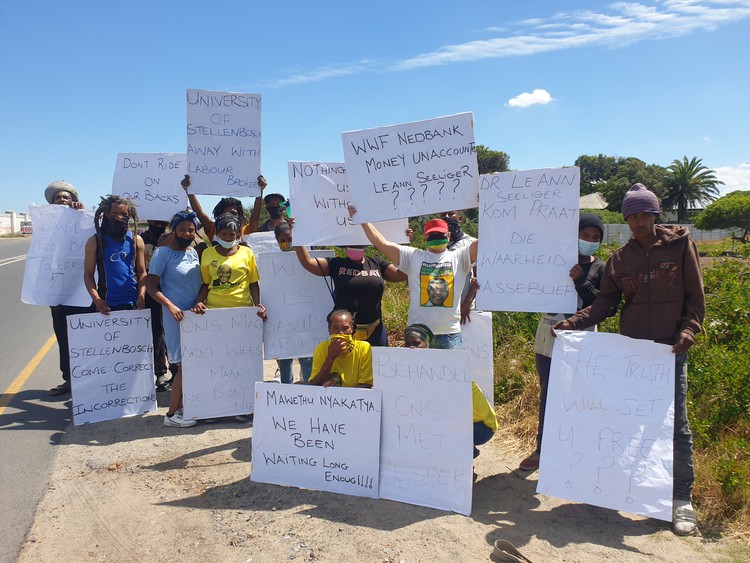 About 20 people picketed on Olieboom Road at the Philippi Horticulture Area on Wednesday. Photo: Mary-Anne Gontsana

A dispute has broken out between a few dozen workers and Stellenbosch University’s Water Institute.

About 20 people picketed on Olieboom Road at the Philippi Horticulture Area (PHA) on Wednesday, in solidarity with the workers. The workers were contracted to clean the PHA. The three-year Restoring the Waterways project aims to reduce pollution to the Cape Flats Aquifer.

But workers accuse the institute of failing to adequately communicate the terms of their employment.

At the picket Ernest Theron of the Strandfontein Social Economic Development Forum said that workers had raised several complaints and were struggling to get answers from the university.

At the centre of the dispute is the work period of the project.

But the university’s Dr Leanne Seeliger said: “The workers’ fixed term contracts ended in June 2021 because a new contract had to be negotiated with the funder who first had to review the progress made by the project before new funding could be accessed.”

She explained that the project received funding from the Water Research Commission, the provincial Department of Agriculture and the WWF Nedbank Green Trust.

She said the Water Research Commission’s budget was R1.3 million and the WWF Nedbank totalled R3.7 million. Both amounts are to be spent over three years and are only paid out “according to the agreed business plans and set deliverables by funders”.

Seeliger said the budget for the work that was done between January and June 2021 was R1 million. “The work on the project was checked and reviewed by the department who found it acceptable. The department then agreed to a second budget of [R1.29m] for another seven months from November 2021 to May 2022. This will also be spent according to an agreed business plan.”

Next:  Call for UCT to urgently divest from fossil fuels

Previous:  Families struggle to rebuild their homes after Khayelitsha fire