Unions are considering an offer by employer association SEIFSA 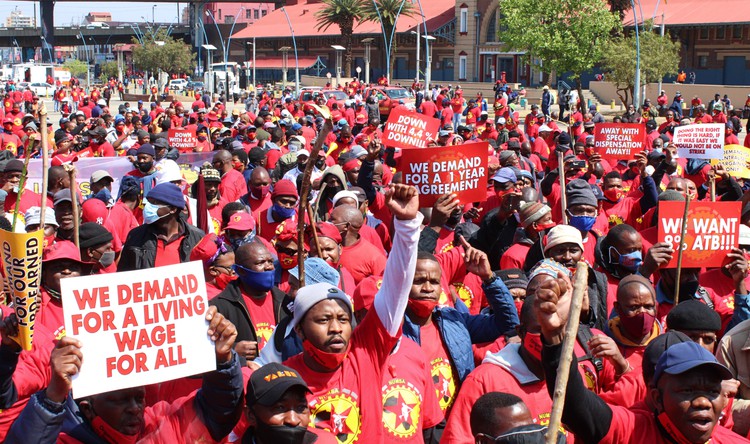 Thousands of National Union of Metalworkers of South Africa members working in the engineering sector gathered at Mary Fitzgerald Square in Johannesburg last week ahead of a strike. Photo: Masego Mafata

Striking workers say at least six people were injured when police fired rubber bullets at workers picketing outside Wireforce in Germiston as part of the National Union of Metal Workers of South Africa (NUMSA) strike on Monday.

Edward Matube, NUMSA Germiston secretary, said about 200 workers marched to Wireforce, a wire producing and supply company, ahead of the picket.

He said when they arrived they called the manager and requested that workers be released to join the strike. While they were waiting, the police arrived, he said.

“We told the police that this was a protected national strike, but they told us there was an interdict which prevented us from being within 150 metres of the Wireforce premises,” said Matube.

Matube said one of the SAPS members began counting down from ten for them to disperse. “We were leaving when they started shooting, so they shot at our backs,” said Matube.

He said they would wait for legal advice from the union’s regional office before laying any charges.

Wireforce declined to comment and GroundUp had not received a response from SAPS at the time of publication.

According to Grace Langa, acting spokesperson for the Independent Police Investigative Directorate (IPID), NUMSA opened a case with IPID after workers were shot at with rubber bullets on 6 October, at a picket outside Diesel Electric in Johannesburg.

There have also been reports of violence by NUMSA members, who allegedly attacked a truck driver last week.

“We will not comment on specific incidents because we want to give SAPS the space to do their investigation. However, we call on all workers who are participating in the pickets as part of the strike to be disciplined and adhere to the picketing rules,” said Phakamile Hlubi-Majola, NUMSA spokesperson.

Meanwhile, NUMSA has presented to its members a proposal from the Steel and Engineering Industries Federation of Southern Africa (SEIFSA).

The union is waiting for consolidated responses from the different regions, said Hlubi-Majola.

“The [current] proposal from SEIFSA is more than the 4.4% that they had put on the table. I am not at liberty to go into the details of the proposal but we are trying to satisfy the interests of both sides,” said Hlubi-Majola.

Hlubi-Majola said she could not yet give a date regarding when the proposal by SEIFSA and the response from union members would be publicised.

Next:  Court dismisses bid to have judge removed in Cape Town eviction case

Previous:  Court ordered Eastern Cape education department to build 65 classrooms in four schools within 90 days, in February 2020. So far, only 17 have been built.