Shop apologises and suspends two employees implicated in the incident 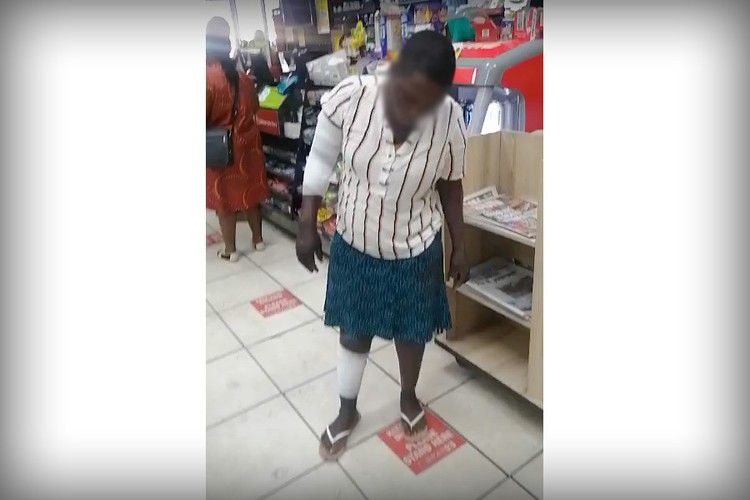 This woman was splashed with methylated spirits and set alight for stealing a packet of meat worth R25. Photo is a screengrab from a video taken by a Musina resident immediately after the attack, on 10 November.

A 40-year-old Zimbabwean woman has been treated for burn wounds in a hospital in Musina in Limpopo after she was doused with methylated spirits by employees at a SuperSpar for stealing food worth R25.

Three people were arrested following the incident and are due back in court in January 2021. The Spar Group said the store is independently owned. The company has, however, apologised.

Mavis* spoke to GroundUp on condition that her identity be withheld. She said she sustained burn wounds on her waist, arm, leg and vagina.

She said she arrived in Musina on 2 November 2020 in search of work. The mother of five said that her husband died in 2012 and she was battling to put food on the table for her young children, two of whom still go to school.

“I was accommodated at a relative’s place but the relative was visiting her husband working in Pretoria.”

She said she had gone days without anything to eat and did not want to burden the landlord who was already caring for her relative’s three young children while she was away.

On 10 November, she said, “out of desperation I walked to Spar and stole a packet of meat worth R25. I walked out without anyone noticing me until some Spar workers approached me, requesting to know what I had bought. I never denied anything. I showed them the meat,” said Mavis.

She said though she explained her situation and apologised, the employees poured spirits onto her skirt and set it alight. “I asked for forgiveness but all fell on deaf ears. Some kicked me. I told them if they wanted to kill me then they should not make me suffer that way,” she said.

According to Mavis some Musina residents came to her rescue and called the police who responded quickly. The residents immediately demanded that the shop be closed. It re-opened the next day.

“I am not denying that I did the wrong thing, but were these workers supposed to give me such a treatment? They have made mine and children’s lives even worse. At the moment I can’t even sit down and I have to sleep on one side.”

“I am not sure when I will recover so I can work for my children. The pain is too much,” said Mavis.

Colonel Moathse Ngoepe from Musina SAPS said three people aged between 27 and 40 were arrested two days after the incident on 12 November 2020. Ngoepe said all three appeared at the Musina Magistrates Court on 13 November and were granted bail of R1,000 each. The case was postponed to 26 January 2021.

In response to questions from GroundUp, the Spar Group said the Musina Spar had confirmed that two staff members were implicated “in what appear to be illegal actions following the apprehension of a shoplifter” on 10 November 2020. The group said they had been “suspended with immediate effect, pending a disciplinary hearing”.

The Spar Group said that the store and its ownership were “shocked and saddened by these events and have offered our sincerest apology and support to the alleged victim, their family and the community.”

Previous:  The woman who tried to stop the rot at the Lottery