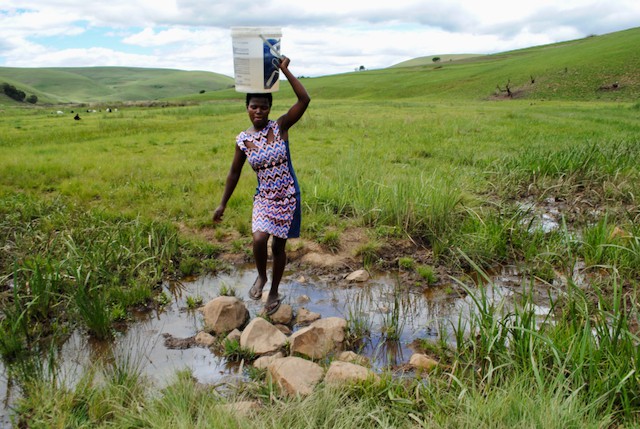 Awonke Moso, 18 and a grade-10 learner at Sithukuthezi Senior Secondary School, says she has been fetching water since she was six. “My day starts at 4am to fetch water to bath and cook porridge for my eight siblings. Then after school I have to also come back and get water to wash my school shirt. I don’t get enough time to study,” she said. Photos: Mkhuseli Sizani

Mbizana, the Eastern Cape hometown of the late struggle icon Winnie Madikizela-Mandela, located in the local municipality named after her, is a hard place for women to live. It has never had tap water. So, from the age of five, girls and elderly women spend hours fetching water from the river from as early as 4am.

The women walk in groups for safety as they must pass through bushy areas to get to the river, a kilometre away from their houses.

They share this water with cattle, horses and donkeys. Some women mix a bit of bleach in the water, they say to kill bacteria.

“I started to fetch the water from that river in 1963, when I was umakoti [a new bride],” says Nomnyaka Nkontsela. “I would go there early in the morning before my in-laws wake up and fetch the water with a 20-litre bucket carrying it on my head. I used to go there more than five times every day. I had to cook, bath, wash my clothes, my children and make coffee for my in-laws.”

She is now 76 and still fetching water.

“But my knees are very sore now, and it takes me hours to get to the river because sometimes I must rest next to the road … I don’t even make my bucket full because I don’t have strength anymore to put it on my head,” she says.

“I am even embarrassed to talk to you because I am wearing dirty clothes,” says Nkontsela. “Sometimes I stay for a week without taking a bath. My two grandchildren are always in a hurry to go to school and they don’t have enough time to go to the river and fetch more water for me.”

“Sometimes I even buy water from the other community members. But I only buy it after I have received my social grant.”

“This is painful because I have been voting for the ANC to give me fresh water and fix our gravel roads,” she says. 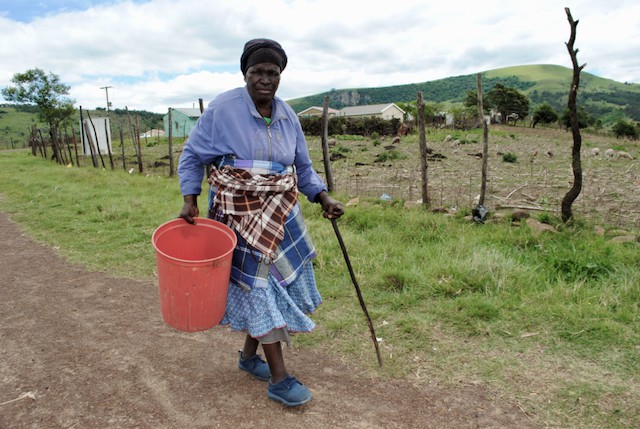 Nomnyaka Nkontsela on her way to the river to fetch water.

“From 7am daily I come here and fetch the water six times a day,” says Somikazi Mpetshwa. With her six-month-old baby strapped to her back she was carrying a 25-litre container of water.

“We go in groups because we are scared of being raped. Even if you can scream for help nobody can hear you because the river is far from the houses,” she says.

Wendy Moso, 29, says she has been fetching water since she was five. “I quit school in grade 9 because coming to the river daily is tiring. I could not cope with my school work … My sister is struggling with her school work. But it’s only me and her who could come to the river in our family,” she said.

“We can’t even grow vegetables because we only get the rain in summer. We eat vegetables only during the payment of social grants when we go to town in Flagstaff, Mbizana or Kokstad. But even then we can’t buy it in bulk because the Quqa (bakkies) and taxi drivers charge us between R20 and R30 a bag.”

“A taxi drops us on the main tarred road in Emagusheni. To get to our village we have to take a Quqa and again pay for our bags the same amount.”

The reason for this she says is because the roads are so bad the taxi drivers say they risk their vehicles. 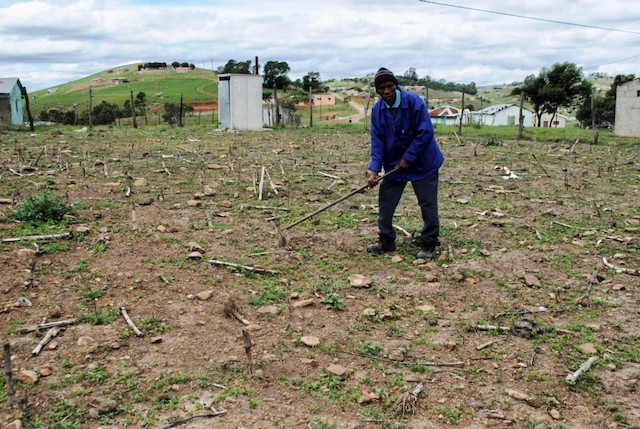 Luvuyo Maboza has a family of nine and has started to prepare his vegetable garden in time for the summer rains. “My garden is as dry as a desert, because I could not plant since the last summer,” he says.

Luvuyo Maboza, chairperson of the steering committee for an RDP housing project in Mbimba village, said, “From the first local government elections [in 1995], we were promised water. Then in 2004, municipal officials came and drilled a borehole and promised that we will get water. But we never received water.”

The municipality isn’t aware of the borehole but promised to investigate its existence.

“Our gravel road was never been maintained, ever since it was built in 2001. Emergency services like police and ambulance can’t reach our area when it’s wet because our roads are impassable … if there is a sick person or a corpse or a woman giving birth, we use an ox cart to take the person to the tarred road. Ward councillors just come and go, without helping us,” he said.

Gcobani Mahlasela of the Bizana Taxi Owners Association said, “We do charge our passengers for 10kg, for both food and vegetables … However, the prices you have mentioned to me [R20–R30] are abnormal and that is a crime. We would like to advise our passengers to take the registration numbers of those taxis and bakkies and report them to our offices. We will take action against the perpetrators.”

He said the passengers should not be punished for poor roads.

“All the district roads are gravel roads and are severely affecting our business. We always repair our brand new quantum taxis because of these gravel roads … Some of the roads are being fixed but not as quickly as we would like” he said. 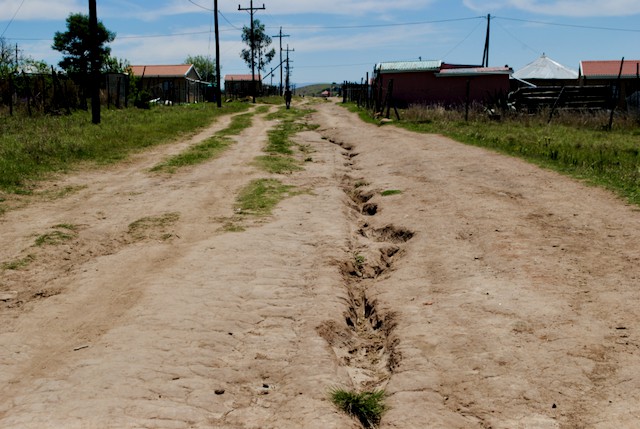 Ward 3 Councillor Busisiwe Luwele (ANC), elected in 2016, said only two of the nine villages in her ward have running water.

She said the ongoing Bonda RDP housing project with 1,000 units started in 2013 but couldn’t be completed because of the bad roads. All the finished houses have Jojo tanks for rainwater.”

“This municipality has 31 wards. All of them have a road crisis. Only one road out of two that I have asked to be fixed during my first term has been done,” she said.

The district municipality and the Department of Water built the Ludeke Dam and is busy with reticulation to villages, but it is dependent on bulk infrastructure grants. 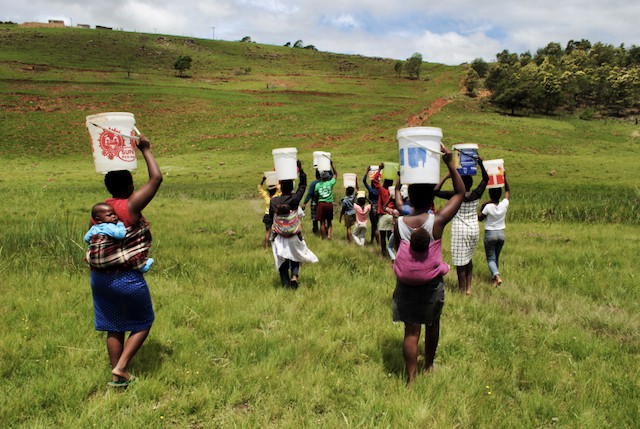 Mbiba women go in groups to fetch water for their safety

Next:  Some people are just warm bodies occupying our offices and I don’t need them, says health MEC