Mfuleni shack-dwellers have been using an open field as a toilet. Now even the field is too dirty

Communal toilets in Burundi informal settlement in Mfuleni have been blocked since January because a problem with innoculations has prevented the City of Cape Town from employing janitors to clean them. Residents are using an open field.

Thabo Khuphiso, 31, says he walks into the bushes when he needs to use the toilet.

Three months ago, he says, armed men attacked a friend who was relieving himself on the land.

“My friend was still squatting on the field when the thugs pointed a gun at him and demanded his cell phone, shoes and money.”

Some people use buckets which they empty behind other people’s shacks, Khupiso says. 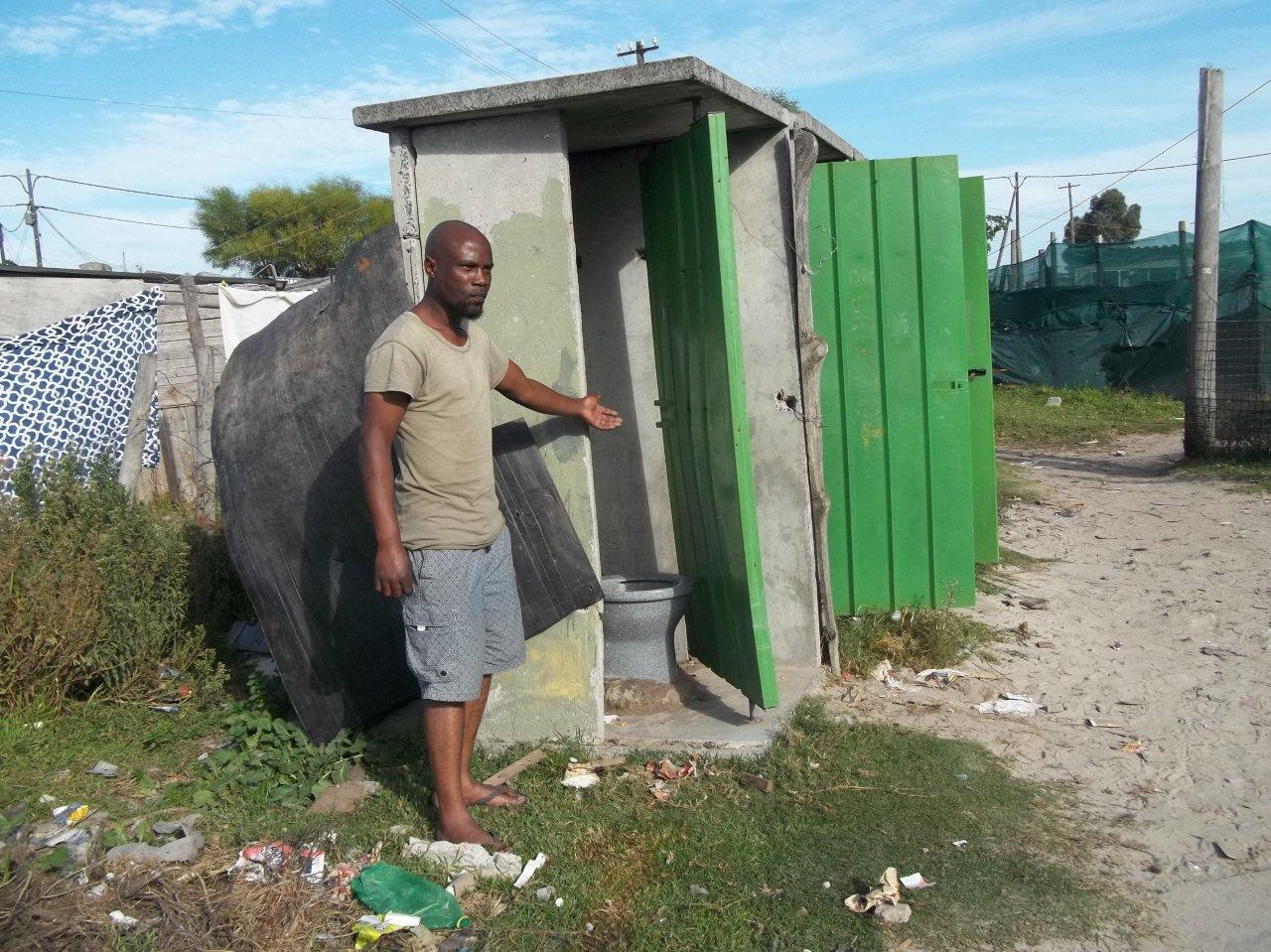 Thabo Khuphiso says he uses the field nearby because the toilets are too dirty to use. Photo: Vincent Lali

In a block of toilets located in Khuphiso’s area, one toilet is damaged but relatively tidy and usable. The others are filthy.

The toilet was damaged when the driver of a vehicle drove into it in December last year.

Letsama says shack-dwellers stand in long queues to relieve themselves in the only usable toilet.

“When residents and school kids are about to go to work and school in the morning, you find a queue outside the toilet. The same happens in the evenings after they return from work and school,” she says.

Letsama says she last saw City of Cape Town janitors in her area about three months ago.

“No one cleans these toilets. I used to use a hosepipe to pour water on toilet bowls and toilet floors to clean them. I stopped because I could not cope with the dirt.”

She has told her children to use a bucket when the queue outside the toilet is too long. She empties the bucket later.

For safety reasons, she has also told them not to use the vacant field as a toilet.

Thobile Nolevu, 55, says he watches over his five children when they use the toilet. He does not want them to use the vacant land.

He says flies from the dirty toilets invade his shack and when the wind blows in the wrong direction the stench is overpowering.

Nomathamsanqa Myoyo, 33, says even the vacant land is now too dirty to use because so many people use it as a toilet. When she is alone in her shack she uses a bucket which she empties at an illegal tip nearby. She tries to use toilets in shopping malls whenever she can. 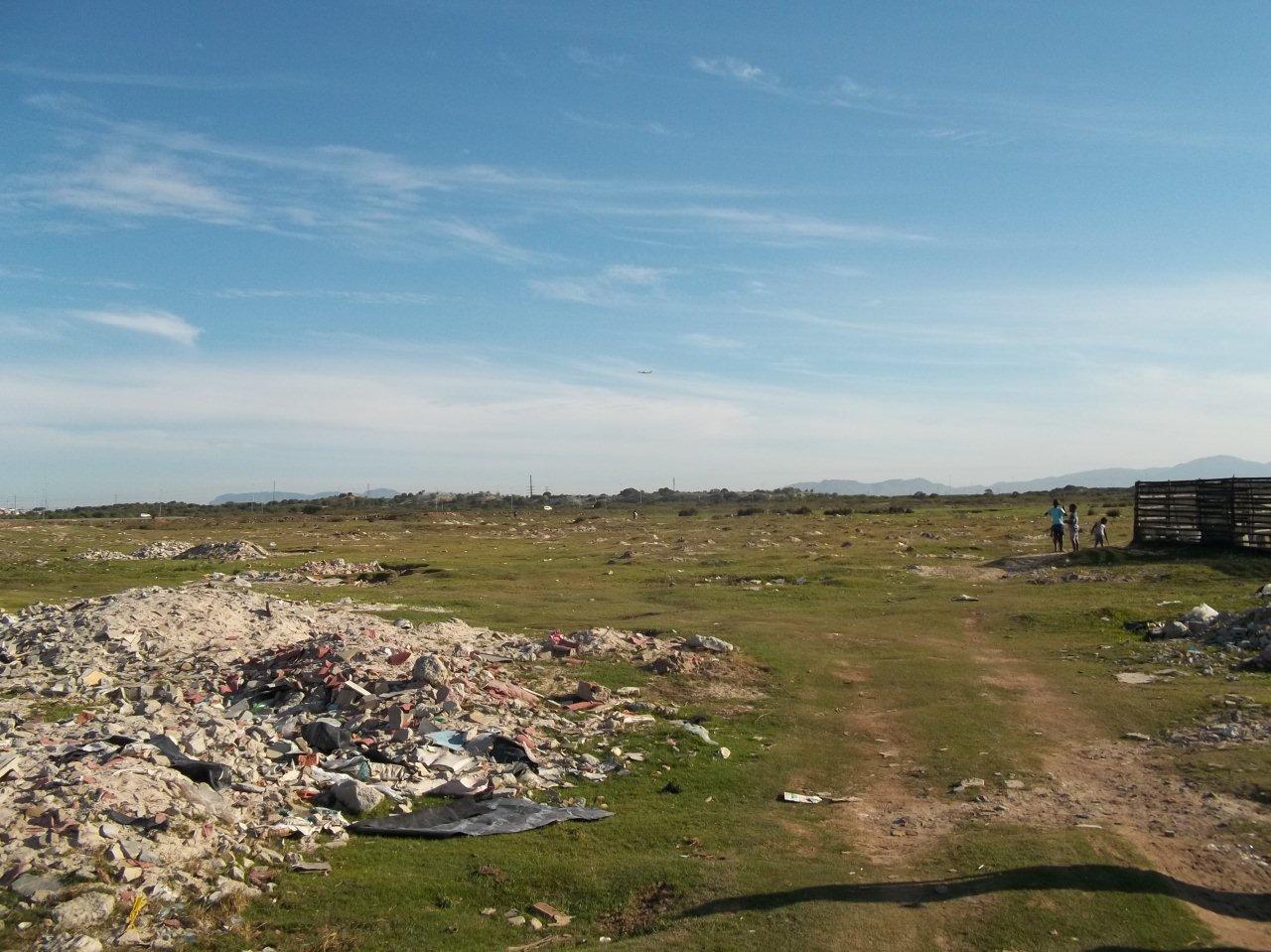 Residents of Burundi informal settlement have been using an open field as a toilet. Now even that is too dirty for some to use. Photo: Vincent Lali

Acting Mayoral committee member for Informal Settlements; Water and Waste Services and Energy, Councillor Stuart Diamond, said the contracts of the janitorial staff working in the area had expired in January this year.

The City had not been able to employ new janitors on board “due to an issue with the supplier of innoculations,” he said. Janitors are innoculated to protect them from illness.

Stuart said the City planned to bring back the previous janitors “so the service can resume as soon as possible”, but needed the go-ahead from the community and the ward councillor.

“With regard to the recruitment of new janitorial staff, that would be dependent on the availability of the vaccinations required,” Stuart said.

Ward councillor Themba Honono said the City had not yet approached him about re-hiring former janitors in Burundi.

Mayoral Committee Member for Corporate Services, Councillor Raelene Arendse, said the tender with the previous supplier of innoculations had been terminated and a new process had been launched but approval for a budget over-run had to be sought.

“The City expects that the matter will be resolved within the next few weeks,” she said.