“We begged them not to take our belongings” 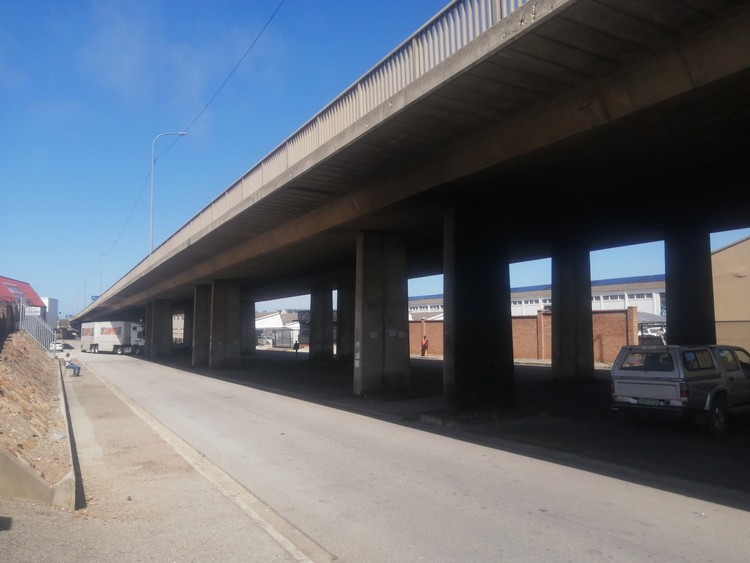 Nelson Mandela Bay Municipality has prevented about 30 people from living under Grahamstown Bridge. Some of those chased away say they had lived there for many years as it is ideal for collecting recycling material and also close to piecemeal job opportunities. Photo: Mkhuseli Sizani

About 30 people, some of whom say they have lived for many years under the Grahamstown Bridge in North End, Gqeberha, have been removed by the Nelson Mandela Bay Municipality. Security guards have since been posted at the bridge, day and night, to prevent people from returning.

Luphumlo Klaas, known as Cool J, told GroundUp, “We were given notice on 24 October by a social worker. She told us that we must leave the place because the nearby companies were complaining about us that we were making the bridge filthy.”

He said the social worker said they would get alternative accommodation and food.

On 25 October, GroundUp published a story about Gqeberha’s recyclers and homeless communities, including the Grahamstown Bridge community.

On 28 October, police, metro police and municipal security guards demolished their tents and took away their blankets and mattresses.

“They showed no mercy to us, although we begged them not to take our belongings,” said Klaas. “They only left us with the clothes that we were wearing. Since then, most of us have been scattered all over the area looking for a place to sleep.”

Nkosomzi Meva said he has been living under the bridge for 18 years. He said they had been evicted before, but previously no security guards had been posted.

Sibabalwe Lumko said he has been living at the bridge for ten years because there was access to recycling materials. He was making R100 a day.

He said some of them are now sleeping without blankets in tall grass near the railway line. “We wake up and our clothes are wet because of the dew,” he said.

“The shelter in Korsten is too far and we cannot afford to pay R30 a day [for the shelter fee],” he said.

Mamela Ndamase, municipal spokesperson, said, “It was not an eviction.” She said the land invasion unit had removed “illegal” structures on pavements and under the bridge, saying they were “an obstruction for motorists and the surrounding businesses as they were unable to access their premises”.

She said each person had been interviewed and offered transport to various homeless shelters. She said they had refused the offer.

“Unfortunately, this is their right and freedom of choice. We cannot force them into staying at shelters,” she said.

Next:  Mother makes over 200 calls to Post Offices in desperate bid to get her social grant