“We are the rightful owners of these houses” say occupiers 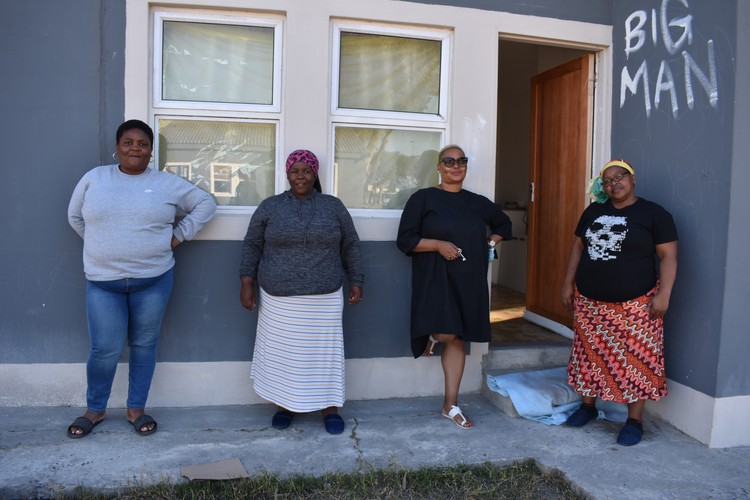 From left: Lindiwe Sibhozo, Thembisa Apile, Julia Ngxuluma and Sylvia Wana say they are beneficiaries of the City of Cape Town’s housing project in Nyanga and moved into the houses recently to prevent further vandalism. Photo: Buziwe Nocuze

More than 20 beneficiaries of the Mau Mau housing project in Nyanga have occupied their houses without the City of Cape Town’s approval. They occupied the houses on Saturday, 18 July.

“We were tired of watching our houses being vandalised by criminals. Coming here without the City’s approval is not about undermining them but to protect our houses”, said Lindiwe Sibhozo.

The houses, some still incomplete, are now in poor condition. The occupants claim that they are saving the City a lot of money.

In June, GroundUp reported that beneficiaries of newly built Breaking New Ground houses were unhappy with how the City had been managing the project.

Thembisa Apile, 43, told GroundUp that they did not want to continue staying in shacks while they had houses. “We are the rightful owners of these houses. A further delay in occupying the houses would be disastrous.”

Julia Ngxuluma said she had been using her own money to fix the house. “We are the caretakers of our houses. All we are waiting for now is the City to come and do verification,” said Ngxuluma.

The City’s Mayoral Committee Member for Human Settlements, Malusi Booi,said the illegal occupation of complete and incomplete units at its Mau Mau housing development “jeopardised the allocation of houses to the rightful beneficiaries, who are mostly elderly, and it is unacceptable”.

Construction of the 432 state-subsidised houses started in 2018 and was expected to be completed by February 2019. In June, Booi said the handover of 14 units had been delayed due to the vandalism of plumbing, electricity, and windows.

According to Booi, 19 units were occupied recently “by what appears to be younger beneficiaries” of this project. He said this was at the expense of older beneficiaries who should be first in the line to receive houses.

“The younger beneficiaries appear lower down on the project list. They would only receive their houses later in the project, but they are now pushing down the elderly beneficiaries so they can benefit first,” said Booi.

Next:  COSAS shuts down schools in Alexandra