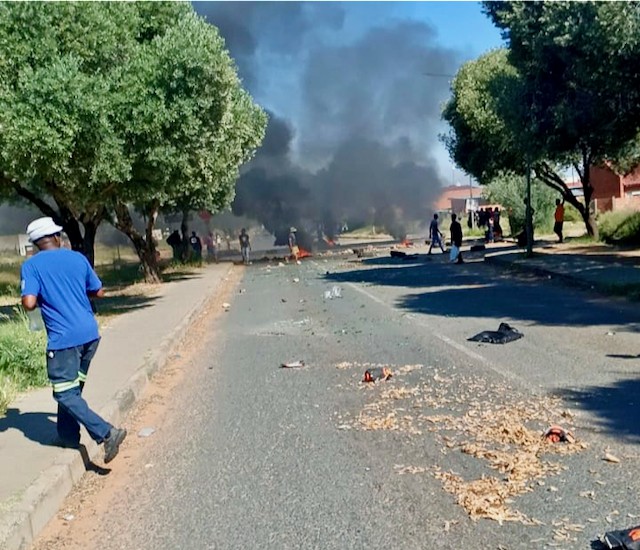 Residents in Kimberley have been complaining about the lack of service delivery by the Sol Plaatje Municipality. This was the second protest this week. Photo: Theo Kantane

About 500 residents from Phomolong in Galeshewe, Kimberley, protested on Wednesday morning, blocking the R31 and other roads. The protest was widespread.

Phomolong resident, KG Selebogo, said the Wednesday protest was over the lack of a response from Head of Housing Development at the Sol Plaatje Municipality, Tebogo Bonokwane.

“The municipality should have consequence management, where people who are not doing their jobs must vacate,” said Selebogo.

Bongiwe Mdlolo said, “We don’t have taps. We have to walk about 500 metres to fetch water and we don’t have toilets. We are still using the bucket system.”

Residents want their shacks in Phomolong registered, and water and toilets supplied to the settlement. They also want electricity.

“We are using prepaid electricity, but all of a sudden, two weeks ago, our electricity was blocked. We had to pay – some had to pay R50 and others had to pay R80 to unblock it,” said Selebogo. She said that no explanation was given.

According to Soné Openshaw, the accountant in the customer care division of the Sol Plaatje municipality, the fee that residents had to pay was to open an account with the municipality. Through this account, residents would pay for services delivered to informal housing, she said.

“When the residents first moved to Phomolong extension, they received a three-digit Erf number. This has since changed to a five-digit Erf number. Now the residents have to come to Sol Plaatje municipality with a letter stating that they are the owners of the property. We then open an account for them, to be billed for informal housing,” said Openshaw.

“The R80 that they pay when they open their accounts will remain in the account and will be returned to the residents when they move from that property,” said Openshaw.

Sol Plaatje Mayor Patrick Mabilo arrived at the protest with other members of the municipality, including Boy Dhluwayo, the municipal manager.

Residents handed them a court verdict from 2012, which they say had instructed the municipality to provide the residents with serviced land.

Mabilo encouraged the residents to organize a task team that will liaise with the municipality on the issues raised by the community of Phomolong.

Residents said that they were giving the municipality two weeks to respond to their queries, otherwise they would intensify their protest action.

Municipal spokesperson Sello Matsie, (who also spoke on behalf of Bonokwane) said, “Last week, there were discussions around the issues the community raised when they met with the officials from Sol Plaatje, but no memorandum was handed over.”

“The campaign to block electricity is the only way that we can force people to come and pay.”

Some of the services that people residing in informal housing pay for include refuse collection, he said.

“We have been engaging with the community. We have received concerns from the public. All this will also form part of our comprehensive response towards the community within the two weeks they have given us to respond,” said Matsie.

Next:  Principal removed after parents accuse him of misconduct

Previous:  PRASA’s new boss too old to take up the role