How Walter the storyteller escaped homelessness 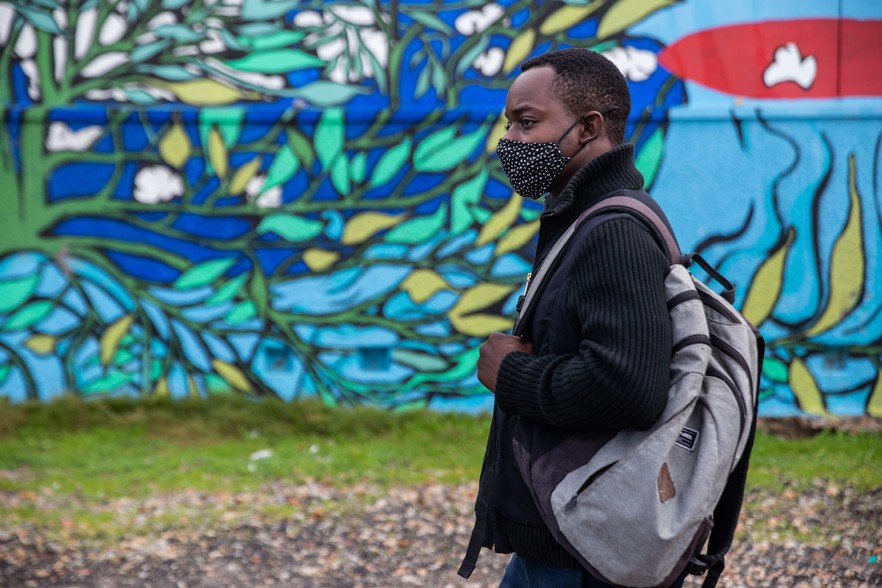 When the Covid-19 pandemic hit South Africa last year, Walter Nyamugama, pictured here in Muizenberg in August 2021, soon found himself living in a tent in a park with other homeless people. Photo: Ashraf Hendricks

Walter Nyamugama used to live in a tent. Now, he lives in a shared house, spacious and with a beautiful view of the Muizenberg promenade.

“Sometimes I’m sitting here and I can’t believe it,” he says, seated in a bright, upstairs common room.

Nyamugama is 28. He is from Mutare, Zimbabwe, and has lived and worked in South Africa since his early 20s. He recently returned from Uganda, where he was part of a training programme run by Youth With A Mission (YWAM), a Christian teaching institution.

In September, he will begin a media studies course run by YWAM. While he waits for the course to begin, he is doing ad-hoc work gardening for friends and looking for call-centre work to pay for his board and tuition.

GroundUp first spoke to Nyamugama 16 months ago, when he was living in a tent in Van Riebeeck Park in Vredehoek, Cape Town. He served as a liaison between local residents and a large group of homeless people, many of them forced out of their lodgings when the pandemic hit South Africa.

When the country entered the level 5 lockdown in March 2020, Nyamugama was living in a backpackers’ lodge in the city centre. He was a hotel worker supplementing his income by buying and selling tourist art in Church Street. He did not earn a lot, but life was steady.

With the lockdown, the lodge asked people to pay three weeks’ rent upfront, instead of paying as usual on a daily or weekly basis. This was beyond his means.

With nowhere to go and no money, he approached shelters, but they said they were full and he was turned away. His only choice was to pitch camp in the park, together with other people made homeless by the pandemic. They included traders from Greenmarket Square, UberEats drivers, waiters, barmen, and hotel workers. Many were immigrants.

It was a shock for him.

“People don’t know the stories or struggles, and think there is a choice,” said Nyamugama. “Most homeless work transactionally. All the help comes in the form of food and some clothes. This way makes homeless people not trust organisations. We must give homeless people a purpose.” 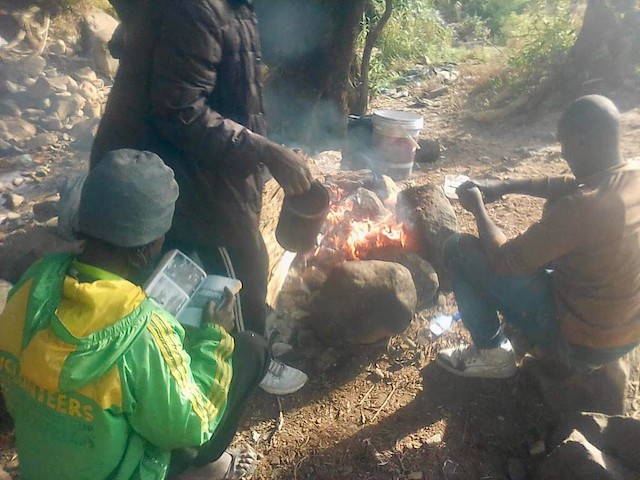 Local homeowners and residents complained about the encampment. GroundUp reported at the time that law enforcement persistently harassed them.

But Nyamugama says that after GroundUp published the story, people in the Gardens Community Action Network (CAN) approached him with offers of assistance.

Gardens CAN helped secure food donations, delivered on Tuesdays and Thursdays. The group would cook together and distribute the food themselves.

According to a member of the Gardens CAN, Nyamugama turned down offers of shelter meant for him alone. “He could have easily found a way out, but he fought for [all] 40 people in the park.”

When finding space for all 40 became unfeasible, he fought for 20, said the CAN member.

Gardens CAN and Nyamugama managed to secure three-months winter shelter for 20 people in a local backpackers. An online pub quiz, hosted by Jon Keevy, raised half of the funds for the shelter, and the other half came from the Haven Night Shelter.

Shortly before they moved, a man living in the park was murdered in June 2020.

But life in the lodge was not harmonious. When the group was rowdy, Nyamugama bore the brunt of complaints. When other homeless people came to the lodge seeking a place, he had to explain to them why they could not stay.

“There was a time when I was living in the lodge and I couldn’t go outside. A rumour got around that I was giving money away,” he says.

That he had secured accommodation for the group and that he easily interacted with wealthier people and the group’s patrons, fuelled rumours. Nyamugama became known as the guy with money. Two phones, which he had been using to receive e-Wallet payments, vanished.

As lockdown regulations eased, about half of the group found work and also more permanent shelter. This would have been unlikely had they still been living in the park.

Nyamugama moved to a lodge in Commercial Street, with six of the original 20. Here he arranged for them to do repairs and renovations at the nearby shelter for homeless LGBT people. It was voluntary work to show the skills and good faith of the group. But soon his peers began to ask for payment and he was the man with the funds for the materials.

Once again, he was caught in the middle. Nyamugama approached the shelter to ask if they could get paid but was told they could not afford to. The work stopped. The group turned on him.

“People were angry with me because they were expecting that I was going to find more money. Some even threatened people who were helping out. In their mind, I was given millions,” he says.

Meanwhile, he had begun to pick up shifts at a local restaurant.

He and a friend were offered digs owned by a church in town. The pastor was involved in a CAN. His roommates were now church people. But he felt stigmatised for having been homeless. If meat went missing from the fridge, he was immediately suspected. Then a laptop belonging to the church went missing.

People who had been working in CANs say Nyamugama one day simply disappeared.

Nyamugama says he didn’t want to continue working in the hospitality industry. He wanted to be a storyteller.

He heard about a training programme in Claremont, run by NGO U-Turn, tailored for homeless people. He found a bed for two weeks, waiting for the programme to begin. But then he ran out of money. For a week he slept on the street outside the programme office.

He became friends with one of the programme administrators, Katlyn Sebatsane. One day she said he didn’t seem to be someone addicted to drugs. Nonplussed, he replied that he was not. She explained to him that the programme was for people with severe substance dependencies, and much of the time is spent in a detoxification programme.

Sebatsane introduced him to her husband, Phineas. The couple assist U-Turn, but also run their own project, Rea Thusana, for homeless women in Muizenberg. They found a bed for him in a lodge near the railway station in Observatory. He attended programmes and volunteered in the kitchen, cooking for his board.

Phineas Sebatsane also worked at the YWAM Media Village, a training school based in Muizenberg for theological and media studies. He encouraged Nyamugama to apply for a six-month programme.

In February 2021, Walter moved to Muizenberg into digs owned by YWAM, along with other young people from around the world. Nearly all his classmates came from circumstances more privileged than his own.

“Most had never really known a homeless person before. The first days were tough because there was still that stigma,” he says.

Three months of “discipleship training” in Muizenberg followed. Nyamugama began sharing his story with his fellow students. He also met his girlfriend, an American friend of Katlyn.

After three months, the class was set to decamp to Uganda for three months’ further training. Such a trip was well beyond his means. But his story had connected with people, and he was able to secure enough funds to cover his trip, on the very day the group was set to fly out.

He says the Uganda trip was a highlight in his life; something inconceivable just a year before. He visited the source of the Nile. He travelled to a vast refugee camp on the border of South Sudan.

“It put my life in perspective. You just hear AK-47s going off all the time,” he says.

While he waits for the September media studies intake, he spends much time with the Sebatsanes, helping them in their work with homeless people, and volunteers time at the U-Turn Service Centre in Muizenberg. He still has to keep finding ways to pay for his studies and his bed.

He is certainly well-stocked with stories to tell.

“I want to talk to people and tell their stories. It’s what I want to do for the rest of my life,” he says.

Next:  Families want electricity bills from lockdown to be scrapped

Previous:  Many sex workers are battling to get vaccinated