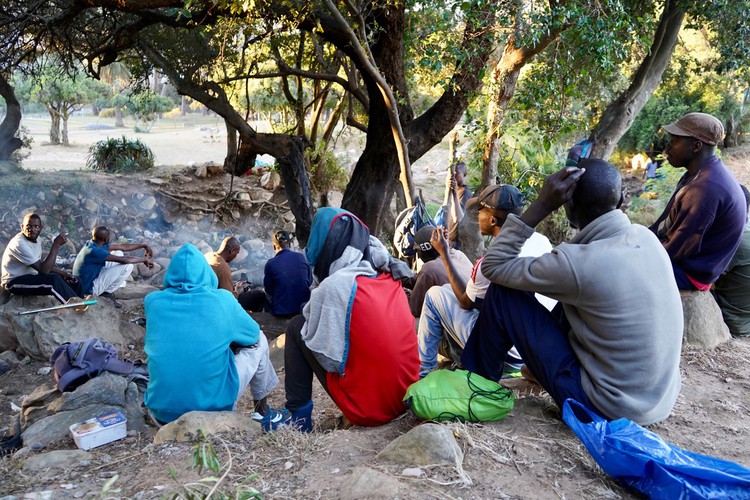 A group of homeless people who had been living in Cape Town’s Van Riebeeck Park are now staying in a backpackers’ lodge. Archive photo: Tim Wege

Twenty people who have been living in Van Riebeeck Park in Vredehoek now have accommodation for the winter months in a Cape Town backpackers’ lodge.

In April, GroundUp reported on the group of people living in the park, most of whom are not South African citizens, who had regular encounters since lockdown with police. Later in the same month, we reported that members of this group claimed they were picked up by authorities and left without their possessions in Goodwood.

Walter Nyamugama, originally from Zimbabwe, said that a group of 20 people had been living in the lodge since 3 June. Nyamugama said that he had approached the local Community Action Networks (CANs) to help secure shelter for the winter months. The CANs have been raising funds for the group, and securing donations of food and clothing.

Nyamugama said that he and other members of the group had been living in lodges similar to this before the lockdown, but they lost their income when informal trade dried up, and then also lost their accommodation. Non-South African citizens may not receive government Covid-19 support such as food parcels.

Nyamugama says that once he had found a lodge that was willing to house members of the group, the CANs and Holy Trinity Church in Gardens approached the Haven Night Shelter, which paid the group’s security deposit. Nyamugama said that members of the group living in the lodge would be contributing to covering the costs of accommodation by selling wire sculptures and bracelets.

The City Bowl CANs banded together to organise an online pub quiz on Monday 8 June, hosted by Jon Keevy, to raise money to cover the rent for the group, with local businesses and residents contributing prizes. The funds raised cover 50% of the accommodation costs as budgeted for 3 months, and will be will be administered by The Haven.

Nyamugama said that he was “happy, excited, and confused”. He said that securing accommodation for 20 people was bittersweet, as there are still more people living in the park.

“It’s not easy, as not everyone can stay in the lodge. There’s a new challenge because 27 people still live at the park,” said Nyamugama.

Holy Trinity Church has been acting as a drop-off point for food donations for the group, as well as providing a place for the people living in the park to meet, charge their phones, and access the internet. The church will continue to serve those living in the lodge and those remaining in the park. According to a 2 June blogpost on the CBD CAN website by Miki Redelinghuys, Ladles of Love will be providing a daily meal to the group.

Previous:  Two years waiting for the lights to be switched on