From early morning until late at night, men carry huge bags filled with plastic to be weighed at Michael Khumalo’s recycling centre in Vrygrond. Khumalo says he employs about 20 residents to pack, weigh and load the materials gathered by the community. Women pack, while men weigh and load the bags onto trucks for Khumalo.

People collect mostly plastic bottles and bags at a nearby landfill site in Muizenberg. He says just over 100 people exchange recyclables for money at his centre every day. They get R2 a kilogram from Khumalo.

Susan Thomas has been working for Khumalo since 2012 after struggling to get a job for many years. “Now I do not have to depend on my son’s disability grant. I have an income of my own to support my family … I no longer go door to door to people’s houses [looking for work],” said Thomas.

“I sort and pack six bags a day,” she said. One of her four children collects scrap at the landfill site. Her husband gets piece work in construction or gardening.

But Khumalo’s business is in the midst of a court case with the City of Cape Town and a land dispute. His business and a pig farm are located on a section of land which has become the focus of a recent land occupation.

On 17 April, GroundUp reported on the protests in Vrygrond, when residents demanded to occupy Xakabantua, a piece of land they said had stood vacant for too long. 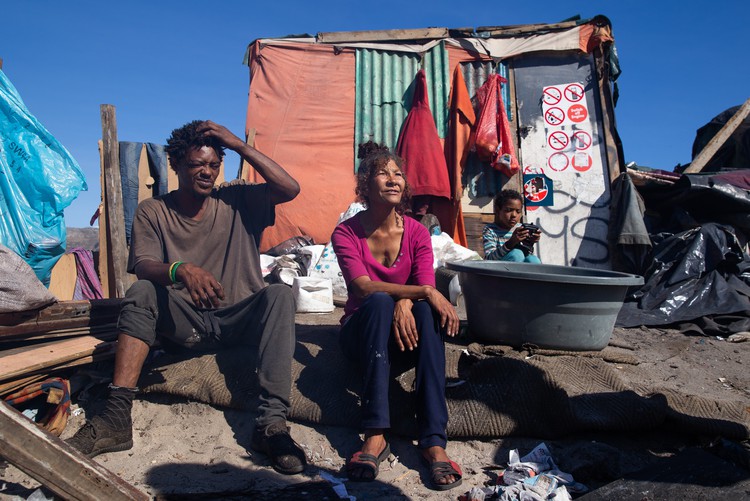 Morrien Williams and Joseph Slabs say they moved from their home in Lavender Hill to Vrygrond because of gangsterism. Slabs collects recyclables at the Muizenberg landfill site and makes about R200 a week. Photo: Ashraf Hendricks

“The City is saying my business is illegal even though it is registered and I have been for years applying for a licence to operate and they are not granting it,” said Khumalo. He said he built the recycling centre in 2011.

The City said Khumalo had not ensured that waste could not be blown away; had not registered with the City for accreditation as a recycling business; was dealing with the waste in a manner that causes dust spillage and litter; and kept rubbish that could be a health hazard.

In 2016, the City told him to cease all activities, conduct a clean-up of the land and vacate the site.

Khumalo said he is not the reason the area has become a dumping ground. “This can be clean in the afternoon, but in the morning it’s back to being dirty because people are throwing their rubbish here,” said Khumalo. He said the City provided one bin per yard, but “here in one yard you can find 20 households”. Trucks also pull up and offload building rubble.

Khumalo will appear again in the Simon’s Town Magistrate’s Court on 15 May. The City said it “will comment once this case has been concluded in court”.

Next:  City of Cape Town clamps down on illegal extensions to houses

A message for police and soldiers: We support what you’re doing but do it gently