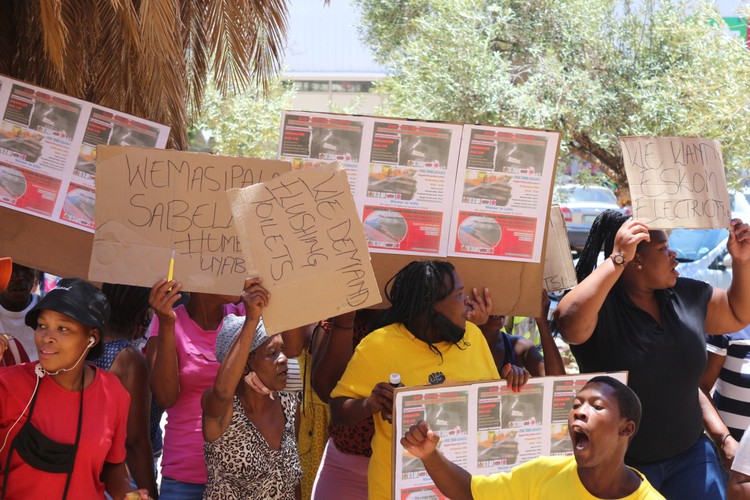 Members of the United Front for Service Delivery marched in Upington on 26 November. Photo: Selby Nomnganga

About 40 residents marched in Upington last week under the banner of the United Front for Service Delivery demanding electricity, flush toilets and water.

They also called for a basic income grant.

The United Front includes the C19 Peoples’ Coalition, SANCO Paballelo branch and the Upington Ratepayers Association. Speakers from both the local Dawid Kruiper municipality and the district ZF Mgcawu municipality and an official from the South African Social Security Agency (SASSA) stood on the ramp leading to the main entrance into the municipal building.

Protesters complained that electricity charges levied by the Dawid Kruiper municipality were too high.

Protester Axolise Busakwe, who is unemployed, said she wanted to buy electricity directly from Eskom instead of from the municipality.

Aaron Ranayeke of the C19 Peoples’ Coalition said residents paid more than business for electricity. He also said households who lived without adequate water and sanitation faced health risks. “It is unconstitutional for people to stay where there is no water and sanitation.”

“With Covid-19, people are told to wash their hands and not gather. If one tank is given to more than one hundred people they will gather” in large groups, he said.

“I will call a special council meeting. We will answer within seven days as demanded by the demonstrators”, said Melanie Dodds, speaker of Dawid Kruiper municipality.

But, Dodds said, the Upington Ratepayers’ Association had not come to a follow-up meeting on electricity prices; instead, they had come to protest.

ZF Mgcawu councillor Maryna Beukes said she would hand over the protesters’ demands to the mayor at the last council meeting of the year.

Next:  This is where evicted people go