Workers whose contracts ended in March are demanding to be reinstated 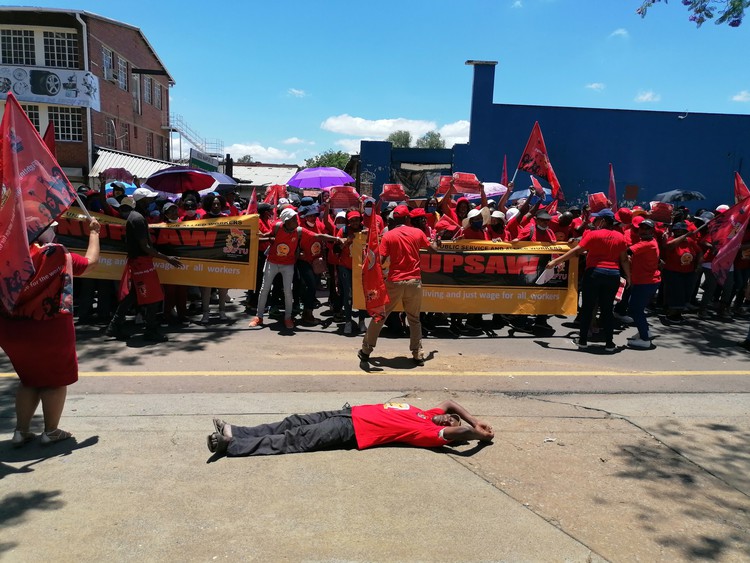 About 100 National Union of Public Service and Allied Workers (NUPSAW) members marched from Marabastad to the Gauteng Department of Infrastructure and Development in Pretoria Central on Wednesday.

The protesters want the department to reinstate all Expanded Public Works Programme (EPWP) workers who lost their jobs in March, with an additional eight months back pay. They also demanded that the department set up a task team to discuss permanently employing EPWP workers.

According to the department’s website, EPWP creates job opportunities for poor and unemployed people through the delivery of public and community services. It also provides training.

In its memorandum handed to the department on Wednesday, NUPSAW said the department promised 5,000 EPWP workers they would be trained but not all of them were. Most of the EPWP workers cleaned schools and hospitals, and worked in security and administration.

Solly Malema, national organiser of NUPSAW, said that EPWP contracts were meant to last between 12 and 18 months but there were workers who had been working for eight years.

Malema said that in March 2020, some EPWP workers received an SMS from the department stating that their employment contracts expiring on 31 March would not be renewed. He said this was contradictory to President Cyril Ramaphosa’s plan to protect jobs during the lockdown.

The memorandum was received by Ouma Ngobeni-Sipoya, Deputy Director of EPWP. She promised to respond to the union in seven days.

Previous:  Over 14,000 people estimated to be living on the streets of Cape Town