When driving past the Maitland Cemetery between Kensington and Goodwood, one can hardly miss the row of wood and zinc structures along Voortrekker Road. The settlement, once hidden by dense shrubbery, is home to about 50 families. They call it Olympic Park.

About 20 years ago, Freddie Fredrick and two friends moved onto the land after sleeping inside the graveyard for a number of years.

Residents here say they have been neglected by the City of Cape Town. GroundUp has established that the land is partly owned by an entity called the Ndabeni Communal Property Trust and the national Department of Public Works.

There is no electricity, the area is littered with rubbish, and there are very few communal toilets and taps on the property.

When GroundUp recently visited the settlement, residents explained that Olympic Park was divided into three sections. The first, they said, has two portable toilets and a communal tap. The second has two taps and no toilets, and the third has no services. Residents living in the third section have to walk about 500 metres to the nearest toilet and tap on the property.

Antea Anthony moved to Olympic Park from Bonteheuwel with two relatives about eight years ago. In 2016, the section she lives in was gutted by fire. Anthony’s six-month-old baby died in the blaze and her husband was severely burnt while trying to save their child in the burning shack.

Anthony said most people lost their IDs and other documents in the fire. Since then, she said, most of the children in the settlement, including her nine-year-old, do not attend school.

“We do piecemeal jobs in Goodwood and Thornton like gardening and char (cleaning) because we don’t have IDs. I’m struggling to get the R140 for ID application,” said Anthony.

Another resident, Camera Jonhson, lives in the second section. She said her eldest grandson, aged 17, was born there.

Johnson’s biggest concern is the piles of rubbish collecting around their homes. She said the settlement is not cleaned and there were no rubbish bins. Johnson said they also relieve themselves in the bush behind the settlement.

“No one listens to us. We must burn our garbage. It’s like the government is saying, you have a structure over your head, what more do you want?” she said.

Johnson said that in 2016 someone from the City of Cape Town visited the settlement to number their shacks. The person also told them that houses were going to be built for them. The City has denied this claim. 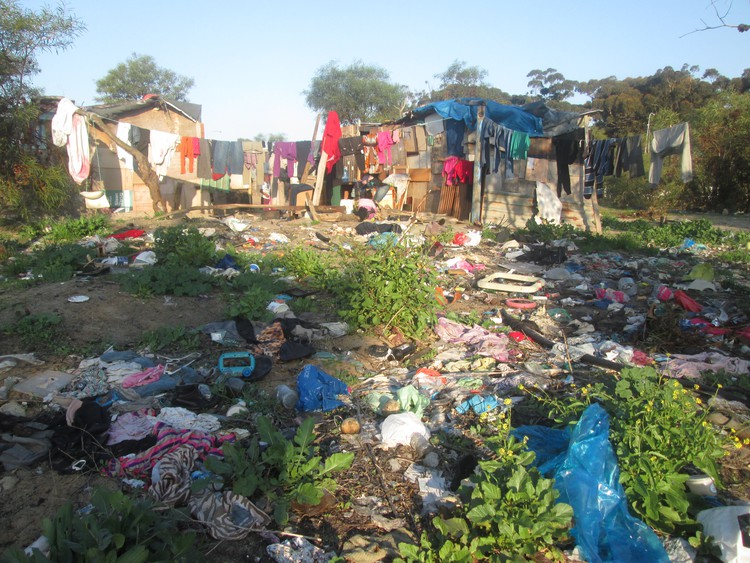 Father of four, Dean Williams, shared Johnson’s concerns. He said the garbage attracted snakes and rats. Both he and his son have been bitten on the face by rats.

Ward Councillor Helen Jacobs, in response to questions, said that because the first section has been in existence for many years, residents there were registered on the City’s Informal Settlement Management list. “Services were provided at the first settlement at a time when that was the only settlement. The other pockets of the privately owned land have now been illegally invaded,” she said.

Jacobs said when the fire burnt structures in the third section in 2016, all of the families were given emergency fire kit material. “We again explained [to residents] that we cannot give them toilets and taps because they are on private land,” she said.

Jacobs saidt the Ndabeni trustees had plans for the land, but did not specify what the plans were.

“There is too much hunger and poverty here. When they want our votes they say voting makes life better; better for who? … The City doesn’t cut grass surrounding us. They don’t want the world to know we exist,” said Williams.

Next:  Police and developers blame each other for unlawful eviction