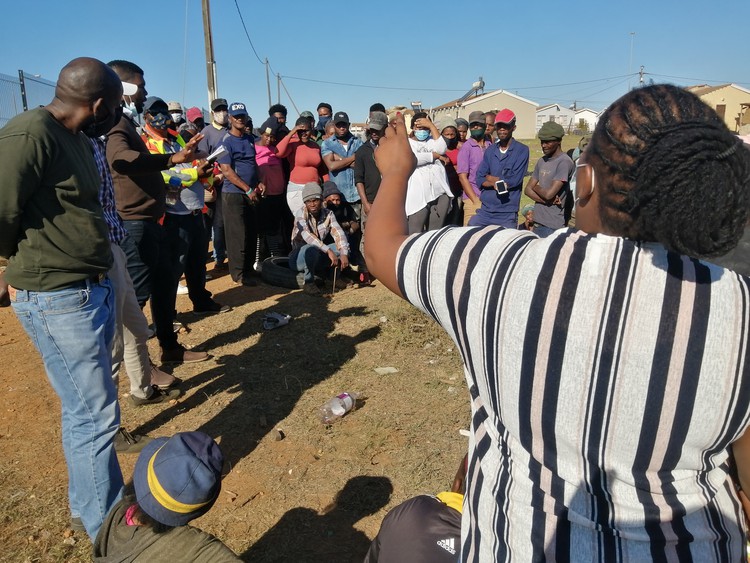 Residents from five informal settlements in Ward 41 under the Nelson Mandela Bay Municipality protested at the weekend, demanding electricity among other services. Photo: Mkhuseli Sizani

About 500 people from five informal settlements in ward 41 blocked R75 Uitenhage Road with burning tyres and rocks at the weekend, demanding electricity among other services.

During the protest, the vehicle of Ward 41 Councillor Simphiwe Tyukana (ANC) was petrol bombed in front of his house in Nkandla; an Algoa Plant Hire truck was hijacked and torched at Area 10’s play park; and a bread truck was stoned and looted in Joe Slovo. Public Order Police had to disperse the violent protesters.

The protest by residents of Nkandla, New Rest, Mhlolokotshana, Area 10 and Farmer informal settlements erupted when the Nelson Mandela Bay Municipality started installing electrical poles at Bayland informal settlement. But the City says the poles are just for lighting.

Residents argued that Bayland was established recently and only after residents there had violently protested in February, did the municipality start installing services like electricity and toilets at the settlement.

Mziwoxolo Desha, community leader of Nkandla, said that their informal settlements were established in 2017 but were yet to receive services, yet Bayland that only grew in 2019 was now being prioritised.

Desha said going to the toilet at night in the dark was dangerous, so many people prefer to relieve themselves in the bush near their shacks. All 1,500 shacks are expected to share 30 chemical toilets and four standpipes. “The municipality said we should de-densify our area in order to install electricity. Some of the residents relocated to other informal settlements to make way. But still the municipality has not installed the electricity. Roads are bumpy and we get stuck in the mud on wet days,” Desha said.

Thamie Zigoxo, chairperson of Area 10, told municipal officials who came to quell tensions, “How many times have we been engaging with you in these fruitless meetings? Since I became a community leader in 2019 I have been in and out of the municipal offices. What are you doing with our petitions?”

Zigoxo said without electricity, learners could not do their work at home because most school work is being sent via social media since the start of the pandemic and their cellphones are not able to charge regularly.

“Many people here survive on child support grants and pension. Paraffin is expensive. The open fires, candles and illegal electricity connections are dangerous,” he said.

Thando Tsepane, an official from the office of Mayco Member for Electricity Luxolo Namatte, told protesters that there was no budget for the electrification of shacks. He explained that Bayland was getting lights only because the area is dark, at a cost of R100,000.

“We won’t be able to electrify all your informal settlements in one financial year. We prioritise areas according to when they were started. But please give us a chance to go back to mayco and report your problems.”

The officials asked the residents to send four representatives to their offices on Tuesday at 10am to get feedback.

Next:  Police and shack dwellers clash over illegal connections in Gqeberha