Police and shack dwellers clash over illegal connections in Gqeberha 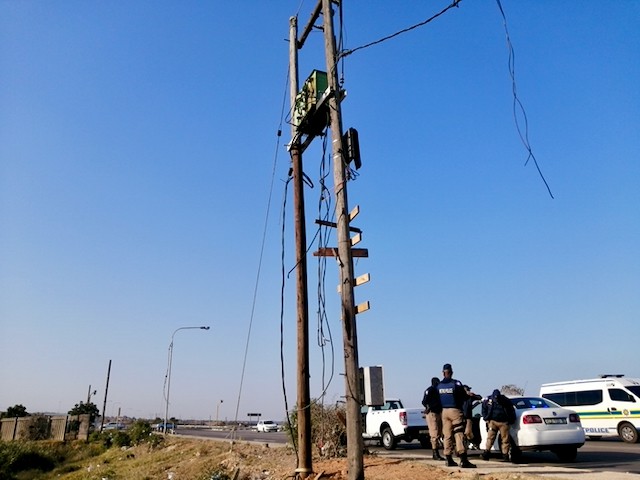 Police stand next to an electric transformer that residents connect to illegally on the M14 Bethelsdorp Road. Photo: Mkhuseli Sizani

For days tensions have been high in Gqeberha between police and Govan Mbeki Village shack dwellers over illegal electricity connections.

The protesters then moved to the M14 Bethelsdorp Road and closed it with burning tyres and rocks. Senior police officials had to be called to get the angry protesters to open the road.

Community leaders say the settlement was established in 2017 and has more than 600 shacks.

They use izinyoka (illegal connections) for electricity.

Masixolisane Mgoqi said, “Since Friday, we’ve had no electricity. Then on Sunday morning we decided to go to the transformer [on the M14], where we do izinyoka to check what was the problem. We found one of our cables has been damaged.

“While I was busy fixing it, six police officers from Bethelsdorp police station arrived in two vehicles. They insulted us. But I told them that they have no right to talk to us like that. One of them kicked me down. I stood up and threw him with a pliers on his chest.”

“He took my pliers and we argued with them. While we were arguing I grabbed his vehicle keys and dozens of residents came out to assist us. He gave me back my pliers and they sped off. Residents pelted them with stones,” he said.

Jazz Nantu, chairperson of the shack dwellers committee, said he confronted the police. “Listen here, you don’t have a right to insult and assault us when we do izinyoka connections … Stop provoking us. All that we want is electricity,” he apparently said.

Nantu said after they had protested in March, Mayco Member for Electricity Luxolo Namette and Ward 31 Councillor Nomazwi Sonti (ANC) had promised to respond to their electricity demands.

“Until today we have not heard from him and the ward councillor. Residents are very angry. They want their izinyoka connections to be restored and the municipality to give them electricity,” said Nantu.

Sonti said the hold up was because the Mayco Member for Human Settlements Mkuseli Mtsila had resigned. Namette needed to know if there was a development plan for the area or if people would be relocated. Namette has now been appointed deputy mayor.

“I will arrange a meeting with him, residents’ committee, and new mayco members from the relevant departments,” said Sonti.