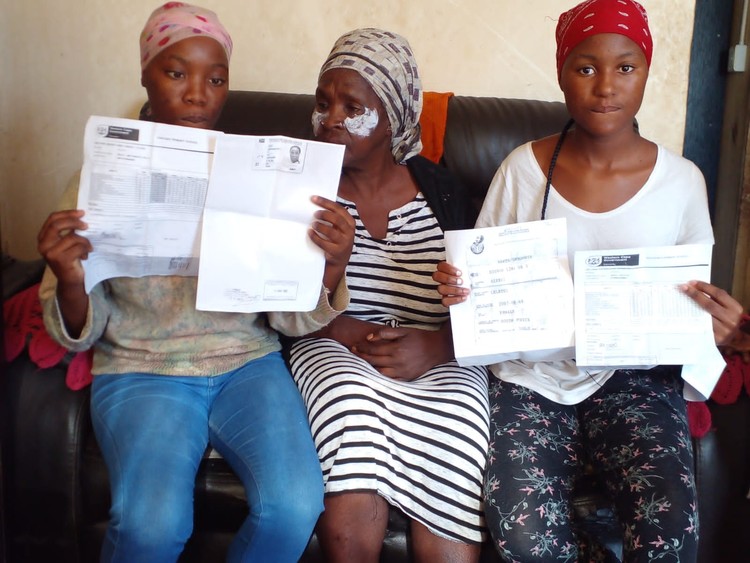 Simthandile Sikeyi (left) with her grandmother Beauty and younger sister Lelethu. Simthandile has not been placed at a high school for nearly two years and says she’s losing hope of ever starting grade 8. Photo: Nombulelo Damba-Hendrik.

For the last two years, 17-year-old Simthandi Sikeyi from Tafelsig on the Cape Flats has watched her peers go to school every day and progress while she sat at home. Her grandmother has been trying to find her a place at a school nearby since 2021 through the Western Cape Department of Education (WCED) office in Lentegeur, Mitchells Plain.

Simthandi told GroundUp that she had lost hope of starting high school this year. When she passed grade 7 at Cascade Primary School in 2020, her grandmother Beauty Sikeyi applied to two schools close to where they live but was unsuccessful.

Sikeyi said she then went to the department for assistance. She was told that schools were full for 2021 and she should register for 2022. “That hurt me, but I had no choice than to do it,” she said.

In May 2021, Sikeyi said, she again applied for high school placement for Simthandile and her 14-year-old sister, Lelethu. But neither sister had been placed at the start of the school year.

Her grandmother said she went to the department’s offices in Lentegeur more than ten times, begging them to place the children at a school.

Lelethu has now found a place at Tafelsig High School, but her older sister has not, though she has been on the waiting list since 2021.

“This is very traumatising and frustrating. When other children go to school I sleep just to avoid going outside because I have been asked by people why I’m not at school. I know it is my basic right to be at school,” said Simthandile. Her grandmother hopes she will be placed next year or she could lose interest in ever returning to school.

GroundUp sent a list of 12 unplaced learners to the WCED: seven grade 8 learners, two grade 7 learners, and three grade 10 learners, all from the Eastern Cape. Two of these learners have since been placed at schools.

In a joint statement, Phala and Jacobs said that in many instances, the parents and caregivers of unplaced learners have been told by the WCED that there are no spaces at schools. Many have been told to simply apply for 2023 with very little regard to the best interests of these learners, they said.

“Learners - many of whom are of compulsory school going age- will sit at home this year. The WCED has failed to fulfil its constitutional and legislative obligations to provide classroom space for all learners.”

Phala and Jacobs said in March 2021 they sent a joint letter to then MEC for Education Debbie Schafer, asking for the admission applications deadline for 2022 to be extended. The WCED subsequently extended the deadline for applications by four days.

They said that in a briefing to the Standing Committee on Education in May 2021, the WCED had noted the implications that an increase in learners had for school infrastructure, the number of teachers, resources, transport and feeding schemes. “However, lack of funding does not mean the department can bypass its obligation to place learners,” they said.

On Tuesday WCED spokesperson Bronagh Hammond said the department’s legal team wanted to address the matter with its legal counsel before they could respond.

Next:  Why independent healthcare inside prisons is vital