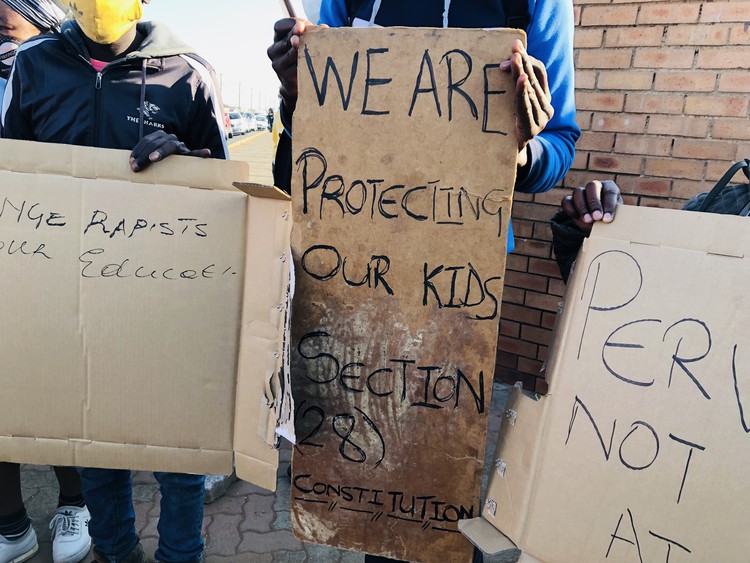 Parents and community members protest at the gates of Langaville Primary School near Brakpan, demanding that a teacher accused of sexual assault be removed. Photo: Kimberly Mutandiro

Parents have been protesting at the gates of Langaville Primary School near Brakpan for a week, demanding that a teacher accused of sexual assault be removed.

Following the ongoing pleas by parents, the Gauteng Department of Education this week confirmed to GroundUp that the teacher has been “temporarily removed” pending an investigation into the allegations.

On Monday, community activists and parents barricaded the entrance to the school while holding up posters calling for the teacher’s removal. It is alleged that a grade 5 learner at Langaville informed her grandmother that the accused had been making her and another female learner “do inappropriate things”. The grandmother then informed the principal three weeks ago and no action was apparently taken by the school.

The community was then informed and was outraged by the school’s inaction. They say other learners have since come forward, accusing the teacher of sexual abuse.

“The children say the teacher forces them to massage his feet and body in class and that he touches their private parts,” said Bafana Mazibuko, a representative from the South African National Civic Organisation (SANCO).

Resident Bheki Ngobeni said that the community is demanding that an investigation be done into the allegations against the teacher.

At around midday, Principal Khosi Mahlangu read the letter confirming the teacher’s temporary suspension in front of the crowd.

Solly Mashego, a representative from the department said, “The department had not been made aware of the matter. We are worried about the fact that children are missing classes because of these protests. However, the matter will be investigated.”

After the picket, 81 community members signed a petition to support the teacher’s suspension. They also forwarded a memorandum of demands, calling for more transparency in the employment of teachers at the school. Activists promised parents that they would monitor the investigation and give feedback.

The learner’s grandmother said, “I am very worried because my grandchild’s innocence has been taken away. I want justice to be served so that l can be at peace. If nothing is done this thing will continue and other children will be violated.”