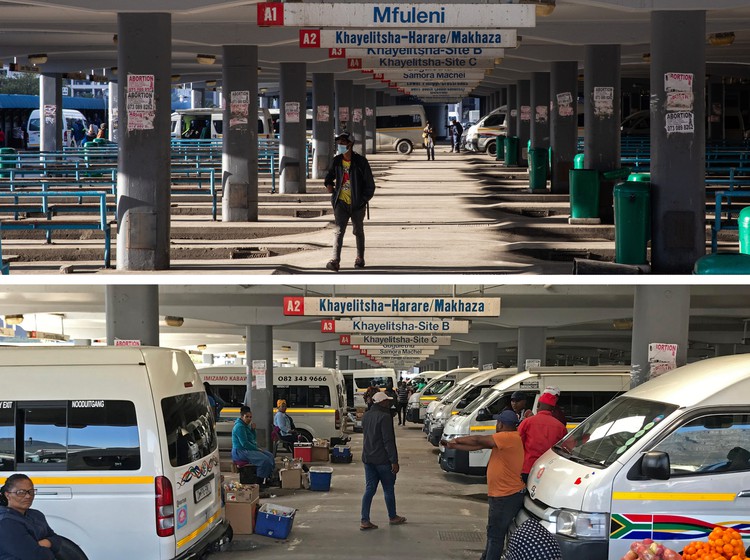 The top photo was taken on 20 July at the main taxi rank in Cape Town during taxi violence. The one below shows the rank, much busier, on Tuesday, 2 August, a day after Transport Minister Fikile Mbalula announced an agreement between rival taxi associations. Photos: Ashraf Hendricks

It was all hands on deck again for taxi operators on Tuesday, with the Congress for Democratic Taxi Associations (CODETA) reporting that its taxis were back on Cape Town roads.

This comes a day after Transport Minister Fikile Mbalula announced an agreement between rival taxi associations, CODETA and Cape Amalgamated Taxi Association (CATA). Mbalula has however kept the suspension of operations on the contested route B97 between Mbekweni, Paarl and Bellville in place.

Taxi violence over the past few weeks has left many Cape Town commuters stranded and unable to travel to work or school.

When GroundUp visited the Cape Town taxi rank on Tuesday afternoon, white minibus taxis filled the entire rank. This was a stark contrast to how empty the rank was less than a week ago.

CODETA spokesperson Andile Kanyi confirmed that “all of [their] fleet,” about 4,500 taxis, was operating. Members of the association already started operating again on Thursday, however at a limited capacity. They are avoiding route B97 at Mbalula’s instruction until a deal can be secured.

Meanwhile, at a press briefing on Monday, Mbalula said that all other routes would remain open and operators are to return to service and in line with their operating licences.

The closure of route B97 was initially meant to last for two months. But now, according to Lesley Sikhupela, secretary at CODETA, it may be reopened “as soon as the violence subsides”. He said that in the last two weeks, tensions between the rivals have subsided.

Mbalula also stated that once the contested route is reopened, only legal operating licence holders will be allowed to operate.

However, if there is a demand for more services on the route, affected municipalities, which include Drakenstein municipality and the City of Cape Town, must determine how many operating licences to issue, in accordance with the arbitration award yet to be determined.

Mbalula added that all routes would be monitored this week and action would be taken against all license holders who breach the agreement.

Next:  Cops who rape are rarely disciplined, data reveals