Taps have finally been installed in this settlement, but there’s no water in them 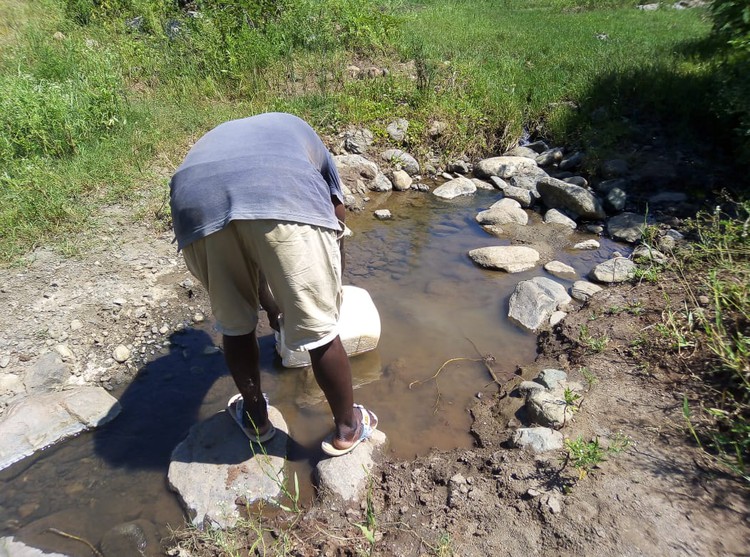 Resident Sthembiso Gasa says the water in the stream is muddy because it is used by cows and goats. Photo: Nokulunga Majola.

The promised standpipes have finally been installed in Emakhabeleni north of Kranskop in KwaZulu-Natal. But there is no water in them because of “water-shedding”, says the Umzinyathi District Municipality.

Last year, the municipality said the water problem was caused by population growth and pump failure at Emakhabeleni treatment plant. Spokesperson Nomonde Nzimakwe said then that 148 standpipes would be installed and a consultant had been hired to upgrade the amount of water the treatment plant can pump. But residents say things have gone from bad to worse.

They claim the water supply doesn’t even last a day. Resident Sphiwe Ngidi said even the streams are drying up. Another resident, Sakhile Masikane, said sometimes they don’t even know when there is water because the taps are not in their yards. “Only when we see people fetching water that we know there is water and sometimes by the time you get there, it’s gone. I am used to fetching water at the stream because we cannot live without water. Nobody bothers to tell us exactly what is going on. People are suffering, especially the elderly,” said Masikane.

Ward councillor Zenzele Dlomo said the situation is really bad and they thought things will get better but nothing has happened yet. “The water issue must be sorted out as soon as possible,” he said.

Current spokesperson for Umzinyathi District Municipality Nkanyiso Cebekhulu said the promised 148 standpipes had been installed and the municipality was currently sourcing funding for the upgrade of the water plant. “Processes are underway and work to be completed before the end of the financial year,” Cebekhulu said.

He said the municipality had implemented “water-shedding” to try to manage the demand.

Meanwhile, he said Umvoti Local Municipality, under which Emakhabeleni falls, has been allocated eight water tankers to supply water to the wards. However, residents claim they hardly see any water tankers.

Next:  National Lotteries Commission board is no longer quorate

Previous:  The “Friendly City” is filthy