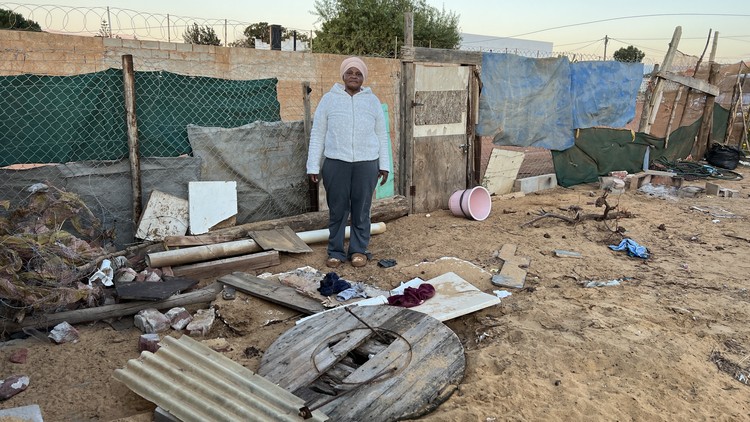 Sarah Fabie nearly lost her daughter in 2001, when the six-year-old fell into a pond from which families in Chatsworth in the Swartland drew their water. Furious, residents marched to Parliament demanding piped water. They won their battle, and today Fabie is the small town’s best-known community activist.

“Two men walking on the side of the road saw her legs sticking out of the pond and they pulled her out and called me to come. They saved her in time,” says Fabie.

After the protest, which was covered on television and drew national attention, piped water was installed to the little town on the slopes of Kanonkop hill, about 20km from Malmesbury.

But the community of 7,000 people feel they have been forgotten since then.

The roads are gravel, many of the homes do not have formal electricity connections, and there is no sewer system, only septic tanks. Residents are charged R285 a month for the tanks to be emptied by a municipal vacuum truck.

Fabie, who is now 60, founded the Chatsworth Advice and Development office in 2015. She shares her three-room shack with her four children, seven grandchildren, and one great-grandchild.

Fabie said the march and the stint on national television also got Eskom’s attention, and electricity was supplied to some of the homes, although many have illegal connections.

Fabie is a beacon of hope in the community. She uses her own pension and child support grant to run the advice office, tackling issues such housing, social grants, and service delivery, often travelling to the Swartland municipal offices in Malmesbury to resolve residents’ issues. She also visits the Legal Aid office in Malmesbury for advice on community cases, and travels to the Housing Development Agency offices in Cape Town, and to the provincial legislature to track housing subsidies.

But she says she does not know how to raise money for what she does.

“I help the community for free because I was abandoned by my parents when I was a child,” says Fabie. “Life was bad, tough. I was abused, raped three times in the early 1970s. I had to sleep on the street most of the time. The first two cases of rape, the perpetrator was my family member, the third case was a random man I don’t know. I remember these experiences as if they had happened yesterday.”

She says her grandmother taught her to offer a hand to someone who has fallen down.

“I remember when I could not get help from anyone. I cannot handle it when people need help and there is no one who can help them. I think God created me to go through all the bad experiences so I can be strong today to help my community.”

She said the Swartland municipality did not budget enough for Chatsworth. “They never discuss anything with this community. It is a neglected town.”

“It very tough to live here,” says Sindiswa Majiet, who lives in an RDP house with five children. “We have to do everything on our own. There is no recreation centre and our children fall into the trap of drug abuse, teenage pregnancy. There’s nothing to empower the youth to keep busy.”

She said what really upset people was that municipal law enforcement regularly came to Chatsworth and issued traffic fines. “They say our vehicles are not roadworthy, the lights are not working. But the gravel roads are damaging our cars.”

But Swartland municipal manager Joggie Scholtz says more than R100-million has been spent on basic infrastructure in Chatsworth, including R12-million on a water pipeline from Malmesbury to provide water and replace the borehole system; more than R3-million on a reservoir; more than R2.5-million on the upgrade of a wastewater treatment works and R8-million on sports facilities.

He says Chatsworth is one of 11 towns in the municipality which must share a constrained budget.

He says R8.5-million has been budgeted in the 2022-23 financial year for road upgrades.

Since 1999, 594 houses and 50 serviced sites have been provided in Chatsworth and Riverlands. Scholtz says 532 households in Chatsworth received support from the municipality for refuse removal services, water and electricity.