Prisoners give management an ultimatum 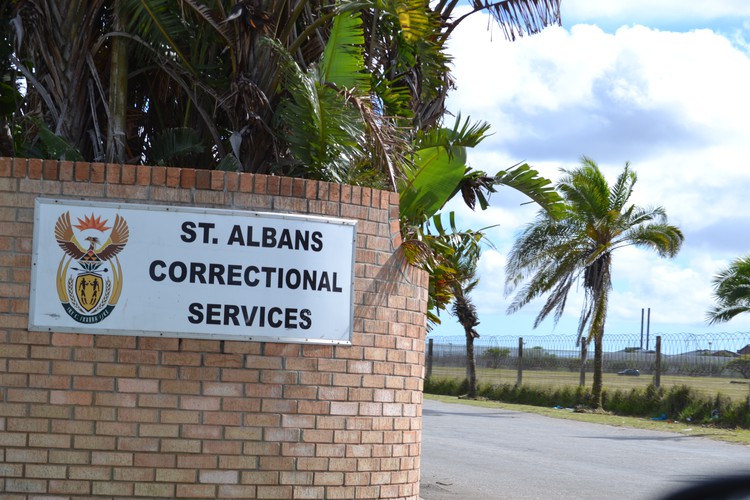 Prisoners at St. Albans Correctional Services went on a hunger strike over the weekend, demanding better conditions at the facility among other things. Photo: Thamsanqa Mbovane

Inmates at St Albans Centre near Gqeberha (Port Elizabeth) have given management 48 hours to respond to their demands for improved conditions at the facility.

On Monday, an inmate who asked not to be named told GroundUp that they held a three-day hunger strike which was called off late on Sunday.

“We have given them 48 hours to respond to all our demands, failing which there would be serious consequences,” he said. The inmate said cells were overcrowded. He said other complaints included that the prison was flouting Covid-19 safety regulations and infrastructure was dilapidated with water pipes leaking.

“We have about 44 inmates in each cell whilst Covid-19 also affects us all. [Management]’s only concern is for us to practise social distancing but we don’t get masks or sanitisers, and they don’t fumigate.”

Another inmate being held in Medium B section said, “We have been complaining for 17 months for the prison to be renovated. When we tabled our demands on Sunday afternoon, management gave us a good meal afterwards. But we will continue our protest if answers are not provided by Tuesday.”

Another inmate said there were regular water leaks and very few working lights around the prison. He also complained that prisoners were only allowed to exercise for 30 minutes a day. “We have nothing to relieve stress,” he said.

Department of Correctional Services spokesperson Singabakho Nxumalo said he was not aware of the hunger strike when contacted by GroundUp. He said inmates were allowed to “register their requests and complaints” every day and the head of the centre responded.

In response to claims that the prison is flouting safety precautions, Nxumalo said the Covid-19 procedures in place were working and there were currently no new infections among inmates.

On the maintenance, he said they responded to issues regularly and where needed and “elevated complaints to Public Works where extensive work is needed. A number of our centres are old and from time-to-time do require attention.”

Meanwhile, Golden Miles Bhudu, spokesperson for the South African Prisoners’ Organization for Human Rights (SAPOHR) said the complaints by prisoners at St Albans were valid and had been “coming for years.”

Bhudu said long before national lockdown, prisoners had been complaining about overcrowding, unhygienic food practices, and lack of exercise among other things. He said lack of exercise was among the reasons inmates were “led to join prison gangs as a means of recreation”.

He said the problems were sadly not unique at correctional facilities. “SAPOHR thinks that those tenderpreneurs benefiting from BOSASA Group forever food tenders, are now sabotaging the process.”

Previous:  A dying man makes the case for legalising euthanasia