Backyard dwellers in Dunoon near Milnerton who earlier this year occupied a municipal sportsfield have survived continual demolitions of their shacks and have kept rebuilding. In response to the demolitions there were violent protests. MyCiti bus infrastructure was destroyed. But since June they have been left alone. They have now named the new informal settlement Ekupholeni, meaning a relaxing place.

Some have carved out bigger yards and some have since established vegetable gardens. Some have sold a portion of the plots so they can buy building materials. Small businesses are already thriving; spaza and hardware shops are fully stocked. A number of people have installed satellite dishes on the roofs of their shacks. One occupier is building a double-storey shack.

The community has put money together to buy a pipe to connect a communal standpipe for water. Some residents have bought bucket toilets and placed them in their yards. They charge for their use. But most residents still relieve themselves in the bushes near the Transnet Freight Railway line.

“Life is very nice here. I have my privacy. I even started a vegetable garden and I plan to operate my printing business in my yard,” says Mancane Thembelani. He also plans to build a three-bedroom house on his plot.

“Waiting for service delivery takes took long and we forcibly occupied this land and they will delay services just to punish us. Getting electricity will be nice here. The City can benefit as we can afford to buy our own electricity rather than connecting to the grid illegally,” says Thembelani. 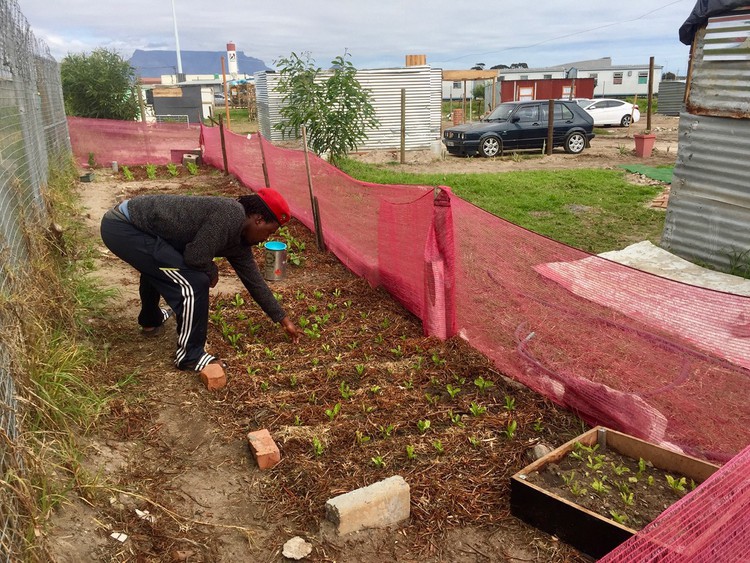 Mancane Thembelani enlarged his plot for growing his own vegetables. Photo: Peter Luhanga

People seeking vacant space to build a shack, have to first get authorisation from leaders in this informal settlement because they say they are the ones who fought for the land.

Xolisile Macala joined the land occupiers after negotiating with community leaders. Macala used to stay at the back of an RDP house in Dunoon paying R900 a month with electricity. Now he pays no rent as he has since built a one-room shack on the municipal sports field.

In June there were about 100 shacks; now there are about 300 homes on the land, according to one of the leaders.

Macala says that in July he asked community leaders at Robben Island informal settlement if they would lend him a bucket toilet. To his surprise they agreed. He has since placed it in his yard and locks it. Twenty households make use of the toilet for free. Together with his neighbour, he buys cleaning liquids and toilet paper.

When the toilet was full, he asked a City of Cape Town bucket toilet cleaning contractor to pump it out. “We don’t pay them. We just buy them a cooldrink,” he says.

Vuyani Tyobeka, who previously rented a shack in the Doornbach informal settlement, now also lives rent free at the sportsfield in a one-room shack.

Tyobeka, together with his brother, runs a hardware shop. Their business is flourishing. When residents are building shacks they don’t have to go far; they can buy building materials from the two brothers.

“Our stock finishes in a week,” says Tyobeka.

The City was approached for comment on 24 August, but has not yet responded. 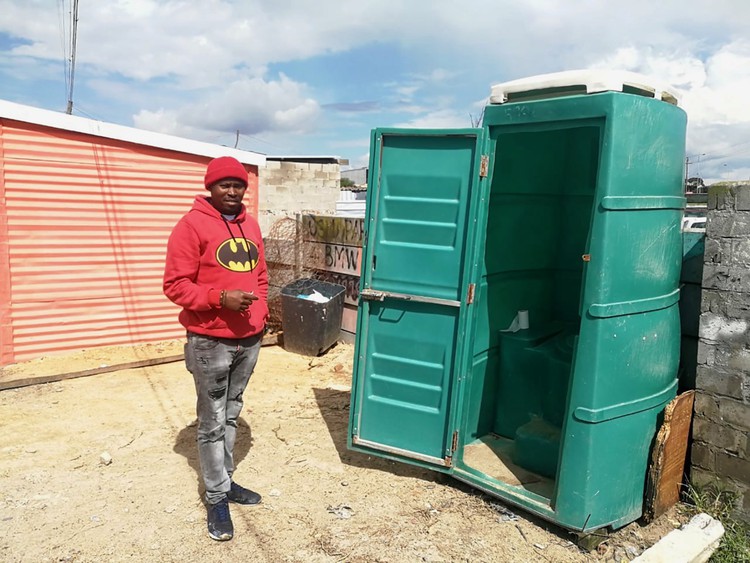 Xolisile Macala obtained this toilet which is now used by 20 families. Other families relieve themselves in the bushes near the informal settlement. Photo: Peter Luhanga