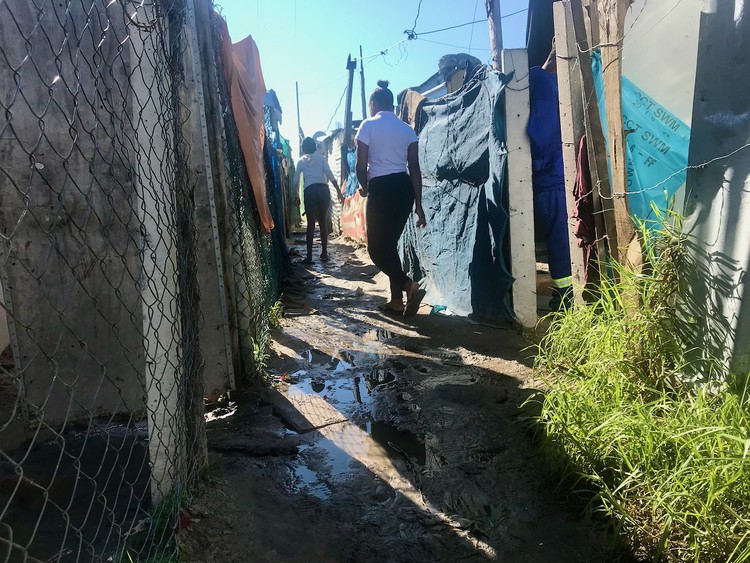 A week after it rained, some paths of Sophiatown informal settlement near Kuilsriver were still muddy. “I wear gumboots and carry the children one by one on my back and leave them by the main road. I then wait for them again when they finish school and carry them back to our shack,” a resident told GroundUp. Photo: Tariro Washinyira

Uncollected garbage, flooded shacks, and dangerous illegal electricity connections are just some of the many daily challenges experienced by families in Sophiatown informal settlement near Kuilsriver.

About 600 families live in overcrowded Sophiatown. Residents say they have been waiting for houses promised to them by the government 20 years ago.

In March 2019, residents from Sophia Town joined several other informal settlements and marched to the Western Cape Department of Human Settlements and the Civic Centre in Cape Town, calling for housing, toilets, and electricity.

GroundUp visited the area on youth day and saw piles of rubbish dumped in front of the toilets, flooded shacks in some parts of the area, muddy pathways to leaking tapes, and a web of illegal electricity connections.

Resident Julius Ngomane, 60, said he moved to Sophiatown from Gauteng in 2000, when there were just ten shacks on the land. He worked as a bricklayer for a construction company in Kuilsriver before retiring.

“In 2001 we were promised to be moved to new houses. The City of Cape Town and Human Settlement Department last visited us in 2015. They counted shacks, wrote numbers on the shacks and asked why the shacks are increasing,” he said.

Xoliswa Welana, a mother of three young children, was busy taking her furniture out to dry in the sun. She said it was a week after it had rained but her shack had not dried up yet.

“I moved from Kuilsriver in 2015 when I lost my job. I could not afford to pay rent. Because of flooding it is difficult for children to walk to school in the morning, so I wear gumboots and carry the children one by one on my back and leave them by the main road. I then wait for them again when they finish school and carry them back to our shack,” she said.

Community leader Siza Tshalisi said he had been to Kraaifontein’s Oostenberg municipality early in 2020 to seek help with electrification and relocation. He was told the City could not develop the land as it belongs to PRASA and there was no relocation plan in place for them.

“Over 1,500 people are staying here. Three to six people are sharing a shack. We were rejected by all ward councillors because we don’t know which ward we fall under. We are now depending on the activist Latifa Jacobs who does a lot of community work here,” he said.

“Unemployment rate is very high here. People just wake up and bask in the sun because they don’t have work to do. We are staying in floods and people walk about two kilometres to fetch water. They queue for one tap that works well. The other three taps leak and run too slow. We just buried a person three months ago who was electrocuted, two others are still recovering,” he said.

When asked, the City confirmed that a promise had been made by a private developer who spoke to the original 34 occupiers. The City said it had only recorded 145 families in 2015.

Councillor Malusi Booi, Mayoral Committee Member for Human Settlements, said that the new occupiers — which could be about 450 structures — are built where a railway line is to be constructed. He said this group was never part of any negotiations for housing with the City or the private developer.

“The original settlement was created in the early 2000s and complete recordings of people residing there were made in 2015. These people have been in long-standing engagements with the City, the other land owner, PRASA and a private developer,” he said.

“By January 2018, most of the existing illegal dwellers had settled. These land invasions after 2015 apply to the section where the railway line is to be constructed.”

Booi said the City had visited the area recently and would be talking to residents until a solution is reached.

“The City cannot install services in informal settlements on land that is not suitable for human habitation due to railway lines and wetlands,” he said.

Next:  Protest in Hout Bay over payment for lobster rights

Previous:  “This is not a land grab. We are taking back what belongs to us”