Protesters demand that City Power restore the power supply, after a 13 day outage 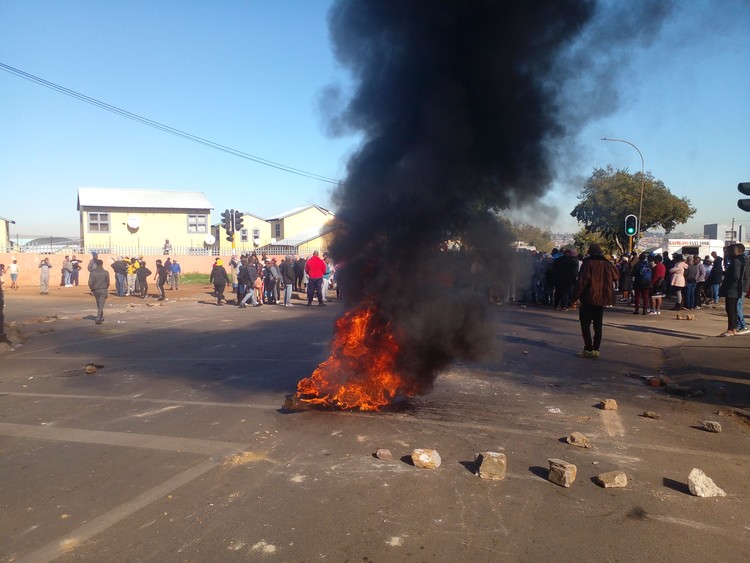 Residents of Kliptown and Pimville in Soweto protested on Tuesday demanding that City Power restore their electricity immediately. They have been without power for 13 days since a substation burnt. Photo: Chris Gilili

Residents of Kliptown and Pimville near the Walter Sisulu Square in Soweto blocked roads in the Johannesburg township with burning tyres, rubble and stones on Tuesday. They are demanding that City Power restore electricity immediately.

Protesters say thousands of people living in flats at Walter Sisulu Square have been without electricity for 13 days. A substation in Eldorado Park blew on Good Friday, leaving most of the surrounding neighbourhoods in the dark. City Power restored the electricity to some areas on Thursday but some are still without power.

“People are throwing away food on a daily basis. In our flat we have a disabled young boy, who is bed ridden and survives on oxygen,” said Sonto Simelane, who lives at the flats owned by the Johannesburg Social Housing Company.

Simphiwe Ndlovu lives at the Pimville Golf Course flats. He said residents are frustrated. “Kids can’t study and some skip school because of the power issue. We throw away spoiled food. We are so tired of this,” said Ndlovu.

Residents also alleged that a cable theft syndicate operating in and around Kliptown is behind their power problems.

Business owner and Pimville Zone 9 resident, Sybil Louw, said she was forced to close her restaurant until electricity is restored. “We cannot operate without power.”

“The greatest concern is cable theft. Thugs have stripped all the cables from the Walter Sisulu Square.”

Ward 22 councillor Sebenzile Mabuza said she was talking to City Power to resolve the issue and pleaded with residents to be more patient.

City Power spokesperson Isaac Mangena said several days of repair work were needed on the burnt substation before power could safely be restored. He said the problem was exacerbated by frequent incidents of vandalism and cable theft.

Next:  You chose electricity and toilets instead of houses, families told

Previous:  Labour department rules that classrooms at Limpopo school are too dangerous to use