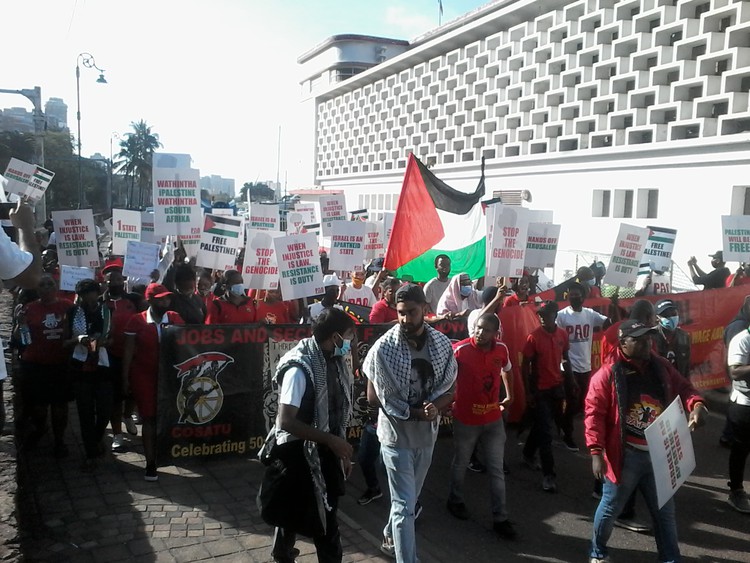 Over 200 people from various trade unions, civil organisations and South African BDS Coalition protested at the Durban harbour on Friday in solidarity with workers who stalled the unloading of an Israeli-owned vessel. Photo: Nokulunga Majola

Over 200 people protested on the Durban esplanade and port on Friday to support dockworkers who refused to unload an Israeli-owned vessel, Zim Shanghai.

On Thursday, workers organised via the South African Transport and Allied Workers Union (SATAWU) had refused to offload the Zim Shanghai, a ship owned by the Israeli state-owned company Zim Lines that arrived the day before. This followed a call by the Palestine General Federation of Trade Unions (PGFTU) for workers and trade unions to refuse to unload Israel ships and goods from sea and airports.

Na’eem Jeenah of the BDS Coalition said the action against the vessel is part of a global actions against Zim Lines. He said it is their way of showing solidarity with Palestine. He said the protesters are also targeting Transnet, demanding that it prevent goods to or from Israel from passing through South African ports.

Moses Mautsoe, provincial secretary of the South African Federation of the Trade Unions (SAFTU) said, “We are here to tell the KZN government to put their money where their mouth is. We cannot continue to receive cargo and shipments from Israel. We are here to say that if they continue, we are going to force our members to reject everything that comes from that side.”

Provincial secretary of COSATU, Edwin Mkhize, said that South Africa should not allow goods from Israel. “We know what is happening in Palestine where women and children are being brutally killed and displaced from their land. This must come to an end. We need to boycott Israeli goods. Let Palestine be free.”

Anele Kiet, Deputy General Secretary Satawu) said the workers action was their way of heeding the call by the Palestinian BDS Committee-affiliated SA BDS Coalition. He said their members together with civil society organisations would stage lunch time pickets in solidarity with the call for Israel to end its occupation of Palestinian territory.

Transnet did not respond to our request for comment by the time of publication.