Leader of the shack dweller movement Abahlali baseMjondolo, Sibusiso Zikode, and hundreds, perhaps thousands, of its members took to the streets of Durban on Monday. Zikode has been in hiding, fearing for his life.

The march, led by the movement’s provincial chairperson, Mqapheli Bonono, walked from Curries Fountain to City Hall where the protesters delivered a detailed memorandum to Brigadier Tefo Mpete of the SAPS provincial office.

“Abahlali came out in their numbers today, and the city came to a standstill. If the City continues not to take us seriously, we will no longer have a legal march, we will do more than put the city to a standstill. We are tired of being treated less than dogs,” said Bonono.

Surrounded by three bodyguards, Zikode urged members of the movement to fight for their place in South Africa. “We are the last people to be homeless in South Africa. Why are we being killed by our own for wanting land and development? Is it because we are poor?” asked Zikode.

With banners and chants, the marchers said they were tired of killings, intimidation and illegal evictions. They also condemned the corruption of ward councillors.

Abahlali were joined by other organisations, including the Market Users Committee, Ubunye Bamahostela, the Congolese Solidarity Campaign, members of the National Union of Metal Workers of South Africa (NUMSA), and the South African Federation of Trade Unions (SAFTU).

Zikode said the municipality has seven days to respond. The organisation has demanded a commission of inquiry to investigate the killing of its members, state protection for the members whose lives are being threatened, as well as full disclosure and inclusion in the housing developments in Durban. It also demanded full disclosure of the housing budget in Durban.

At least 16 activists aligned to Abahlali BaseMjondolo have been killed since 2013. The repression against the movement has seen a sharp increase in the last year according to members. On 22 May, S’fiso Ngcobo, a local chairperson of the movement, was assassinated in eKukhayeni, Marianhill, outside Durban. 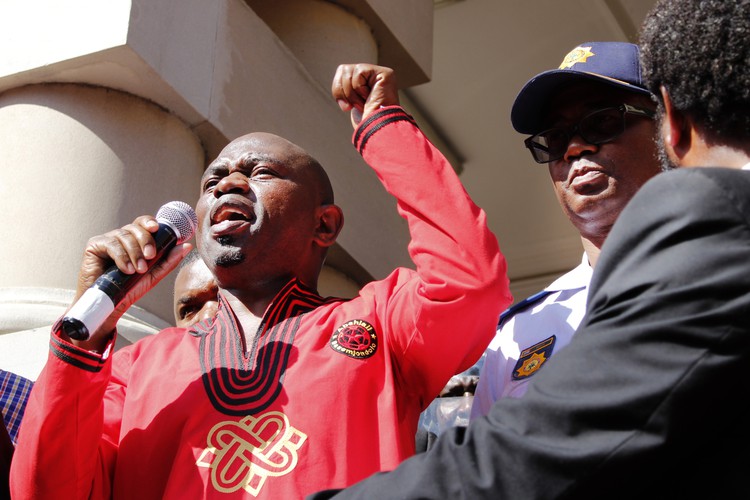 They carried makeshift coffins in remembrance of the activists that have been killed.

“We are at a point where we are no longer fearful. We have become experts on burying our comrades,” said Abahlali baseMjondolo spokesperson Thapelo Mohapi.

Mohape said the organisation was happy with the solidarity that it has been getting from different civil society organisations across the country.

“We are here to say enough is enough. Within seven months Abahlali baseMjondolo has lost seven leaders at the hands of hitmen and the anti-land invasion unit in KwaZulu-Natal,” said Mohape.

SJC secretary general Axolile Notywala said the march was for activists across the country and not just those in Durban.

“There cannot be places where people are being killed for demanding basic services, for demanding housing and for asking for the right [for the people of Xolobeni] to say no [to mining]. We know the comrades from Xolobeni are also being targeted. It is happening across the country,” said Notywala

The march also highlighted the deaths of other activists like Sikhosiphi Bazooka Rhadebe from Amadiba Crisis Committee in Xolobeni, Philela Gilwa and Mthunzi ‘Ras’ Zuma from the Town two land occupation and Zamuxolo “Rasta” Patrick Dolophini from the Helen Bowden occupation.

Zaba said the memorandum will be sent to the office of the provincial commissioner who will send it to SAPS’s national office.

Next:  Wrongfully convicted men struggle to get compensation

Previous:  They were forcibly removed under apartheid. Now they want their land back. But it’s occupied.