“Serving from the pot, you pray that the food is enough” 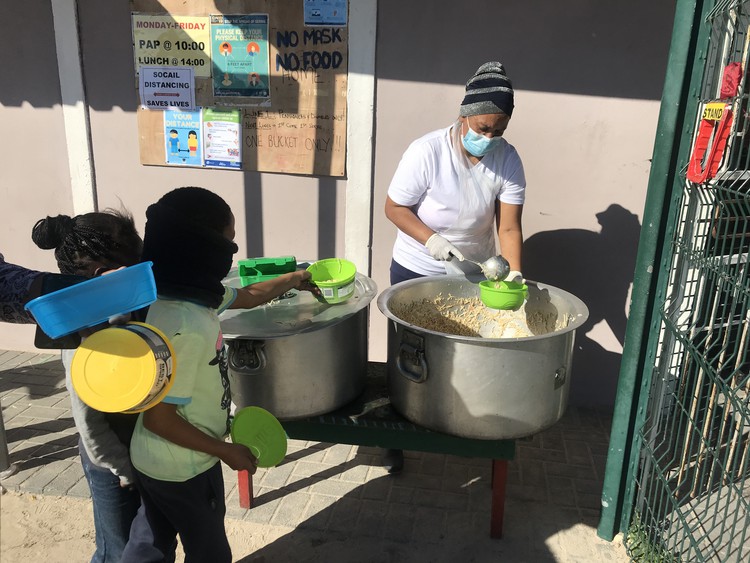 Farida Ryklief in Delft, Cape Town, feeds over a thousand people in her community daily. She says many residents have lost jobs during the pandemic. Some are selling their household appliances to pay for basic necessities such as electricity and bread. Photo: Tariro Washinyira

A Delft resident who has been running a soup kitchen near her home since lockdown last year had to use some of her family’s savings to keep feeding people.

Last year we reported that Farida Ryklief was feeding about 700 people from her community daily. When we visited her on Wednesday, Ryklief said this number had increased to at least 1,000 people, most of whom are young children and the elderly.

There were three lines divided into age groups. They were served noodles with Vienna sausages. Some people collected food parcels donated for Mandela Day.

“Many Delft residents have lost jobs and have resorted to selling their household appliances to buy electricity and bread. They can’t afford to buy a bar of soap,” said Ryklief.

“Living without any income has exacerbated domestic violence. Last week two of our recipients were beaten in front of the children in the queue by their spouses. Pensioners who are looking after grandchildren are struggling to get grants from SASSA offices. They can’t afford a smartphone to send emails and scan documents for online applications.”

Ryklief said that the increase of people coming for food has made it impossible to continue to serve inside. She now serves outside.

“Serving from the pot, you pray that the food is enough. Some of the people don’t move away until they see that the pot is really empty,” she said.

Currently, Ryklief has one donor, Shabier Esak. Funding from Breadline Africa and the City of Cape Town ended in June. “Sending applications for funding is a process and I can’t wait until the applications have been approved. They need to eat. I can’t turn them away.”

Last summer, they started a vegetable garden that has helped provide some produce for the meals. They grow spinach, chillies, carrots and herbs.

Alison Arendse, 55, lost her job last year. She said her application for the R350 Covid-19 grant was rejected because her children are getting grants. “There is nothing in my house right now. It’s like everything is going wrong for me. I am looking for a piece job. I have a sewing machine but people around here expect me to stitch broken stuff for R5. I can’t work for free,” she said.

Caroline Farmer, 62, was standing in line with three young children. “Only one of my three children living in the backyard is working. I take seven pills at a time. Last night I was without food and couldn’t take my medication. I once collapsed in the queue because of hunger,” she said. 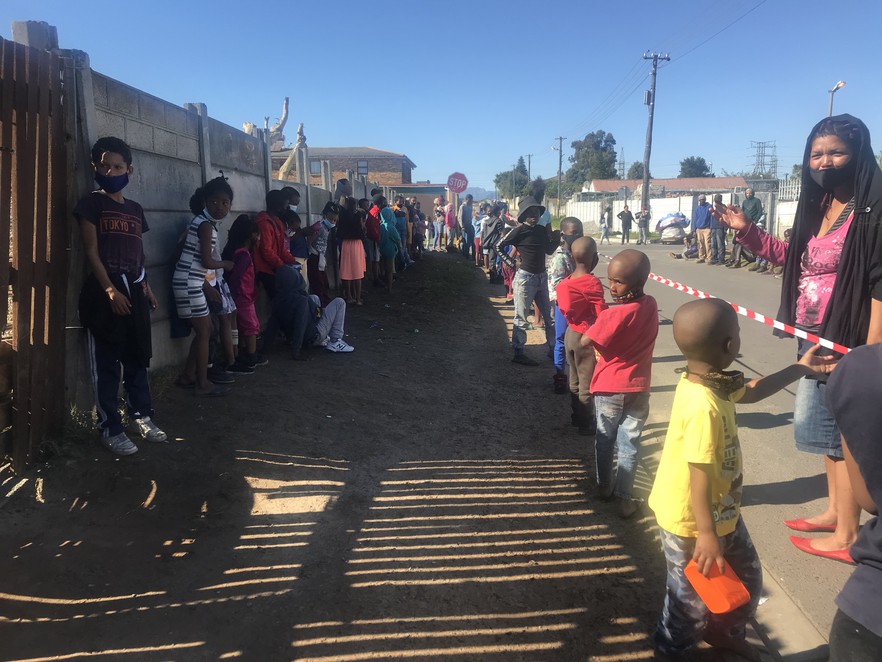 Dozens of children wait in snaking lines for a warm meal from a soup kitchen run by community activist Latifa Jacobs from her home in Kuilsriver. She says they feed thousands of people. Photo: Tariro Washinyira

When we arrived, children were standing in two queues cordoned off with red tape. The queues meandered into an open field forming several shorter queues, while adults waited in a separate line. Volunteers went around enforcing Covid-19 safety measures.

“We have revamped parts of the house and turned one of the rooms into a kitchen merely for cooking and serving. We have also improved, from a two to six-burner gas stove.”

“I receive donations from Hillsong church and Community Chest food hub that brings supplies once a month as well as from friends and family. With the stop of R350 grants, we have many people coming because they still don’t have employment,” she said.

Doroth Fortain, 69, from Happy Valley said, “I am grateful and I enjoy the food. Sometimes we get samp and beans, soup, or macaroni and mince. Most of us are relying on this food. People in my community are starving inside their homes because they are jobless.”

Next:  Small traders suffering as a result of Cape Town taxi violence

Previous:  Taxi violence: “It is like organised crime trying to take over the economy of the Western Cape”