At least two people were arrested and a dozen others sustained minor injuries during clashes between the police and residents of Diazville in Saldanha Bay on Thursday.

Residents of the West Coast town have accused the municipality of sidelining poor people in Saldanha Bay. A lack of housing; high water and electricity tariffs; and the municipality’s “unfair subsidy terms” were some of the concerns voiced by residents.

In the early hours of Friday morning, police said protests had flared up again, with another shop looted. Calm has since been restored to the area.

The protest came in the wake of unrest in Vredenburg which started on Monday. The town is situated about 20 kilometres from Diazville. Residents there are also demanding that the municipality provide housing and cheaper water and electricity fees, among other things.

On Thursday, most of the shops in and around Diazville remained closed. The main road into the area was littered with large stones and charred tyres. The two schools in the area remained closed. Only matriculants were escorted out of the area to write exams at a secure venue.

The Diazville community hall, a municipal office and part of a local holiday resort were burnt. Several homes and vehicles were also damaged and a local butchery was ransacked. The local clinic was also burnt.

“This was the closest clinic people could go to. The one closer to town is smaller and is always full. People with chronic illnesses and those who need to visit the clinic every day will suffer the most,” said resident Janine Paulse, pointing to the gutted clinic building.

Paulse recalled hearing people shouting and “loud sounds” in the early hours of Thursday morning. “Now people really won’t get houses because all of that money will go to fixing these buildings,” she said.

Tensions flared again around midday. Sporadic cat-and-mouse games ensued between the Public Order Policing members and groups of young boys in the community. They pelted police with stones and the police retaliated by shooting teargas canisters and rubber bullets.

“Those are skollies throwing stones. They don’t even know what we are protesting for,” a woman shouted from her porch. “The police are shooting teargas in our yards. They don’t care that I have a two-year-old inside. Her eyes are swelling up.” 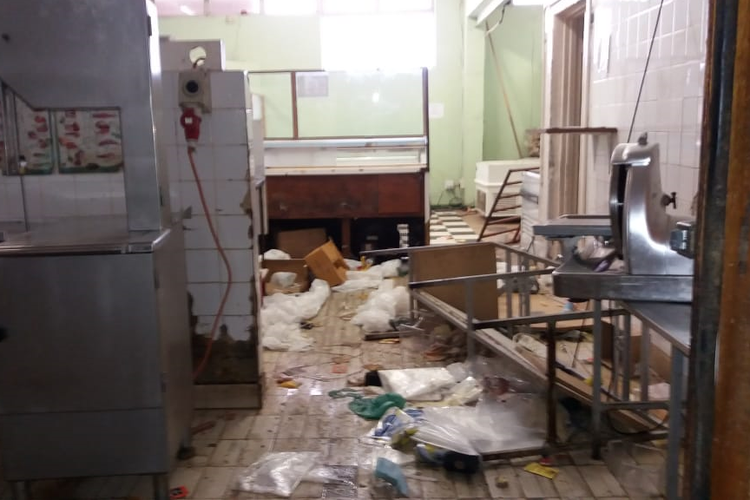 Minty’s Meat Market, a butchery in Saldanha Bay, was looted.

Earlier, community leaders — most of whom are also ANC and EFF office bearers — told GroundUp that people were “frustrated and tired” of their pleas going unanswered by the DA-run municipality.

“There were a number of legal marches to the municipality before the mayhem started [in Vredenburg] on Monday. We still don’t have a proper explanation for the high water and electricity bills,” said Eugene du Toit. He grew up in Vredenburg and has lived in Saldanha Bay for over a decade.

Du Toit, who is also the EFF’s regional deputy chairman, insisted that the protests “were not a political ploy” but instead were led by residents, highlighting “valid plights” in the community.

He said the budget allocated to Saldanha Bay was not enough to adequately provide services and alleviate poverty. “We have two squatter camps — Iraq and Marikana — where people have been living for years without services. But we have one of the lowest budgets.”

Resident Carina Jordaan said, “We want affordable service delivery. Some people have to pay high bills because of leaks in the pipes and those without bins still has to pay for refuse. It’s not fair.”

Another community leader Simphiwe Jantjies pointed to a new housing development called Hopland on the outskirts of Diazville. There, he said, residents were living without electricity for months. They also complained of shoddy workmanship.

By 3:30pm, about 1,500 people gathered in the main road into Diazville as word spread that Saldanha Bay Mayor Marius Koen was on his way and would personally accept a memorandum of demands.

A large contingent of heavily armed police officers stood watch as Koen read out the memorandum and signed it. “We will discuss this with the leaders during a meeting [at the police station],” he said.

The momentary calm was again broken as several stones were thrown towards Koen and the officials. He was immediately escorted out of the area. Protesters scattered as police retaliated with rubber bullets and teargas.

During the meeting at the Saldanha Bay police station, Major-general Manci, said, “We could’ve been injured if we didn’t run today. The mayor wants to meet with legitimate people to discuss issues involving the wards. We want to be able to leave here with a plan.” 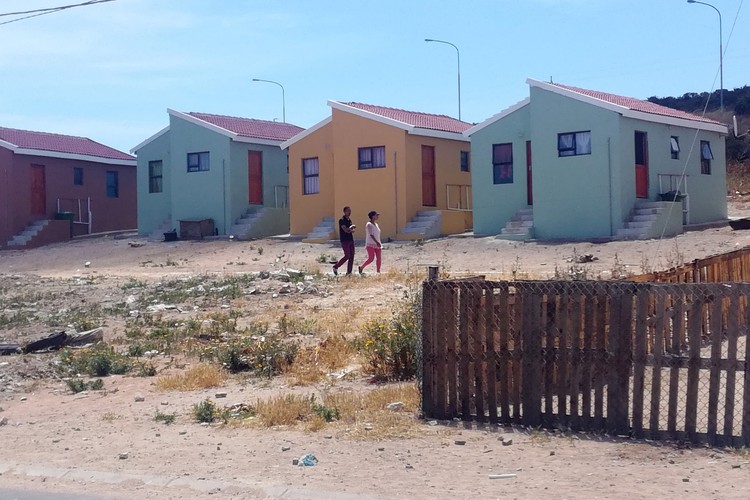 Some residents live in RDP houses like those shown above, but many live in shacks. The area is run down.

Nissen reprimanded leaders, saying the community’s conduct “only created more problems”. He urged the leaders to assist police in restoring calm to the area and to caution residents against spreading rumours on social media. “We don’t want to monitor through social media but people are posting on Facebook rumours that the multipurpose centre will be burnt and of further violence,” he said.

The mayor then set up a task team with leaders to deal with the issues raised by the community. This team are expected to meet again next Thursday.

Meanwhile, community leaders at the meeting, distanced themselves from the violence but added that many people were angry that Koen did not use a loud-hailer while addressing residents.

During a telephonic interview, spokesperson for the municipality, Ethne Julius said a formal statement in response to Thursday’s protest would be sent out on Friday. She added that because the municipality was already in the midst of the current financial year, there was very little it would do to accomodate most of the demands made by residents of both Vredenburg and Saldanha. 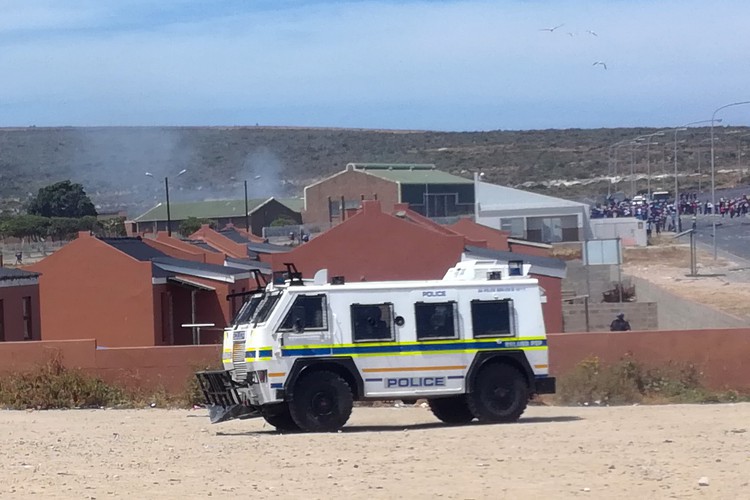 A Nyala drives along the edge of Diazville. In the background protesters and police are clashing.

Next:  Billions spent on railway contracts. Yet Metrorail collapses

Previous:  Living on a dumpsite since 1992