The Madibeng mayor told protesters that the municipality is broke and can’t pay back its more than R200-million debt to the City of Tshwane. 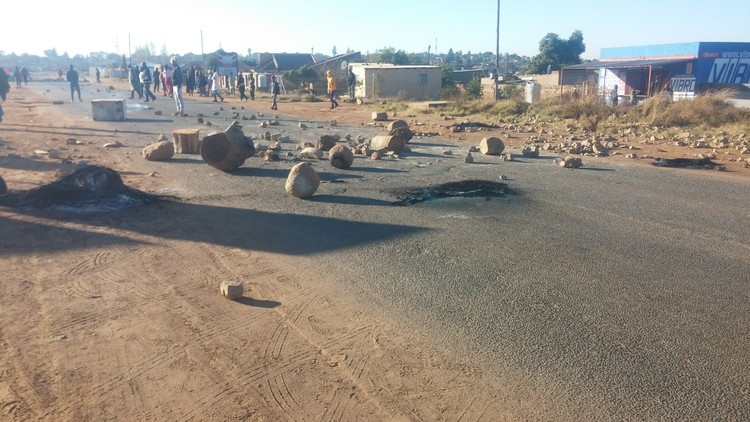 Over 200 people blocked streets with burning tyres and rubble in Kgabalatsane, Hebron, in North West on Tuesday. They have not had running water since October. Photo: Chris Gilili

Over 200 people blocked streets with burning tyres and rubble in Kgabalatsane, in Hebron, North West, on Tuesday over water issues, among other complaints.

Residents claim that their water has been off since October 2021 and that water tankers have been inconsistent in townships.

Mashilo Nkoane, resident and a member of the South African National Civic Organisation (SANCO) said most households have been without water for eight months and their pleas for help have been futile.

Nkoane said the last straw was in April, when they were called to a meeting with the Mayco Member for infrastructure in Madibeng Fenky Phaloane, but the meeting never happened.

In February, GroundUp reported that many households in Madibeng municipality have resorted to collecting water from streams and have to walk long distances since communal taps ran dry. News24 reported in August that the City of Tshwane threatened to restrict water supply to Madibeng because the local municipality owed it over R200-million.

Resident Elsie Dlamini said that in her area a contractor installed taps, but no water comes out of them. “We don’t need tankers. We need water from our taps. We are tired of the lip service and want a time frame for our problems to be addressed.”

Madibeng Mayor, Douglas Maimane, came with a police escort to try and calm protesters. “The reality is that we owe the City of Tshwane over R249-million for water services. We are broke and don’t have money to pay our [water] debt as Madibeng.

“I can’t say when your taps will have water again. We asked to meet with the Tshwane mayor to convince them to release the pressure while we find ways to repay this debt,” he said.

Maimane told protesters that there were “corruption elements” in the rollout of water tankers in communities. “These trucks are supposed to give you clean water consistently. If that is not happening, it means we are failing you as a municipality. It is our fault and we will fix it,” he said.

Maimane promised the residents that he would give them feedback after a week.