We reported a leaking standpipe 18 months ago. It is still leaking 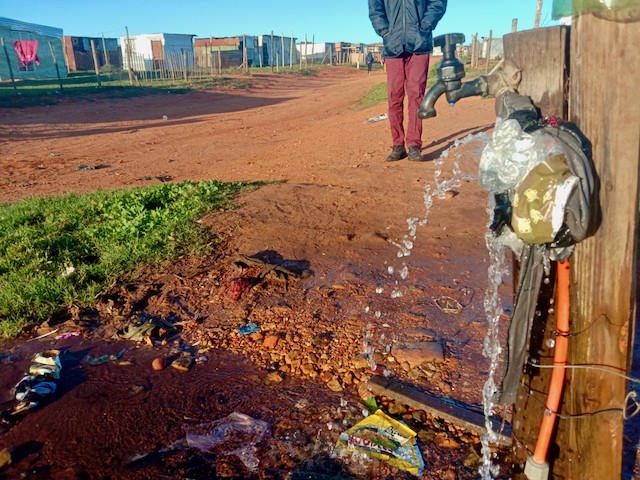 Residents say this standpipe has been leaking for more than three months in Gunguluza, Kariega. They say there are several taps in the settlement that have been leaking precious water, some for years. Photo: Thamsanqa Mbovane

As Nelson Mandela Bay Municipality battles a lengthy drought and critically low dam levels and urges its residents to use no more than 50 litres per person per day, leaks in informal settlements continue to test its efforts.

Eighteen months ago, GroundUp reported on leaking standpipes in some of the city’s 156 informal settlements. The municipality told us back then it was “winning the war against leaks”. Between May and November 2020 it had fixed 16,000 leaks, it said.

However, we have found that some of the same taps we reported leaking in 2020 are still leaking.

Residents say taps are not fixed properly or the repairs don’t last because taps are not maintained. Also, new taps which were shoddily installed during upgrades to informal settlements start leaking as soon as they are connected to the water supply, and this has added to the problem.

Siyabonga Stemele, chairperson of the Development Committee in Area 11 informal settlement in ward 45, Kariega, said, “We do not know what language we should speak to get the municipality to fix our broken and leaking taps … Hundreds of litres of clean water are still running down the streets for over two years now, unattended.”

He said the running water had created numerous potholes.

“Taps in shacks were installed last year, but when valves were opened for water to come out, we saw more leaks,” said Monwabisi Banjwa, a community leader in Khayamnandi Extension, ward 41, Despatch.

He said, “Since 2019, sewer drains and leaking taps have been fixed on and off, but remain leaking and spewing still. The infrastructure in our area is old and bad. Leaking underground water is causing dozens of newly-installed electricity poles to swim in water and they stand skew.”

Siyakhumbula Pikini, a community leader of KGS (Kiva, Gqabi, Sonto – three streets where shacks were erected) in Khayelitsha, ward 43, Kariega, said they report leaks to the municipality but these are not fixed; some have been leaking for two years.

Dave Turner, deputy director of the City’s water directorate, pleaded for his work teams to be protected so that they could fix leaks.

“As long as there will not be burning of municipal vehicles and intimidation of staff, we will fix the standpipes and add more,” Turner told leaders of informal settlements last week. He said there will be additional standpipes installed on R Alexander Road this week in area 11, Gunguluza. This was in response to protests in late July.

According to the municipal water dashboard, it fixed 3,594 leaks in the past four weeks and has 488 reported leaks outstanding. Current usable dam storage is at 9.67% of combined capacity.

Luvuyo Bangazi, spokesperson for the Metro Joint Operations Committee on Drought Mitigation, asked GroundUp to send reference numbers, street names and names of the affected informal settlements for his attention.

Next:  Bring back our police station, say Walmer residents