Refugees wait for months in Musina for temporary permits

Refugees at a Musina shelter say they have been waiting months for the Department of Home Affairs to consider their requests for asylum.

The men’s shelter at the Musina Ministry of Compassion church, Matswale, at times houses up to 800 refugees, according to Isabel Raisedza, who runs the shelter.

Resident Lulela Heritier, 25, says he has been waiting for temporary asylum papers since he arrived in April.

Heritier fled from the war in South Kivu province of Democratic Republic of Congo. When fighting broke out in his village, Kaezimiya, he fled, without money or his possessions. He only managed to grab his ID.

“I had to sneak out of the war zone that night. The following day I met some church leaders who helped me get transport to Zambia. From Zambia I pleaded with truck drivers who were heading for South Africa. They could only drop me in Zimbabwe, where I again met truck drivers who took me to Beitbridge,” says Heritier.

“At that office I met other refugees who directed me to the men’s shelter at the Musina Ministry of Compassion church, Matswale. The conditions are not good but it’s better than living in my own country,” says Heritier, adding that he has no blankets, making nights very uncomfortable.

Since then he has visited the Reception office several times without success,

There were about 200 people in the shelter, in four tents. A few were sharing mattresses but most slept on the floor. The church can only offer them accommodation and a place to bath. Refugees have to find food for themselves.

On rainy days water comes into the tent and the refugees cover themselves with plastic bags. The floors are sand. In the morning those who have blankets roll them up and pile them inside the tent. Mattresses are put outside.

They cook food outside the tents. When it rains and they cannot light fires, they buy or beg for cooked food. 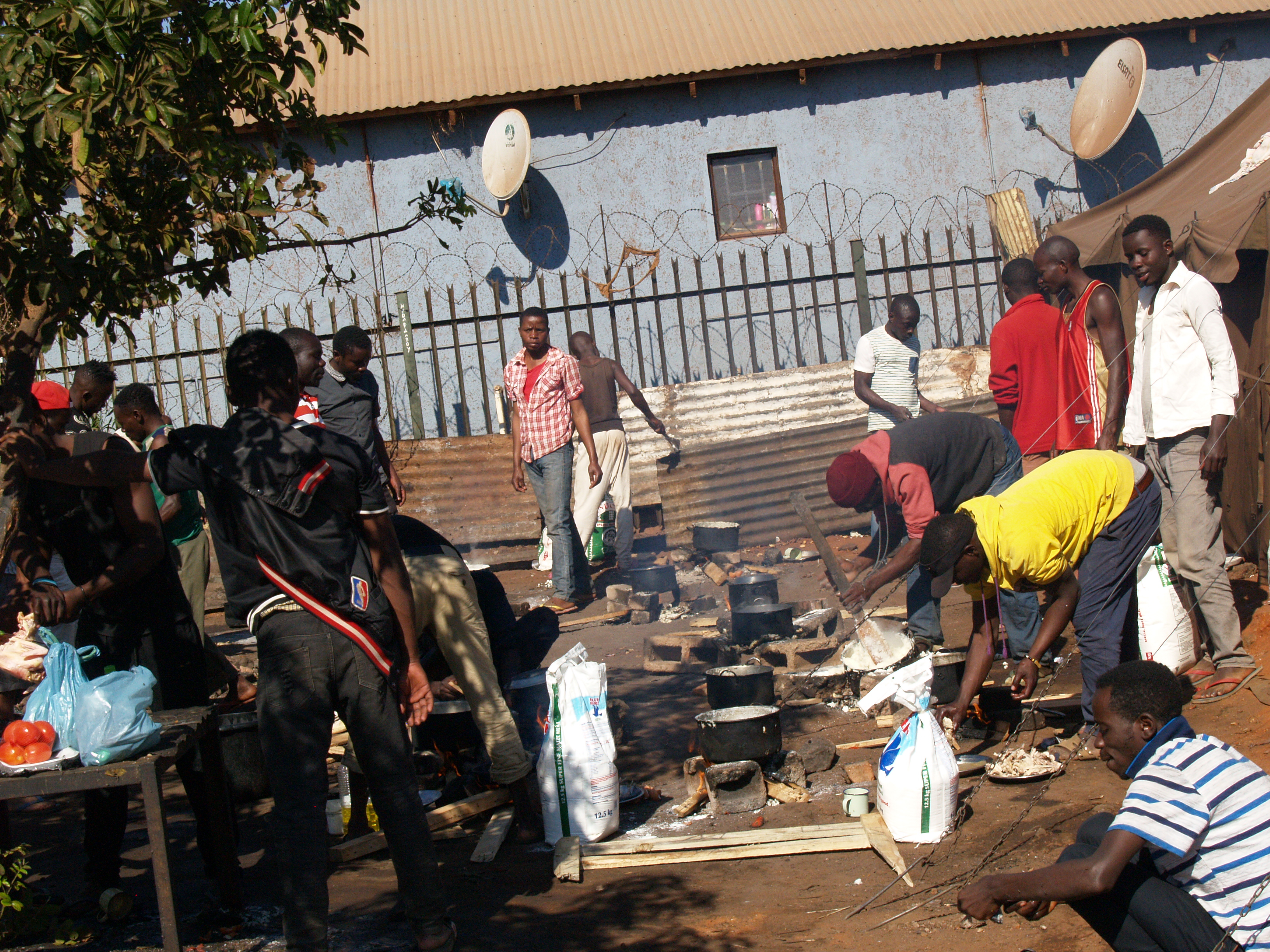 There are three toilets and three bathrooms which they keep clean themselves.

Benny Mulamba from Haut Katanga province of DRC walked to Zambia when severe fighting broke out in his province in February. He stayed in Zambia for about two months, then was helped by truck drivers to get to Zimbabwe. He arrived in South Africa in May.

Mulamba, who worked as a teacher in DRC, says he is waiting for asylum papers so that he can look for work.

GroundUp sent questions to David Hlabane, Department of Home Affairs media liaison officer, on 24 June, asking why it takes so long to process temporary asylum papers. Follow-up calls to his cellphone and landline were unanswered. On 27 June, Hlabane asked for information about specific cases, which was supplied the same day. Follow-up calls were again unanswered. After GroundUp approached Acting Director General Thulani Mabuso, Hlabane finally responded on 2 July: “The matter you have raised with us is receiving attention. Feedback will be provided once investigations are concluded.”

Raisedza says the church has been running the shelter since 2005. Numbers of refugees have dropped since the Zimbabwean Special Permit system was introduced.

“My wish is to feed them but I have no resources,” says Raisedza.