A number of RDP houses were set alight in East London on Wednesday following mass evictions of the occupants.

In October 2018, a group of residents, who had not qualified for houses, occupied RDP houses in Fynbos.

In June, Buffalo City Metro Municipality (BCMM) went to court to have them evicted.

This week the East London Magistrates Court issued an order to evict the occupants of about 300 RDP houses.

Evictions started on Tuesday. Clashes erupted between the occupiers and those claiming to be the legitimate beneficiaries. Police used rubber bullets and stun grenades to break up the fight.

Then a group of people claiming to be the rightful owners of the houses assisted the Sheriff with the evictions.

RDP houses were torched and windows stoned, allegedly by the evictees.

Bhongo Thembani said he was part of the group helping the Sheriff. “Those who have been living illegally were evicted and rightful owners moved in immediately, but after police left, illegal occupants forced themselves back in those properties again.”

Anna Wildvogel was among those who moved in on Wednesday. She welcomed the evictions. “I have been in the housing list since 2003. It was very painful that my house was unlawfully taken by illegal occupants. I’m very happy.”

But many of the evicted occupants say they have nowhere to go.

Done Carlese said the Sheriff has taken all her belongings, including groceries and goods she had bought for a Christmas party for elderly citizens.

“The situation will have a major impact for the children that I’ve been feeding because I’ve been running a soup kitchen … Many people here have nowhere else to go,” she said.

Some have tried to characterise the conflict as racial. Roderick Warrie, who was evicted, said, “This is unfair for coloured people because we were also born and grew up here, we don’t have homes like the people that are given these houses. This is a problem of housing allocation in this city. It favours a particular group … This is supposed to be our government and when it is allocating houses we need to be treated fair and equal.”

“Some of us have children that are going to school and are writing matric. How are they supposed to cope with exams?” he asked.

Spokesperson for BCMM Samkelo Ngwenya said police and law enforcement maintained their presence on the ground while the metro and Eastern Cape Human Settlement department are looking at resolving the tensions. 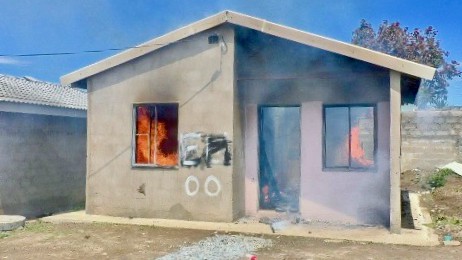