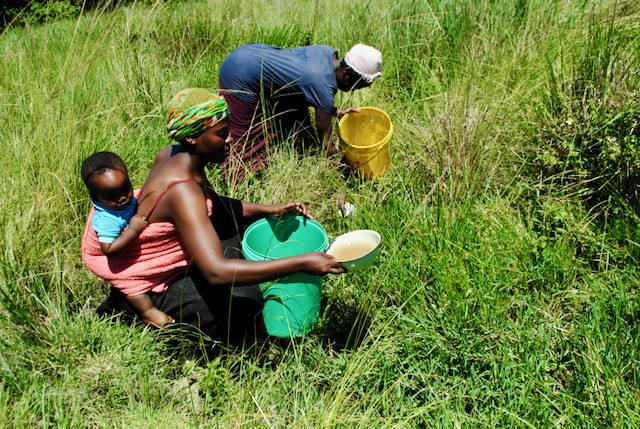 Abenathi Msindo with her niece on her back and Thandokazi Lubeni draw untreated water from a spring in Mamolweni Village in Ngqeleni. Photos: Mkhuseli Sizani

Thousands of households in ward 25 in Ngqeleni, a town about 35km from Mthatha, are drinking untreated water from springs and rivers shared with animals. This, according to a local chief, is despite a R14-million water installation project by OR Tambo District Municipality.

Frustrated villagers blame Simphiwe Magungxu, a municipal water operator and plumber for the area. He blames the municipality.

According to Magungxu the project started in 2005 and it was meant to supply tap water to over 20,000 households in Lwandile, Ngojini, Mamolweni and Mngcibe villages.

But when the project was completed, the water pressure was too low and the generators too weak to pump water to the higher lying villages.

There has also been a lack of maintenance and repairs. In Lwandile, a pressure tank has been damaged since November last year. In Mngcibe, a water pipe has been broken since June 2021 and the district says it is struggling to get the right size of pipe, says Magungxu.

In Mamolweni and Ngojini villages, a house has been built over the water pipe. Whenever water flows through the pipe, it leaks into the house damaging it, resulting in the owner complaining and the water being turned off.

Many of the taps in the area are broken and need replacing.

Magungxu says things have become so fraught that he no longer attends community meetings at the royal house. He says insults are hurled at him and he is accused of being useless. “I always tell them that I am just a worker.”

Magungxu says he sends reports to the district but it delays buying taps and pipes to fix the leaks.

Abenathi Msindo, from Mamolweni village, says: “This project was a disaster from the beginning. We only received two water taps for about 250 households. There were serious confrontations between villagers in the long queues at these taps.”

“After a year our taps dried up and we reported our problem to the royal house. But we still have no water,” she says.

Village women now scoop up untreated water from a spring.

Msindo says she goes at 5am to fetch water before domestic animals “pollute it”. She complains about the quality of the water and claims it changes the colour of her family’s mealie meal porridge to brown. “We always have running stomachs,” she says.

Xoliswa Mhlaba of Mtakatye Junior Secondary School in Mamolweni says the school buys water monthly to keep the school nutrition programme going. “Sometimes we are unable to cook for two to three days when our [water] supplier has many bookings.”

Thozama Mazokwana, a teacher at Mngcibe Junior Secondary, believes the water crisis and the terrible state of the school’s pit latrines have caused the number of learners at the school to drop from 700 last year to 570 this year.

She said the school spends R9,600 a month on water.

Chief Thulani Sithelo of Lwandile said that this was a R14-million project that was initiated by his late father, chief Zwelandile Sithelo, with the hope that his people would have access to clean water. “But this project has been a huge disappointment.”

“Before the national elections in 2019 the municipality promised to buy us three big water tanks to help the affected villages. But after we voted for them we never heard from them again,” he said.

Zimkhita Macingwane, a spokesperson, said that the municipality is planning its five-year term and “villages like Lwandile will be taken into consideration”.

She would give us no further details. 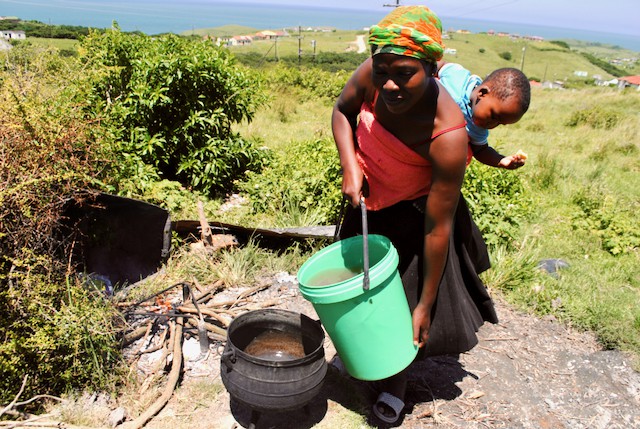 Abenathi Msindo pours water in a pot in order to cook porridge for her niece.

Next:  Activists launch movement against xenophobia