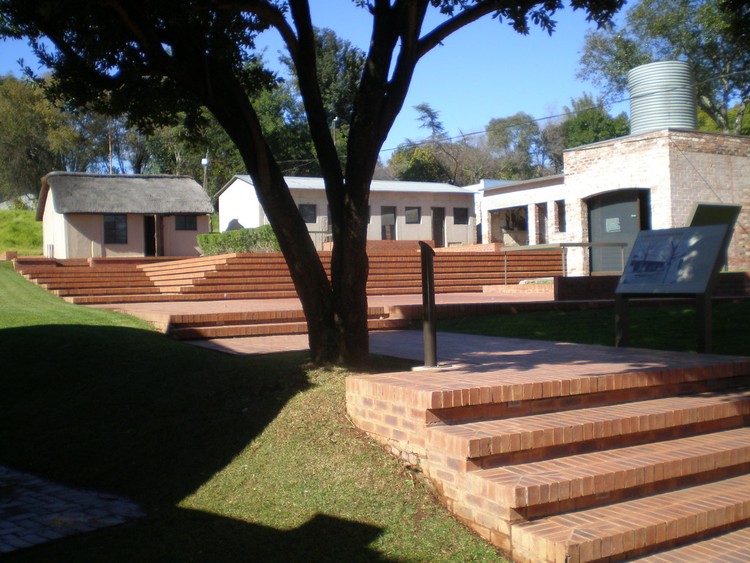 Now a museum, Liliesleaf Farm served as the secret headquarters for the ANC, SACP, Umkonto we Sizwe and the Congress Alliance. in the 1960s. Photo: Original buildings, including the thatched cottage by SA-Venues.com on Flickr (licensed under CC BY 2.0)

The future of the historic Liliesleaf Farm, a declared heritage site but privately-owned museum, is uncertain. Its CEO has been suspended for allegedly misspending a government grant. The Department of Arts and Culture (DAC) is now moving to establish the museum as a cultural institution, which would enable the DAC to exercise control over it.

Between 1961 and 1963 the farm served as the secret headquarters of the ANC, SACP, Umkonto we Sizwe and the Congress Alliance. A raid by the police in 1963 led to the capture of ten activists and resulted in the Rivonia Trial, which saw the life sentencing of Nelson Mandela, Walter Sisulu, Denis Goldberg, Govan Mbeki, Ahmed Kathrada, Raymond Mhlaba, Elias Motsoaledi and Andrew Mlangeni. James Kantor and Lionel Bernstein, also on trial, were acquitted.

The farm was bought by the Schreider family, not too long after the Rivonia Raid, and turned into a guest house. But when Nicholas Wolpe, nephew of James Kantor and the son of Harold Wolpe (both SACP members integral to the original purchase of the farm for the struggle) organised a reunion of the trialists in 2001, he decided to establish a trust to take custodianship of the site and create a museum.

Until now, Wolpe was the visionary behind the museum. He has been extremely hands-on in setting up of exhibitions and the telling of Liliesleaf story. He was born a few months before the Rivonia Raid.

The farm was declared a National Heritage Site in 2016 and it is nominated for World Heritage status as part of the Liberation Route World Heritage Nomination Project.

But in September 2021, Wolpe announced the closure of the museum, citing financial troubles.

Speaking to the media at the time, Wolpe said that the Covid pandemic had delivered a blow to ticket sales, and he decried Minister of Sports, Arts and Culture Nathi Mthethwa’s lack of support for the museum.

Almost immediately the DAC responded: R8.1-million it had granted to the museum in 2015 had not been properly accounted for.

Interviewed by Mandy Wiener on Radio 702 in September, DAC director-general Vusi Mkhize said, “The 2015 Memorandum of Agreement (MoA) was clear that Liliesleaf would use the money for the improvement of the exhibition infrastructure, not for operations.”

The DAC had already paid R8.1-million of a R9-million grant to Liliesleaf and was withholding the remaining R900,000 until the museum could account for the R8.1-million, according to Mkhize.

“There were clear terms and conditions and [Wolpe] signed for those and he is fully aware of them, so he cannot come back and say, ‘I accounted for the money using it for different things that were not part of the MoA’,” Mkhize said.

The board of trustees issued a press statement saying that they were caught off guard by Wolpe’s closure of the museum. Such a decision had to be made by the board, unanimously, the board said.

“At the core of the breakdown [in the relationship] has been unsatisfactory reporting and accountability from the side of the CEO, to the dissatisfaction of the trustees,” Wakashe, who acts as the board’s spokesperson, told GroundUp.

“For the CEO to unilaterally take that decision is very problematic,” he said.

On 10 March 2022, the board suspended Wolpe after a forensic report found that the reporting on the R9-million DAC grant was “inconclusive”, according to Wakashe.

Wolpe declined to speak to GroundUp in light of his pending disciplinary hearing. But in a past interview with Cape Talk, he said that he had no choice but to close the museum as the money had dried up and he had been told not to speak to the board until the forensic audit was completed.

He said he had submitted reports on the R9-million grant to the DAC which were rejected because they did not speak to the MoA. Wolpe conceded that the grant was spent on operational expenses, not on the special project the grant had stipulated.

According to Wakashe, the museum has been closed to the public since September 2021 and will be opened again in September 2022 to coincide with Heritage Month. In March, R7-million was paid by the DAC into the account of Freedom Park, to assist in paying staff salaries.

Answering questions in Parliament in March, Minister Mthethwa said that a “turnaround strategy” is being implemented by the board.

“A team comprising the department, Liliesleaf board and Freedom Park is implementing a process towards the declaration of the Liliesleaf Museum as a cultural institution in accordance with the Cultural Institutions Act,” Mthethwa told MPs.

Declaring Liliesleaf as a cultural institution would enable the minister to exercise significant control over the museum and also enable Parliament to exercise oversight.

The Act enables subsidies to be paid by the DAC and regulates the sale and movement of artefacts and immovable objects within the museum.

Cultural institutions are controlled by councils appointed by the minister. A 2001 amendment allows the minister to dissolve the council “on any reasonable grounds”.

In the case of Liliesleaf, the board and CEO would not be guaranteed their current positions if it was established as a cultural institution.

The CEO is appointed in consultation with the minister. The minister receives annual reports from cultural institutions and these are also presented to Parliament. The Auditor-General audits the accounts.

While still CEO, Nicholas Wolpe had resisted the establishment of Liliesleaf as a cultural institution.

But Themba Wakashe says all board members are in agreement. He told GroundUp that the discussions about declaration had been happening while Wolpe was still in his position, and that Wolpe held a different view than that of the trustees.

The current funding from the DAC, Wakashe says, is based on individual projects that apply for certain funding, and that funding is not guaranteed. If the museum is declared, Wakashe says, “government has an obligation to fund that institution. There is a huge difference in terms of certainty, long-term planning, and sustainability of the institution.”

Before Liliesleaf was declared a National Heritage Site, the board at the time had resisted the declaration due to concerns over governance. These concerns were then resolved. Asked whether the board has similar concerns now, Wakashe said it did not.

“We think that to take an institution of the historical significance of Liliesleaf and not guarantee its future operations under a declaration, is short-sighted,” Wakashe told GroundUp. 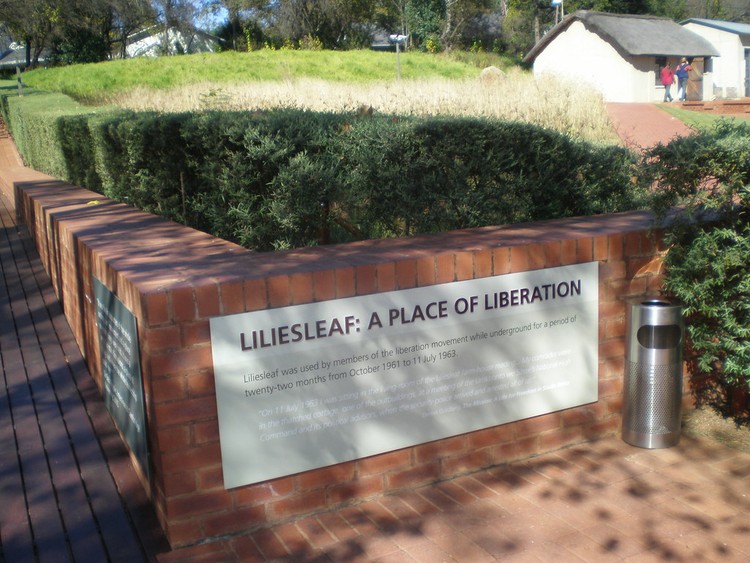 Photo: Liliesleaf - A place of liberation” by SA-Venues.com licensed under CC BY 2.0.

Wakashe confirmed to GroundUp that if Liliesleaf is declared, the maintenance of infrastructure will mainly fall under the ambit of the Department of Public Works.

This raises some concerns, given its patchy track record, says heritage practitioner Kathy Dumbrell. One needs a proactive property manager to maintain good communication with Public Works, she says, and even then the wheels turn slowly.

The Robben Island Museum is a case in point. Its infrastructure is ailing with grants going unspent. According to the museum’s 2020/21 annual report, R75-million of an infrastructure grant was unspent. Public Works is the implementing agent for the majority of that grant.

Liliesleaf will remain under the jurisdiction of SAHRA even if it is declared a cultural institution. SAHRA oversees all infrastructure maintenance and upgrades of national heritage sites, ensuring it complies with the National Heritage Resources Act, while the museum’s council and Public Works would be responsible for carrying out the work.

A Conservation Management Plan, a crucial strategic document that directs the maintenance and management of a heritage resource, has been in development by the National Heritage Council since the declaration of Liliesleaf as a national heritage site in 2016.

History captured by the ANC

Liliesleaf houses a number of important artefacts, including the original copy of the Freedom Charter. Other items of interest include the arrest warrant for Nelson Mandela and OR Tambo’s pen-gun. Non-fungible tokens (NFTs) of these items were auctioned off earlier this year - the arrest warrant NFT was sold for R1.9-million and the pen-gun NFT about R800,000.

The exhibitions at Liliesleaf, according to its website, focus on “the story of the journey to democracy” and keep “the history of our liberation alive”.

Speaking to the Daily Maverick in 2013, Wolpe said that as a child and young adult, he did not resonate with the politics of the ANC. In 1991, at the age of 28, Nicholas returned to South Africa. Harold died in 1996. After Wolpe was approached by the ANC in 2011 to organise the reunion at Liliesleaf, he decided to purchase the site and found the museum.

He told the Daily Maverick that Liliesleaf is “a place of memory” more than a museum. “In my opinion, a museum is man-made, whereas this has evolved out of history,” he said.

Wolpe said he is not interested in telling only the ANC’s side of the story. “I’m one of those who advocate the importance of preserving our collective history,” he told Daily Maverick.

“For instance, I believe that Vlakplaas needs to be restored, because it tells a particular aspect of our history, regardless of how painful and traumatic that history may be. It forms part of that mosaic of who and what we are as South Africans.”

Heritage practitioner Qhanita Samie, who is active in getting heritage sites declared in the Western Cape, says she is concerned by how Mthethwa uses heritage resources for political gain, particularly those linked to the ANC liberation narrative.

Samie says that on three projects she ran, Mthetwa came in last-minute and took credit for the work, in some cases arranging his own declaration announcements and posing for pictures in ANC colours.

“While there are heritage practitioners actively working to change the heritage landscape and formal record, most often on a pro-bono basis, to reflect a broader narrative of South African history and heritage, the ANC, through its desperate need to claim heritage - is doing such efforts a huge disservice,” Samie told GroundUp.

The Department of Sports, Arts and Culture acknowledged but did not respond to our questions.

Wakashe told GroundUp that he would not support any move to make the Liliesleaf story an ANC story. “I would be extremely disappointed if we look at the heritage of our country purely through that labour union, that political organisation, and so forth,” he said.

Speaking “not as a trustee, but as a South African … I think that as South Africans, we have got an obligation to feel that concept of reconciliation, Rainbow Nation, and nation-building, and we should look at our heritage in that context,” Wakashe said.

Next:  Eight years after Michael Komape’s death we visited Limpopo schools to see if their toilets have improved