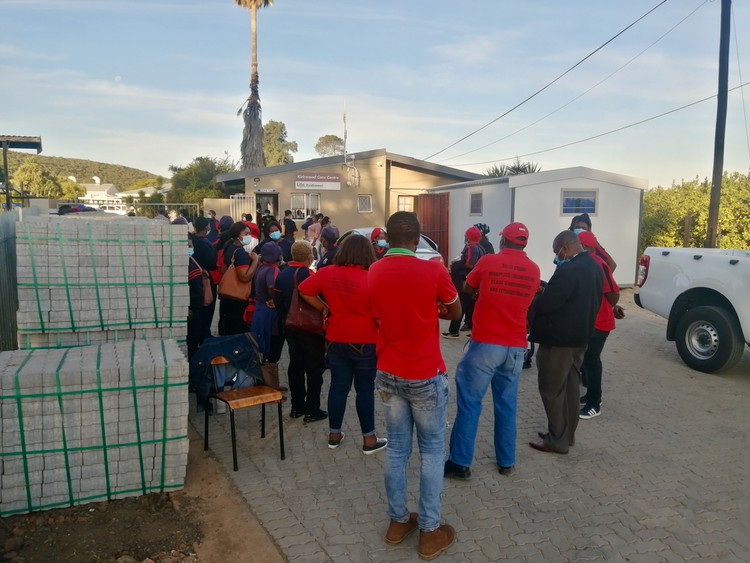 Life Esidimeni Care Centre is seeking an interdict against SANCO and NEHAWU after an incident at the Kirkwood hospital on Tuesday. Photo: Mkhuseli Sizani

The Life Esidimeni Care Centre in Kirkwood plans to file an urgent application at the Eastern Cape High Court in Port Elizabeth against National Education Health Allied Workers Union (NEHAWU) and South African Civic Organisation (SANCO) to interdict them from interfering with its operations.

This comes after a meeting on Tuesday morning between SANCO, NEHAWU and hospital management was disrupted, according to the hospital. The parties called the meeting after the Eastern Cape Department of Health released statistics last week about 35 Covid-19 cases at the hospital and six deaths.

The hospital said staff and patients had been put at risk. Police had to be called.

On Wednesday, the Department of Labour was approached by NEHAWU to inspect the hospital and to check whether it was meeting precautionary measures against Covid-19. SANCO threatened to approach the local taxi associations to stop transporting workers to the hospital. It said they were posing danger to the community.

The hospital wants SANCO and NEHAWU to refrain from interfering with its business and intimidating employees such as blocking access, entering the premises without permission, inciting or threatening to incite employees or the public to “close down” the hospital.

SANCO said it will challenge the court application.

Mxolisi April, sub-regional chairperson in Sunday’s River, said, “This shows their arrogance. What they wrote here – none of it is true. We entered there with their permission.”

“Right now I am in self isolation because one of the staff members who I was in contact with has tested positive on Wednesday.

“I am currently giving my lawyer a statement of what had happened on that day. He will advise on the next step to take as I am in self isolation,” he said.

Next:  Covid-19: Why is important data being kept secret?